Mistletoe and crime! Police forces reveal what action they will take against families breaking Covid orders at Christmas – as a fifth of Britons say they WILL flout rule-of-six

More police forces from across the UK have confirmed they will enforce coronavirus restrictions if they are broken over Christmas – as nearly 20% of families said they would ignore the Rule of Six.

A MailOnline investigation into the England and Wales’ 43 constabularies has uncovered differences in approach ranging from intervening in gatherings to welcoming visitors.

But other forces have been unable to plan their tactics, because they simply have no idea what Tier – and the subsequent rules – their area will fall in by December 25.

It comes after a YouGov poll revealed just 68% of respondents would abide by the Rule of Six over the size of social gatherings.

The possibility of large groups receiving a knock on the door as they settle down for Christmas dinner was first hinted at yesterday. 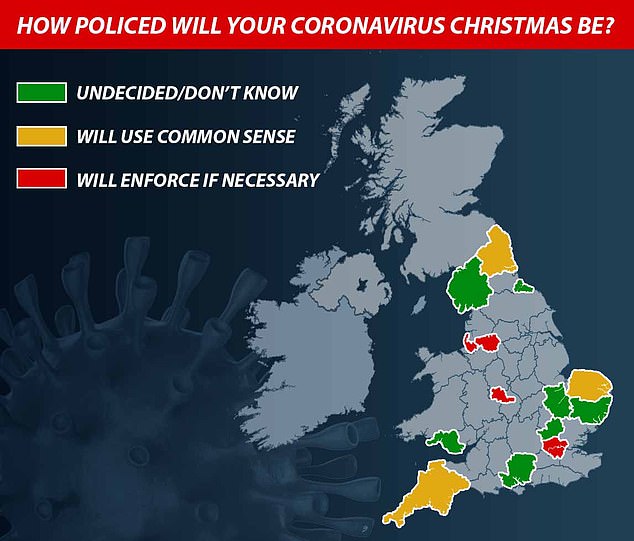 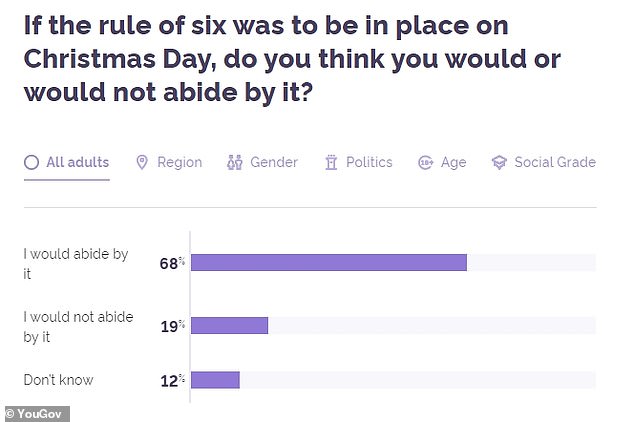 Greater Manchester Police, the Metropolitan Police Service and Merseyside Police all directed enquiries to a statement confirming they could ‘enforce as a last resort’.

The National Police Chiefs’ Council comment said: ‘We understand that this is a period where people want to be with their loved ones, celebrating this holiday.

We police against the regulations that are in law, and everybody has their part to play to help protect local communities and loved ones and we are confident people will adhere to the rules and help us to reduce the risk of transmission. 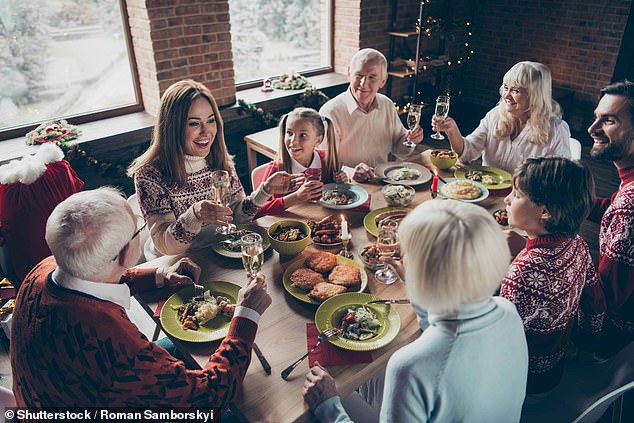 What is the Rule of Six?

‘The police’s approach remains to engage, explain and encourage people to follow the rules in the first instance and enforce as a last resort, where there are clear breach of the rules taking place.’

A spokesperson for Merseyside’s Police and Crime Commissioner Jane Kennedy added: ‘Enforcement is always a last resort but will be used where necessary.’

On Tuesday David Jamieson, the West Midlands police and commissioner, said officers would investigate reports of rule-breaking over the festive period.

He said: ‘If we think there’s large groups of people gathering where they shouldn’t be, then police will have to intervene.

‘If, again, there’s flagrant breaking of the rules, then the police would have to enforce.’

The approach was softer in some areas, with Norfolk, Cumbria, Hertfordshire, and Devon and Cornwall saying they would be ‘sensible and fair’ and did not mention enforcement.

Alison Hernandez, Police and Crime Commissioner for Devon, Cornwall and the Isles of Scilly,said legal gatherings of six were still possible. 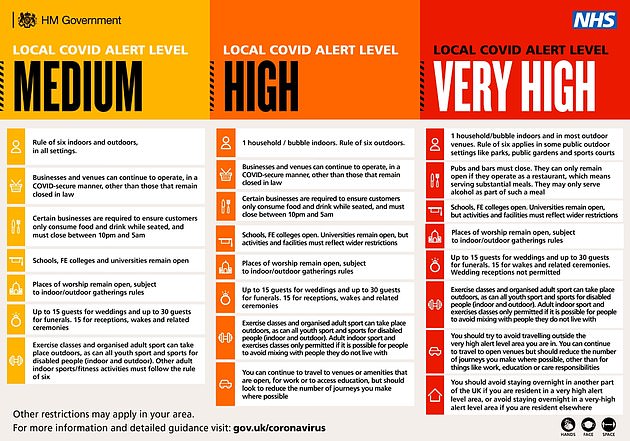 WHAT ARE THE RULES IN DIFFERENT TIERS OF LOCKDOWN?

Tier one restrictions mirror those already in place across England.

These include the rule of six, a 10pm curfew, group sport to be played outdoors only and a maximum of 15 guests at wedding ceremonies.

Two households may be allowed to meet in a private garden and public outdoor spaces, as long as the rule of six and social distancing are followed.

Tradespeople – such as plumbers and electricians – can continue to go into a household for work.

Restaurants can open, but only until 10pm.

Pubs and bars will be ordered to close unless they also operate as a restaurant.

This definition extends to pubs which sell ‘substantial’ meals, which like restaurants will be allowed to stay open but only serve alcohol to people eating a meal.

Locals are advised only to leave their areas for essential travel such as work, education or health, and must return before the end of the day.

Overnight stays by those from outside of these ‘high risk’ areas are also be banned. Households are not be allowed to mix either indoors or outdoors.

She told MailOnline: ‘Exceptions to the rule of six include support bubbles, so even if there’s no change to the regulations by Christmas people will be able to gather with support bubbles that could include an adult who lives by themselves or an adult with children under the age of 18.

‘Just as I have done with my mum. Christmas is a really important time of year, it can also be a time of huge stress for people, and while many are enjoying themselves we also see annual increases in levels of domestic violence and suicide.

‘I’d urge people to make sensible, practical plans for the Christmas break that take account of the rules that protect our most vulnerable, but also those who might experience bouts of loneliness.

‘It’s also a tough time of year for emergency services workers, who will be working while others relax and enjoy themselves.

‘We can all make their lives easier by obeying by the simple regulations set out by Government.

‘Devon, Cornwall and the Isles of Scilly are low risk counties in terms of Covid-19 risk and so providing people are sensible and respectful, we will be welcoming visitors from parts of the country with similarly low infection rates.’

Police approach in other areas was not as clear, with forces unable to answer for varying reasons.

Northumbria Police explained: ‘This isn’t something we would be able to comment on at this time as we do not know which restrictions will be in place over the Christmas period.

‘Our officers will continue to follow the national guidance and police using their common sense, like they have throughout the pandemic.’

South Wales Police said their tactics would be informed by Government policy at the time of the season.

A spokesman said: ‘It will depend on what restrictions are introduced by Welsh or UK government at the time.’

Suffolk, Cambridgeshire and Cleveland Police also said their approach would depend on what tier setting their districts were placed in.