Mother-of-three who was scalped, had her arms ripped off and colon torn out in brutal pit bull and German Shepherd attack is finally discharged from hospital after SEVEN weeks of hell as her sister reveals she may still lose leg

A mother-of-three whose arms were ripped off in a brutal pit bull attack has been discharged from the hospital after seven weeks – but could still lose her leg.

Kaylee Waltman, 38, sustained life-threatening injuries on March 21 when three dogs – two pit bulls and a German shepherd – attacked her as she was walking home from her boyfriend’s house on Honea Path Road in Abbeville County, South Carolina.

She passed out during the attack, and the dogs bit her so hard, they tore through the skin on her head until her skull was visible as they also tore off her eyelid and chewed into her colon.

Fortunately, Waltman was saved by local farmer Avery Presley, who blasted a gun into the air and kicked one of the dogs to get them to flee.

Now, after a grueling seven weeks in the hospital, she has returned to her mother’s house, her sister, Amy Wynne, told supporters on a Go Fund Me page Tuesday.

‘It’s been rough, but we’ve been trying to get her settled into her new life,’ Wynne, 41, wrote in an update on the online fundraiser for Waltman’s medical expenses. ‘She is a talker, lol… She is running our poor mama raged [sic] as the least.’

But, Wynne revealed, Waltman still faces several outpatient surgeries – including having her shoulder re-grafted and getting grafts to prevent her from losing her leg.

‘[The leg] is healing, but they have to pull her muscle up from her calf and see if that is gonna work,’ Wynne explained. ‘They did graft around the [wound] to see if it’ll take, and it did.’

She added that the doctors did not want to do both surgeries at once, so they did a three-hour long operation on Waltman’s shoulder first and will do another nine-hour long surgery on the leg at a later date. 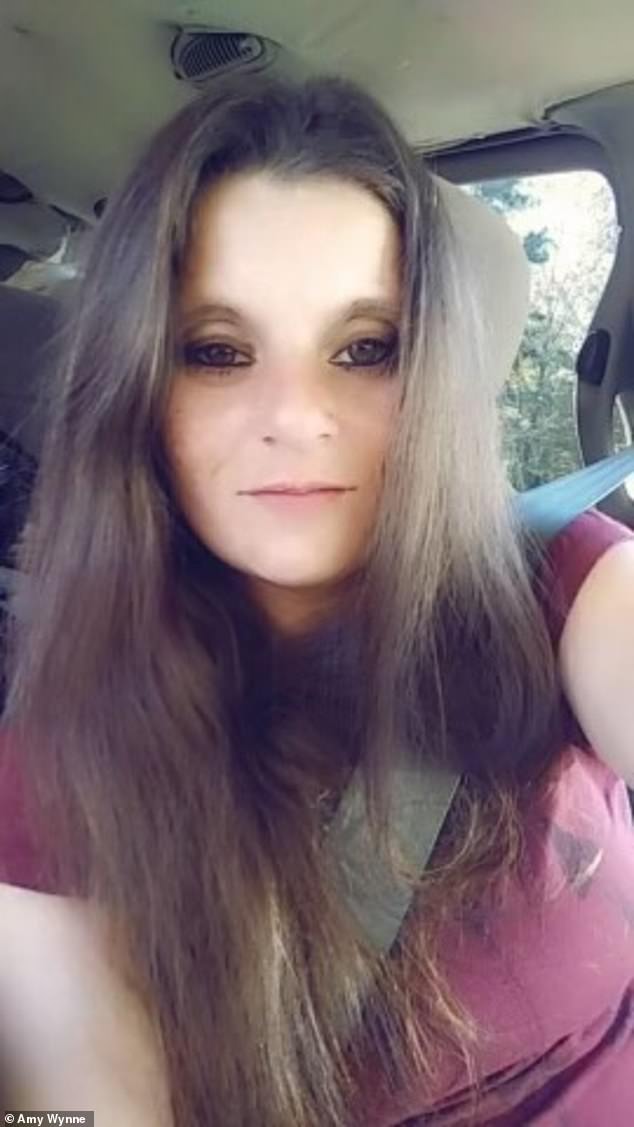 Kyleen Waltham, 38, was brutally attacked by two pit bulls and a German shepherd as she was walking home from her boyfriend’s house on March 21 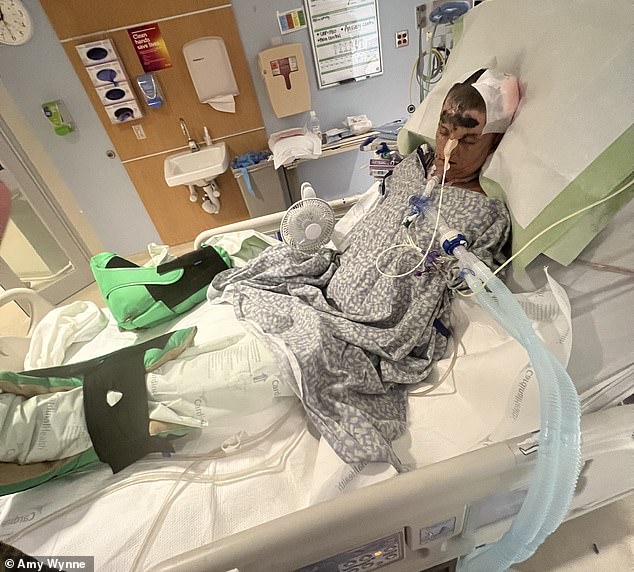 Waltham was finally released from the hospital on Tuesday after losing both her arms and needing a bag for her colon. She may also lose her leg. 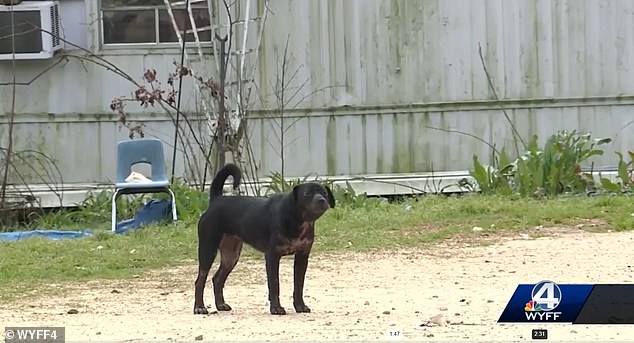 The dogs were euthanized following the attack, and their owner now faces several criminal charges

But the recovery has not been easy with Wynne revealing on Tuesday that their mother, 61-year-old Diane Johnson, has to take care of the 38-year-old.

They are hoping they can get an in-home care nurse, but so far Waltman has been denied Medicaid and disability coverage.

Meanwhile, Wynne revealed on Tuesday, her mother has been taking care of the 38-year-old as she has been denied Medicaid and disability.

‘So we have to do it all for her,’ Wynne wrote on the Go Fund Me, noting: ‘Mama takes the brunt of it because Kyleen lives with mama.’

Still, the family has raised more than $260,000 to help cover Waltman’s medical expenses.

She has already undergone more than a dozen surgeries to heal the wounds she suffered from the devastating attack.

Doctors have had to amputate both her arms and remove her colon, the Daily Beast  reports, and her shoulder bones had to be removed – which means she may not be able to get prosthetic arms.

But nothing could be done for Waltman until a month after the attack, as doctors had to wait for an infection from the deep bites to subside before they could stitch up the gashes on her forehead and scalp, Wynne previously told DailyMail.com.

‘She said doctors had to put 109 staples in the front of her head and at least 90 staples in the back of her head,’ Wynne claimed, adding that a trachea tube was placed in her throat because the bacteria from the dogs mouth got into her esophagus.

She also lost her vocal chords and now is now forced to speak using a voice-generated box.

Wynne went on: ‘My sisters blood pressure went down to 86 and that her organs were starting to shut down after the attack.

She told how Waltman nearly died three times – in the ambulance, helicopter and on the operating table. But she said: ‘She is alive.

‘They had to put in a colostomy bag and her appendix shut down and they put her on dialysis. Doctors are hoping to regrow the tissue for her colon.’

She added: ‘By the grace of God she has no brain damage.’

Doctors also tried to do skin grafting and remove skin from her buttocks and her shoulder to repair the missing skin on her left inner thigh and near the groin area.

But the infection was so severe they were unable to complete the surgery.

Wynne said she was just relieved farmer Presley had been driving back in a tractor to see his cows at the time.

She revealed he had yelled at the savage beasts but they did not respond so he fired a pistol he carried after the same dogs tried to attack him a few weeks earlier.

Wynne said: ‘Avery Presley saved her life. We have not met face to face yet but because of the investigation.’

‘He tried to get the dogs off of her. He fired a few shots in the air. My sister had already been passed out.

‘Two of the dogs ran but one dog stayed and kept attacking that is when he had to kick the dog off my sister and the dog ran.

‘He called 911 and tried to put pressure on her arms all that was left. They ate all the flesh on her arms. They had EMS out there. They have it all on bodycam.’

Wynne said she was in the courtroom at a preliminary hearing staring at the animals’ owner, Minor.

She said: ‘He [Minor] said that he trained the dogs to do exactly what they did to attack and kill. They were trained to kill.’ 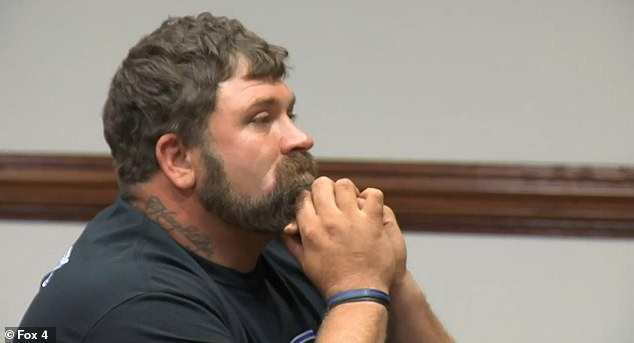 He was released last month on a $15,000 bond and may still face a penalty of $5,000 or a sentence of three years in prison. His case will be sent to a grand jury.

Wynne said: ‘It makes me so angry. He needs to be charged and put in jail. He needs to suffer like my sister is suffering.

‘She is not going to have a normal life now, her quality of life is gone.’ She said the laws in South Carolina are very lenient regarding dog attacks.

‘This breed [pit bulls] have got to die. There was another attack in Alabama and the person was killed.

‘Minor is not on house arrest and he can do whatever he wants,’ she added. ‘My mother saw him leaving a store carrying beer meanwhile my sister is not able to do anything anymore.’