A horrifying video shows the moment a man becomes unhinged while riding a New York City subway train and pummels an innocent bystander, whom the attacker blamed for starting the coronavirus outbreak.

The footage of the April 23 incident shows the attack taking place on a Bronx-bound, No 4. train as it approaches the 125th Street station around 6.30am.

The attacker is seen in the footage throwing about 40 punches at the bystander, who is Asian and appears to be homeless.

Other riders look the other way while being unable to maintain proper social distancing on the crowded train. 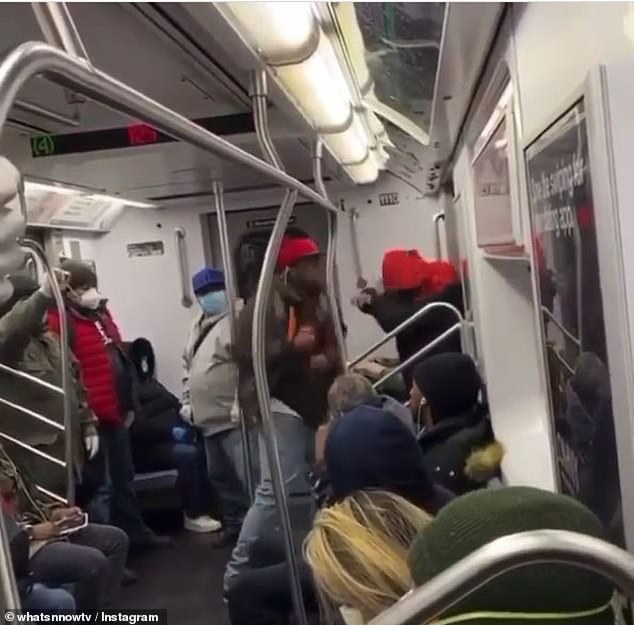 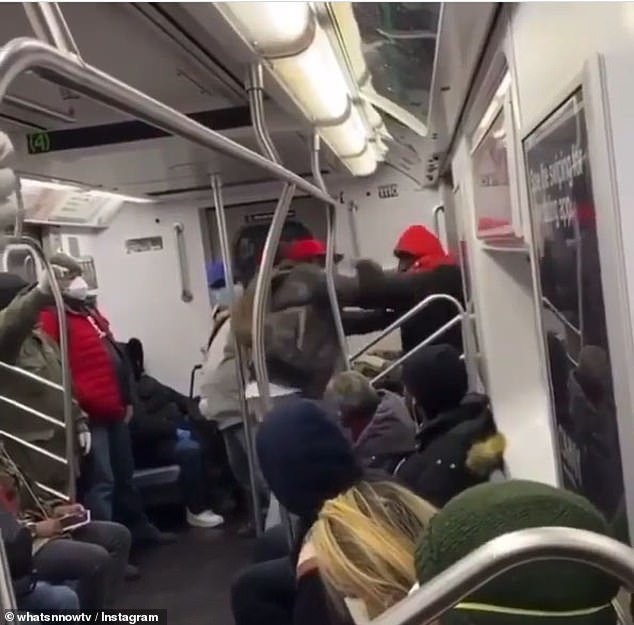 The footage of the April 23 incident shows the attack taking place on a Bronx-bound, No 4. train as it approaches the 125th Street station around 6:30 am. The attacker is pictured taking his first shot 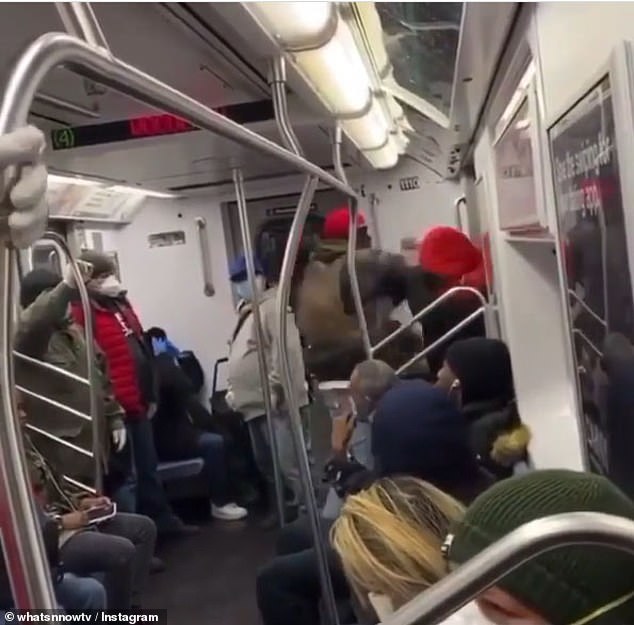 The victim in the video appears to be a homeless Asian man, says a witness, who was punched about 40 times during the assault (pictured) 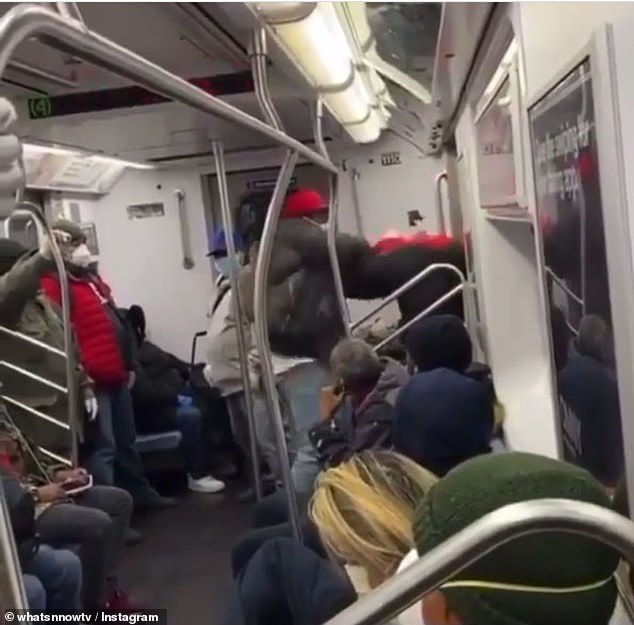 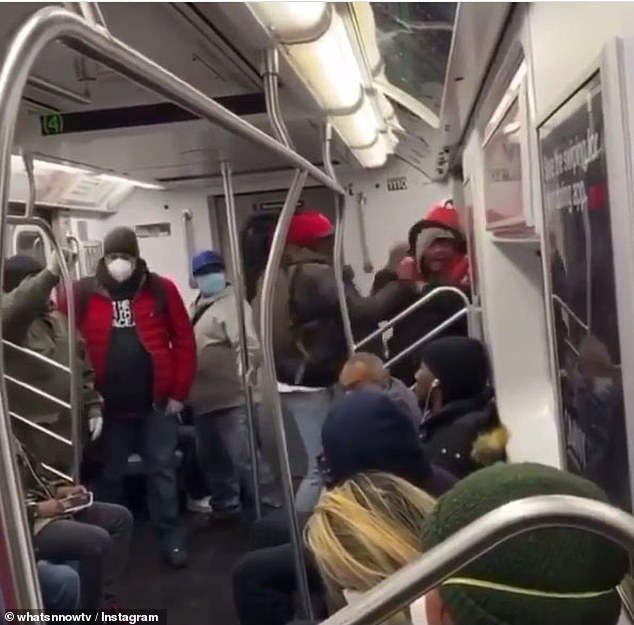 ‘The dude was talking about the Asian guy bringing corona over here so we all gotta wear masks — and all of a sudden punches are flying,’ a witness, who asked that his name not be used, told The Daily News.

The attacker’s mask slips off his face during the roughly 20-second assault, before he moves to another train car.

Some of the other straphangers came to the victim’s aid. He did not appear bloodied or seriously injured afterward, the witness says.

The NYPD says it had not received a complaint about the incident.

The attacker had complained about New York City Mayor Bill de Blasio allowing ‘trains to be busy and have homeless people,’ says the witness.

‘He was frustrated how packed the train still is after coming home from a long day working,’ the witness said about the attacker’s comments.

New York City has had 162,212 confirmed cases of the coronavirus, which has been blamed for 12,571 confirmed deaths and another 5,295 probable deaths. 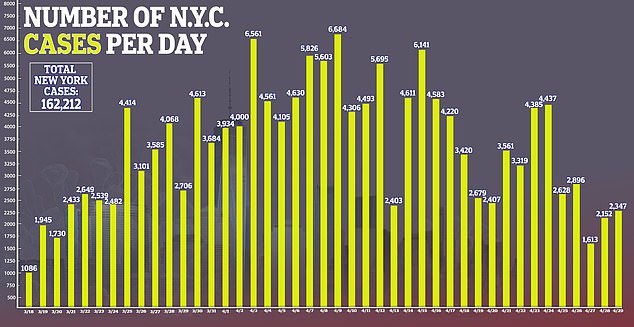 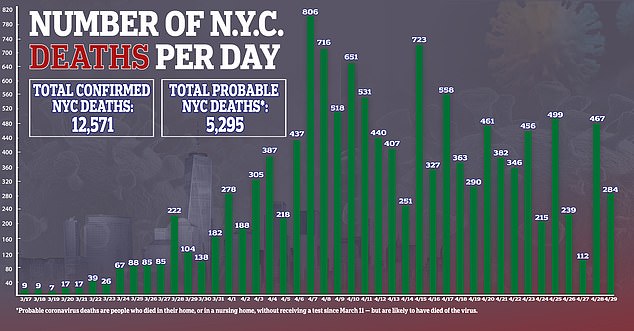 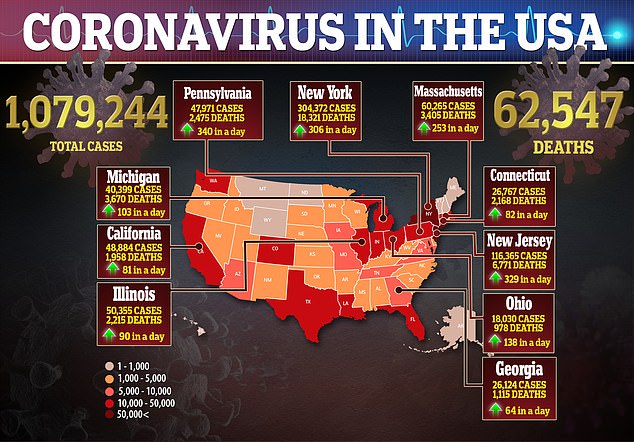 The subways have become a hotbed for crime during the outbreak with more homeless people moving into the all-but abandoned trains and creating what Gov. Andrew Cuomo called a ‘disgusting’ situation for all involved.

Since the pandemic exploded in the city, ridership has decreased by 90 percent as millions of people stopped going to work. Mostly essential workers now ride the trains and often in clusters to stay safe.

Other parts of the trains have been taken over by the homeless, who were able to move in almost permanently without disruption. Crime at the same time has spiked, including complaints of nudity, sexual activity, human waste and even arson.

On Wednesday, Cuomo instructed the MTA to present him with a plan for how to clean every train on the network nightly.

There have also been reports of increased attacks on Asian Americans since the outbreak began and was believed to have originated in a market place in Wuhan, China, last November.

The NYPD has investigated almost a dozen reports of hate crimes against Asian Americans so far this year, the News reports, nearly four times the amount reported a year ago.

The Asian Pacific Policy and Planning Council says that an online reporting center has received close to 1,500 reports of coronavirus-related harassment, many of them assaults.

‘This is a widespread problem with significant ramifications for our communities,’ Manjusha Kulkarni, executive director of the council, tells the News.