Can you spot the moment thief tricks shopkeeper in short-change scam? Man stuffs £10 note into his pocket as cashier hands him change from £20 – then claims she only gave him £5

A London shopkeeper has revealed how she was conned into giving £10 to a thieving customer after he fooled her into thinking she had given him the wrong change.

The woman, Nazanin Safizadeh, 24, fell victim to the criminal in the Local Off-licence, on the Holloway Road, in Islington, North London, on Sunday.

She shared CCTV footage with MailOnline which showed the moment the man quickly pocketed a £10 note from the change she had given him after he bought a bottle of water and a chocolate bar with a £20 note.

The unidentified man, who was wearing a high-visibility jacket emblazoned with the words ‘Social distancing’ and ‘keep 3 metres apart’, then told her she had only given him £5, prompting the shopkeeper to hand him more money. 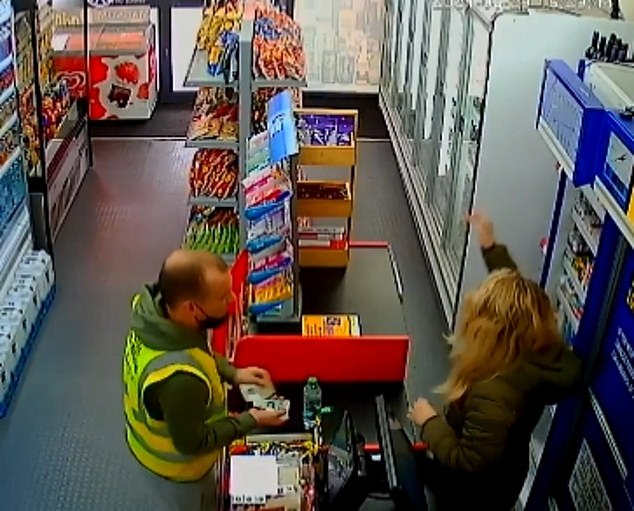 CCTV shows the moment a thief fooled a shopkeeper into handing over £10 by quickly pocketing change she had already given him and then telling her she owed him money. The scam took place in the Local Off-Licence on the Holloway Road in Islington, North London, on Sunday

She told MailOnline today that she felt ‘stupid’ about being duped.

Ms Safizadeh initially gave the thief £18.40 in change after he bought the confectionary and water.

Then, the man immediately asked where a nearby supermarket was to buy food, prompting Ms Safizadeh to turn to her right and point out of the window.

The man is then seen taking the opportunity to use his left hand to quickly swipe the £10 into his pocket while Ms Safizadeh isn’t looking.

He is then seen gesturing as he insists that Ms Safizadeh had only given him the £5 and the change. 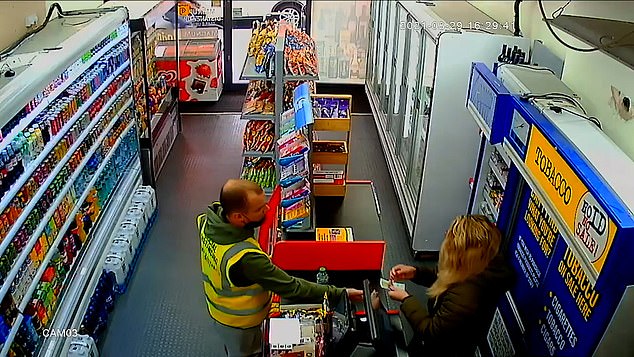 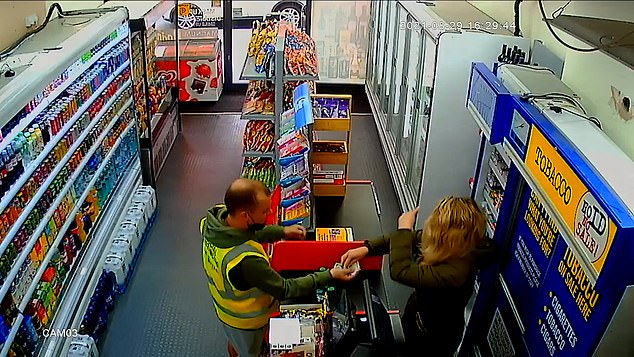 The thief is seen taking the money before he asks Ms Safizadeh where the nearest supermarket is, prompting her to turn her head and point

Although she was sure she had given him the right change, Ms Safizadeh was strong-armed into giving the man another £10.

‘I thought there was something wrong afterwards, I had to ask the owner of the shop to send the video to see what was going on and I saw that he put the £10 in his pocket.’ 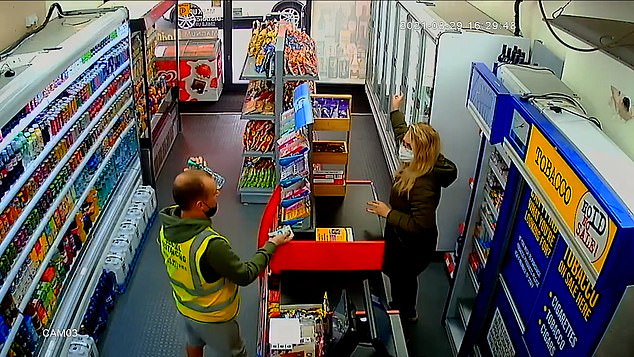 After quickly putting the £10 in his pocket, the man then tells Ms Safizadeh that she only gave him £8.40 in change, instead of the £18.40 he had been given after buying a bottle of water and chocolate biscuit for £1.60 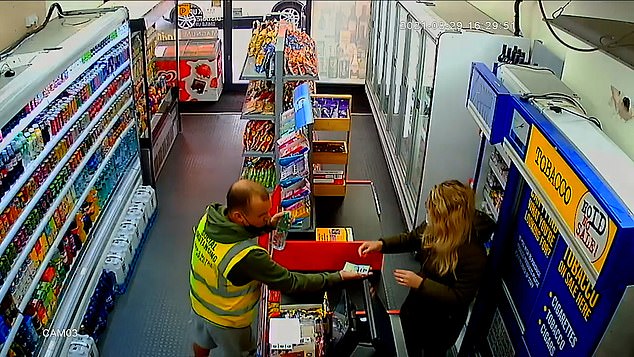 Iranian Ms Safizadeh, who has worked in the shop for three months, added: ‘I felt so stupid. I felt so bad; £10 is nothing but what is really going on these days? You can’t trust anyone.’

Ms Safizadeh, who has not yet reported the crime to the police, said she believes the man has carried out the scam many times before.

‘He had never been in the shop. I had never seen him before. But the way he did it, it looks like he always does it because he was so professional and so fast.

‘I was trying to look at his clothes, what he was wearing. I couldn’t find out what was under his high-vis jacket,’ she said.

Underneath the high-vis jacket, the man was wearing a green hooded top and grey shorts.