Mongolia quarantines region after outbreak of the PLAGUE

Mongolia has quarantined a region next to the Chinese border after an outbreak of the bubonic plague.

Two suspected cases of the plague – which is linked to the consumption of marmot meat – have been identified, health experts announced on Wednesday.

Lab tests confirmed that two unidentified individuals had contracted the illness in the region of Khovd, Mongolia’s National Center for Zoonotic Disease (NCZD) said in a statement.

The provincial capital in western Mongolia is now in quarantine.

According to local media, vehicles have been banned from entering the area temporarily. 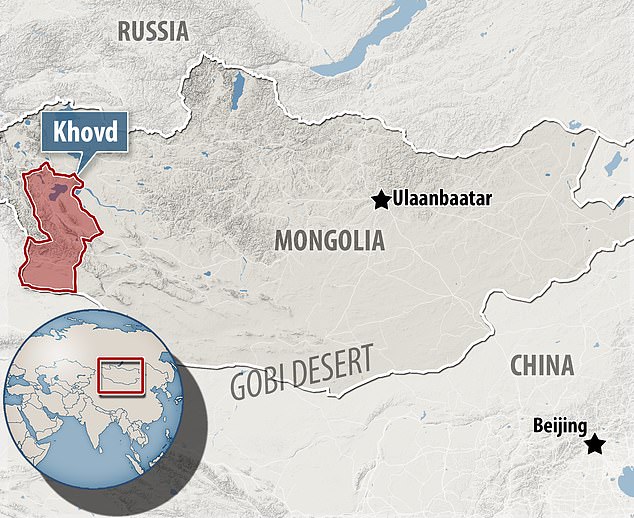 Lab tests confirmed that two unidentified individuals had contracted the illness in the region of Khovd (shown on this locator map), Mongolia’s National Center for Zoonotic Disease (NCZD) said in a statement

The NCZD analysed samples from 146 different people who may have had contact with the two individuals infected.

In addition 504 second-contact individuals were identified.

The bacterial infection can kill adults within 24 hours if not treated in time.

Local reports suggested that the victims were a 27-year-old male and a young woman, although her age is not known.

The plague is spread by fleas living on wild rodents such as marmots.

Two suspected cases of the black plague – which is linked to the consumption of marmot meat – have been identified, health experts announced on Wednesday. Pictured is a Mongolian marmot

It comes after a couple died of bubonic plague in the western Mongolian province of Bayan-Ulgii in April 2019, after eating raw marmot meat.

Some 158 people were put under intensive medical supervision in the province after coming into contact directly or indirectly with the couple who died.

Top medic Dr N. Tsogbadrakh said the plague had ‘affected the man’s stomach’ after he ate the meat and gave it to his wife.

The plague is caused by the bacterium Yersinia pestis, which is usually found in small mammals and their fleas.

The bacterium was linked to the Black Death which wiped out more than a third of Europe’s population in the 14th century and to subsequent plague outbreaks.

The disease is now treatable with antibiotics but hundreds of people have died of it around the world in recent years.

Since the 1990s, most human cases have occurred in Africa, according to world health bosses.

What is the bubonic plague and how does it spread?

Plague is an infectious disease caused by the bacterium Yersinia pestis, which is carried by fleas and transmitted between animals.

The bubonic plague – the most common form – is caused by the bite of an infected flea and can spread through contact with infectious bodily fluids or contaminated materials.

Patients may show signs of fever and nausea and at an advanced stage may develop open sores filled with pus.

It devastated Europe in the Middle Ages, most notably in the Black Death of the 1340s which killed a third or more of the continent’s population.

After the Black Death plague became a common phenomenon in Europe, with outbreaks recurring regularly until the 18th century.

When the Great Plague of 1665 hit, a fifth of people in London died, with victims shut in their homes and red crosses painted on the door.

Bubonic plague has almost completely vanished from the rich world, with 90 per cent of all cases now found in Africa.

It is now treatable with antibiotics, as long as they are administered quickly.

Still, there have been a few non-fatal cases in the U.S., with an average of seven reported a year, according to disease control bosses.

Some plague vaccines have been developed, but none are available to the general public.

The WHO does not recommend vaccination except for high-risk groups such as health care workers.

Without antibiotics, the bubonic strain can spread to the lungs – where it becomes the more virulent pneumonic form.

Pneumonic plague, which can kill within 24 hours, can then be passed on through coughing, sneezing or spitting.