More students and families from North Melbourne Primary School have been sent into 14-day isolation following Monday’s new positive case at the school, as health authorities seek to put “a ring of steel” around the city’s West Melbourne cluster.

Parents and carers who were previously categorised as lower risk, tier-two contacts learnt via a late-night text message from the Department of Health that they had been identified as close contacts of a child who has tested positive to coronavirus, and may have been exposed to the virus between May 25 and 27. They were directed to get tested, then isolate for 14 days. 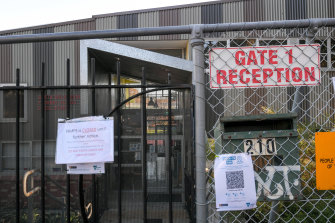 North Melbourne Primary School is closed due to an outbreak of COVID-19 affecting students and staff.Credit:Eddie Jim

The inner-city school of about 900 students has been forced to close during Victoria’s latest COVID-19 outbreak, with multiple students, staff and their family members testing positive to the highly infectious Delta strain of the virus.

More than 300 members of the school community had already been identified as primary close contacts and directed to isolate, but Deputy Chief Health Officer Allen Cheng said on Tuesday that number had increased following Monday’s reported positive case.

“I understand that all of the tier-two contacts at North Melbourne Primary have been upgraded to tier one and that’s because the case that was diagnosed yesterday is in a different grade to the two students that were diagnosed first,” Professor Cheng said.

Those two students are in year five and had previously infected a teacher at the school. Authorities did not say which grade the new case was in.

But COVID-19 response commander Jeroen Weimar said public health workers had a strong grasp of the movement of students and staff who were primary close contacts.

“We feel we’ve got a really strong field of control and multiple rings of control around the West Melbourne outbreak,” he said.

Health authorities offered hope to lockdown-weary Victorians on Tuesday, saying the state is on course for an easing of restrictions by Friday, including the resumption of face-to-face classes.

Acting Premier and Education Minister James Merlino cautioned that a decision on easing restrictions had not yet been confirmed.

“I cannot foreshadow anything … this is a day-by-day assessment, but we remain on track for easing of restrictions,” he said. “As Education Minister, as a parent, I want all kids back at school as quickly as possible.”

“Kids have lost enough time out of school over the last 18 months,” he said on Monday.

Melbourne students have experienced up to 27 weeks of disruption to face-to-face learning since the end of term one last year, either through remote learning or because school holidays were brought forward or extended. The government is spending $250 million on small group tutoring to help students catch up on lost learning.

Mr Merlino acknowledged that some students have suffered mentally and academically but said remote learning was a critical part of the state’s efforts to quell the coronavirus.