Russia said it had taken control of the port in Mariupol on Wednesday and that more than 1,000 Ukrainian marines had surrendered in the southeastern Ukrainian city, whose capture would free up forces for a wider offensive.

The capture of the Azovstal industrial district, where the marines have been holed up, would give the Russians full control of Mariupol, Ukraine’s main Sea of Azov port, reinforce a southern land corridor and expand its occupation of the country’s east.

Surrounded and bombarded by Russian troops for weeks and the focus of some of the heaviest fighting in the war, Mariupol would be the first major city to fall since Russia invaded Ukraine on February 24.

Russia’s defence ministry said 162 officers were among 1,026 soldiers of the 36th Marine Brigade who had surrendered to Russian and pro-Russian separatist forces near the Illich Iron and Steel Works in Azovstal.

Russian television showed pictures of what it said were marines giving themselves up, many of them wounded. 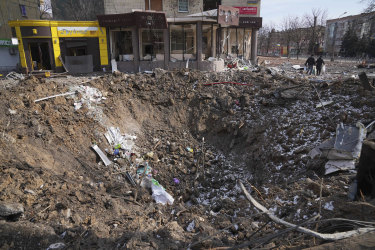 People walk past a crater from an explosion in Mariupol.Credit:

Ukraine’s general staff said Russian forces were attacking Azovstal and the port, but a defence ministry spokesman said he had no information about any surrender.

Reuters journalists accompanying Russian-backed separatists saw flames billowing from the Azovstal area on Tuesday, a day after Ukraine’s 36th Marine Brigade said its troops had run out of ammunition.

“Within Azovstal at the moment there are about 200 wounded who cannot receive any medical assistance,” Kadyrov said in a Telegram post. “For them and all the rest it would be better to end this pointless resistance and go home to their families.”

Tens of thousands of people are believed to have been killed in Mariupol and Russia has been massing thousands of troops in the area for a new assault, Ukrainian President Volodymyr Zelensky said.

“We have destroyed more Russian weapons and military equipment than some armies in Europe currently possess. But this is not enough,” he said in an online video, adding that if Ukraine did not get more tanks, jets, and missile systems, other countries in Europe would be the next targets of Russia.

Biden said he had spoken with Zelensky and his administration was authorising an additional $800 million in weapons, ammunition, and other security assistance to Ukraine.

Ukraine accuses Russia of blocking aid convoys to civilians marooned in Mariupol. Its mayor, Vadym Boichenko, said Russia had brought in mobile crematoria “to get rid of evidence of war crimes” – a statement that was not possible to verify.

The presidents of Poland, Lithuania, Latvia and Estonia became the latest in a string of European politicians to visit Kyiv but Germany’s president did not join them as he had planned. Zelensky said there had been no official approach and one of his officials denied a newspaper report he had rejected the visit due to Steinmeier’s recent good relations with Moscow.

The Kremlin denounced Biden’s description of Moscow’s actions in Ukraine as amounting to genocide, with spokesman Dmitry Peskov saying this was unacceptable coming from the leader of a country he said had committed crimes of its own.

International Criminal Court Prosecutor Karim Khan said after visiting Bucha, a town where bound bodies of people apparently shot at close range were found, that Ukraine was a “crime scene” and this was within ICC jurisdiction.

“We have to pierce the fog of war to get to the truth,” Khan said on Twitter.

The major of the northeastern city of Kharkiv, Ukraine’s second largest, said bombing had increased significantly on Wednesday and satellite photos from Maxar technology showed long columns of armoured vehicles in the region.

At least seven people were killed, including a two-year-old boy, and 22 wounded in Kharkiv over the past 24 hours and Ukrainian forces shot down two Russian planes attacking towns in the region, regional Governor Oleh Synehubov said earlier.