Russia warned the West on Wednesday it was working on a painful response to a fresh round of sanctions targeting its oil and gas sectors.

‘Russia’s reaction will be swift, thoughtful and sensitive for those it addresses,’ Dmitry Birichevsky, the director of the foreign ministry’s department for economic cooperation, was quoted as saying by the RIA news agency.

The announcement came after USA and UK leaders announced a ban on Russian oil while the EU is ending its reliance of Russian gas, pushing the economic response to Russia’s invasion of Ukraine even further.

European Commission President Ursula von der Leyen said Wednesday the bloc has bought enough liquefied natural gas to ensure its independent of Russian imports up until the end of the winter, less than two weeks away. 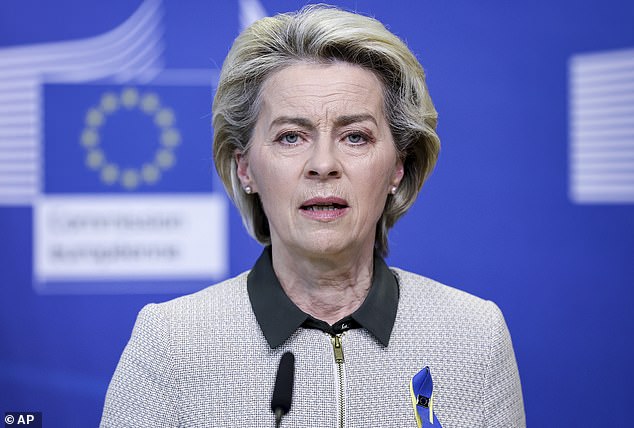 President of the European Commission Ursula von der Leyen said the EU is ending its reliance of Russian gas, but the bloc has only enough liquefied natural gas until the end of winter 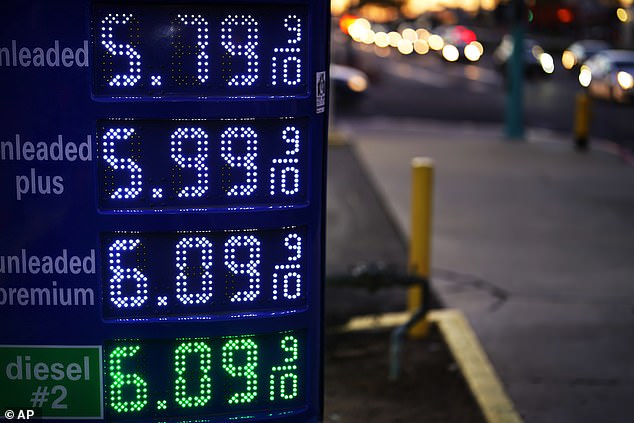 Gas prices are displayed at a gas station in San Diego, Tuesday, March 8, 2022. The average price for a gallon of gasoline in the US hit a record $4.17 on Tuesday as the ban was announced

Von der Leyen also told Germany’s ARD television that sanctions against Russia over its invasion of Ukraine were designed to cause maximum impact on Moscow, while causing the least damage possible to Western economies.

‘We simply cannot rely on a supplier who explicitly threatens us,’ said Von der Leyen in a written statement on Wednesday.

‘We need to act now to mitigate the impact of rising energy prices, diversify our gas supply for next winter and accelerate the clean energy transition.’

Under its new plan, called the ‘REPowerEU plan’, the EU will attempt to gradually remove 155 billion cubic meters of fossil gas – equivalent to Russia’s share of the European gas import market.

The bloc envisions ending almost two thirds of that amount by the end of 2022, which it says will end its dependence on a single supplier.

Relying more on non-Russian liquified natural gas suppliers, the Commission plans to fill up gas storage in the EU by at least 90% by October 1 in preparation for next winter.

The EU also said it is investigating ‘potential distortions of competition’, naming the state-owned Gazprom – Russia’s flagship energy firm and largest publicly listed gas company in the world – as a likely culprit. 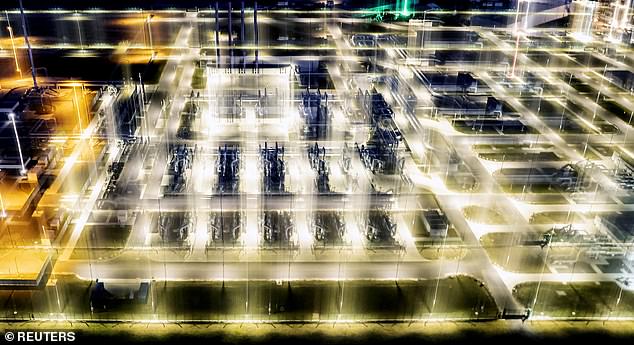 Pipes at the landfall facilities of the ‘Nord Stream 2’ pipeline are pictured in Lubmin, Germany

Germany announced it was scrapping the pipeline after Russia invaded Ukraine

As part of its transition away from Russian natural gas before 2030, the EU will pivot toward higher volumes of biomethane and renewable hydrogen production.

The EU imports 90% of its gas consumption, with Russia providing around 45% of those imports.

Russia also accounts for around 25% of oil imports and 45% of coal imports to the EU.

The EU also said it stands ready ‘to provide support to ensure reliable and sustainable energy,’ for Ukraine, Moldova and Georgia – keeping ex-Soviet states away from reliance on Russian oil and gas.

Germany has already announced it will scrap its ‘Nord Stream 2’ pipeline running from Russia to Germany through the Baltic sea, with German Chancellor Olaf Scholz suspending its certification.

The Swiss-based company which built the pipeline is considering filing for insolvency and has already let go most of its employees.

In comparison with the EU’s 25%, Russian oil imports account for 8% of total UK oil demand.

The UK gets less than 5% of its gas from Russia, but a decision from Putin to ban exports to Europe could still effect prices in the UK.

The majority of the UK’s oil imports come from the US, the Netherlands and the Gulf states.

‘The market has already begun to ostracize Russian oil, with nearly 70% of it currently unable to find a buyer,’ said UK Business and Energy Secretary Kwasi Kwarteng on Tuesday.

The press release arrived at the same time as an announcement from US President Joe Biden that the country will also swear-off Russian oil imports.

Only around 3% of US crude oil imports come from Russia, with the US relying on Canada for the majority of its oil imports.

Biden’s administration is releasing another 60 million barrels of oil from its Strategic Petroleum Reserve, adding to the 90 million already announced.

‘Oil and gas companies, and the finance firms that back them, should not use Putin’s war as an excuse for excess price increases or padding profits,’ said the Whitehouse in a statement on Tuesday.

‘The way to avoid high gas prices is to speed up – not slow down – our transition to a clean energy future,’ it later added.

‘The only way to eliminate Putin’s and every other producing country’s ability to use oil as an economic weapon, is to reduce our dependency on oil.’