Mother, 41, who sexually assaulted another woman while she was unconscious after smoking cannabis pipe ‘laced with Spice’ avoids jail

A mother who sexually assaulted another woman while she was passed out after being ‘spiked’ has kept her freedom.

Michelle Robson, 41, has been put on the the sex offenders register after she lowered the jeans of an unconscious victim and touched her.

The North Tyneside resident said that voices were ‘encouraging’ her to do so.

When the victim awoke during the act and asked what she was doing, Robson claimed she had been ‘confused’ and said she thought she had been touching her own partner, who was a man.

Newcastle Crown Court heard the victim had gone to a house to buy cannabis that day and was offered a ‘pipe’, which she accepted without realising it had been ‘laced with Spice’, which caused her to lose consciousness. 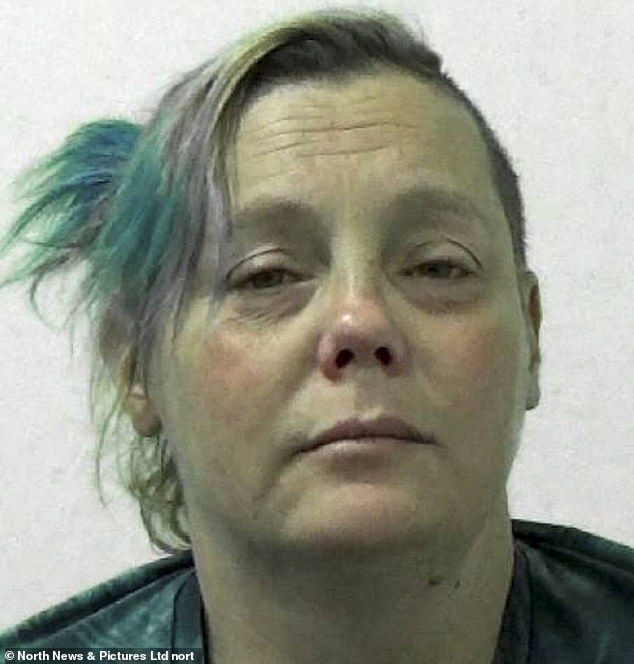 Michelle Robson (pictured), 41, from North Shields has kept her freedom after sexually assaulting another woman who had passed out after smoking cannabis pipe ‘laced with spice’

Synthetic marijuana, also known as K2, contains man-made chemicals that act on the same cell receptors in the brain as THC does in natural marijuana.

Researchers have found instances in which chemicals in synthetic marijuana can bind much more strongly to cell receptors than THC does in marijuana that is grown.

This can produce stronger effects, such as an elevated mood or feeling of relaxation.

But synthetic marijuana is also known to have psychotic effects on some users.

These can include extreme anxiety, confusion, paranoia and even hallucinations.

It is often packaged under names such as Spice, AK-47, Green Giant Scooby Snax, Smacked, iBlown and Dank.

Prosecutor Paul Cleasby told the court the victim woke to the feeling of hands touching her and thought it must have been her partner.

When she fully came round she quickly realised it was the defendant who was touching her.

Mr Cleasby said: ‘The complainant realised her jeans had been opened and lowered and recalled hearing voices encouraging the defendant to touch her.

Mr Cleasby added the victim was subjected to ‘additional humiliation’ because other people observed the sexual assault.

‘She was pretty vulnerable because she had been given drugs and was unconscious at the time,’ he said.

The court heard Robson was also under the influence of drugs at the time.

She did not hand over the laced pipe to the victim but was there when she took it.

Miss Recorder Geraldine Kelly said it was a ‘shameful’ offence.

She added: ‘It was carried out on a victim who was helpless at the time and vulnerable because of the state she was in.’

The judge said the victim must have felt ‘humiliated, degraded and frightened’.

But she added there was an ‘element of coercion’ and Robson was in an abusive relationship and vulnerable herself at the time.

The court heard Robson has made progress since the offence and hopes to achieve her HGV licence.

She was sentenced to a community order for three years with rehabilitation requirements and £87 costs.

She has to sign the sex offenders register for five years.