EXCLUSIVE: Mother-of-three dentist, 44, is locked up for three days with her four-year-old daughter in sweltering Dubai jail after drinking glass of wine on Emirates flight from Gatwick

A mother has told of her terrifying ordeal of being locked up in a filthy Dubai jail for three days with her four-year-old daughter for drinking a glass of wine on a flight from London.

Ellie Holman, 44, was arrested after being asked by an immigration official at Dubai International Airport if she had consumed alcohol on the eight-hour flight.

The mother-of-three, a dentist, from Sevenoaks, Kent, says she was held in a ‘baking hot and foul smelling’ airport detention centre – and not allowed to call her husband, Gary.

Now Dr Holman faces spending up to a year in the strict Arab state for her case to be settled.

Speaking exclusively to MailOnline, she said: ‘My little girl had to go to the toilet on the cell floor. I have never heard her cry in the same way as she did in that cell. 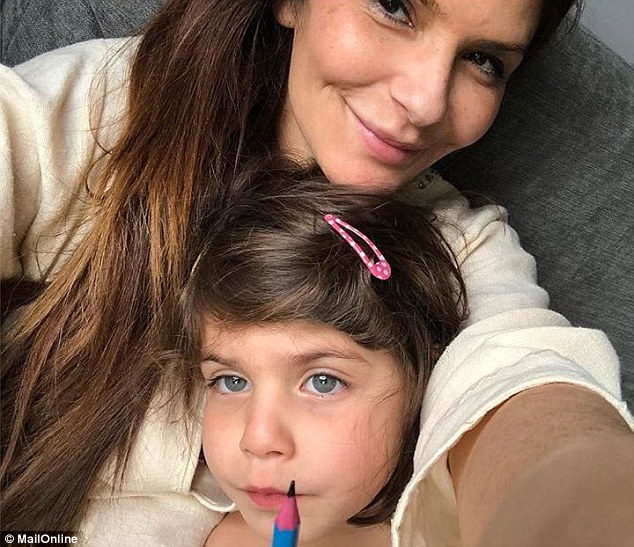 Dr Ellie Holman and her daughter Bibi, four, both pictured, were held in a Dubai jail cell for three days after she was arrested for drinking wine on an Emirates flight from the UK 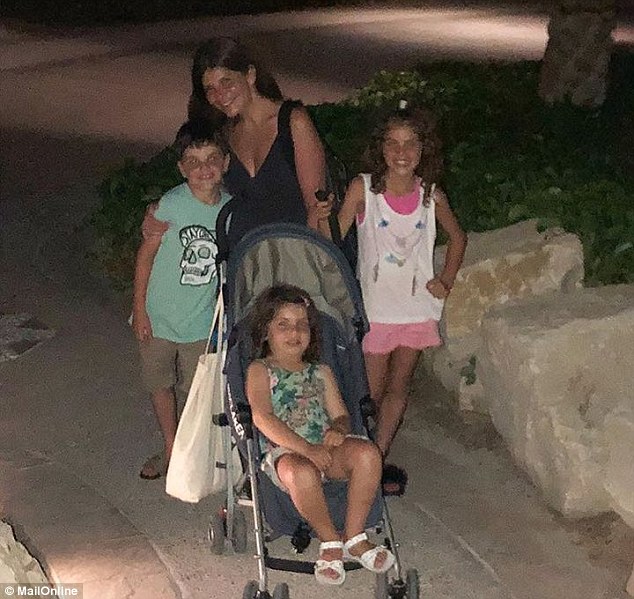 Dentist Dr Holman, pictured with children (from left) Noah, eight, Bibi, and Suri, nine, said her ordeal began when she was surrounded by armed police after trying to film her argument with an immigration official when he claimed her visa had expired 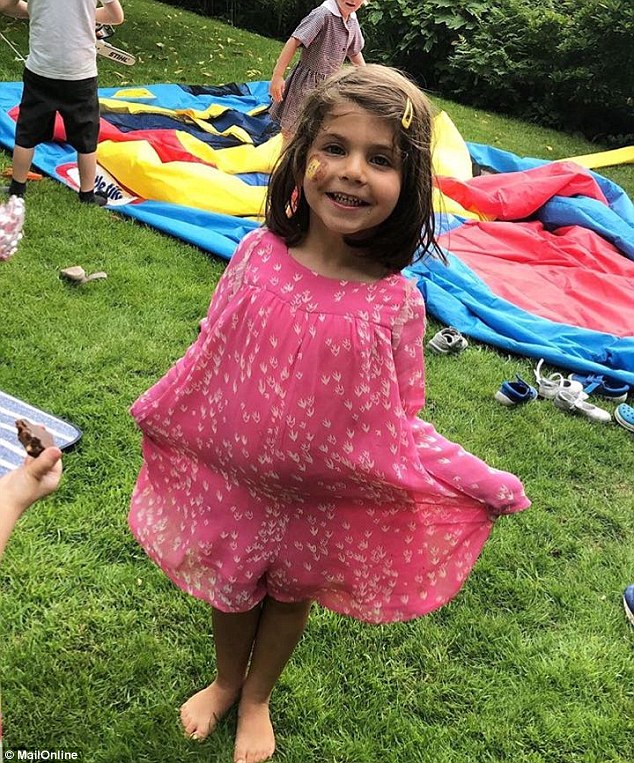 The mother of three said Bibi, pictured, was ‘terrified’ during the time in jail and was made to go to the toilet on the cell floor after being refused permission to use a lavatory

‘My passport remains confiscated until the case is settled, which I have been told will take at least a year,’ she said.

‘So far this situation has cost me around £30,000 in legal fees, expenses and missed work. My practice is closed. All our savings have gone.’

Her nightmare began after she stepped off an Emirates Airlines flight from London to Dubai on July 13th. During the flight she was served a glass of red wine with her meal. Alcohol is served as standard practice on Emirates Airlines on flights from the UK to Dubai.

On arrival Dr Holman was quizzed by an immigration official over her visa who told her it was not valid.

She said she had visited the UAE several times before and as the visa had not expired assumed it was still valid.

The immigration officer told her the visa was valid for a single visit and said she had to buy a ticket and return to London immediately.

Dr Holman says she pleaded with the ‘dismissive and rude’ official to allow her to apply for a new visa at the airport telling him her daughter was exhausted. 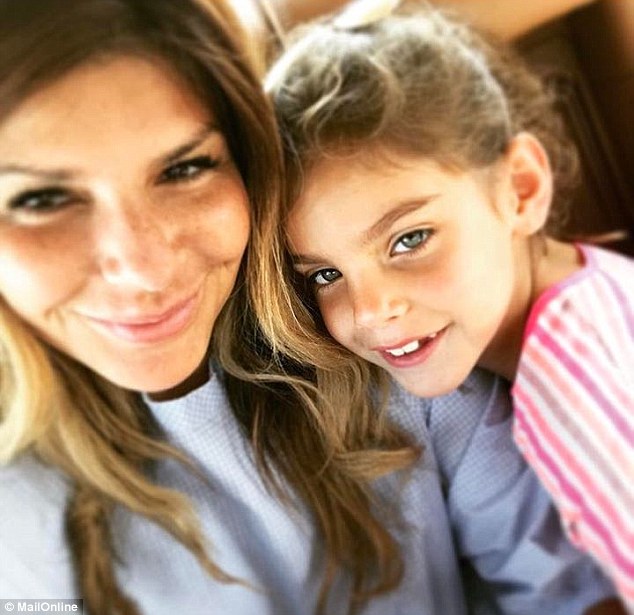 Dr Holman, pictured with Suri, has been told she may have to spend up to a year in the Arab state while the case is settled 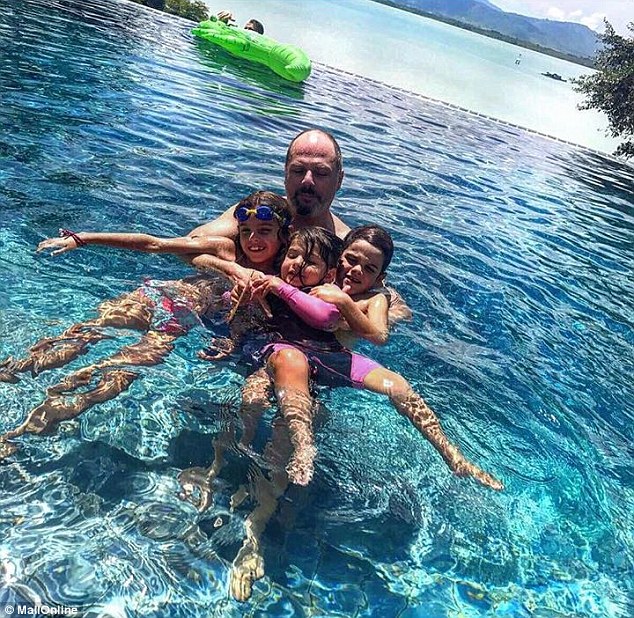 Her partner Gary, pictured with their children, flew out to Dubai to bring their daughter back to Kent but she has had her passport confiscated 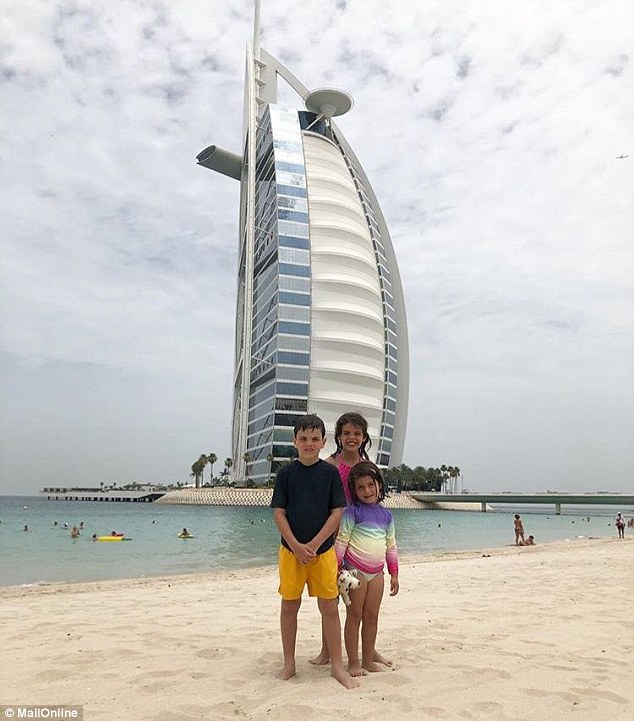 Mr Holman said the experience had been ‘devastating’ for her children, pictured, and said he hopes they are reunited with their mother soon

‘The thought of buying another ticket and turning straight around for another long flight was unthinkable,’ she said.

During a tense standoff with the immigration officer, Dr Holman said he became angry with her and refused to answer her questions. She said he then asked her if she had been drinking.

‘I told him I had a glass of wine on the flight. It was given to me free by Emirates Airlines staff.’

The official told Dr Holman possession of alcohol – even if consumed – was a crime in the UAE.

As the official became more agitated, Dr Holman started filming him on her mobile phone so that she had some evidence of his rude behaviour.

Within seconds she was surrounded by a dozen armed police and told filming airport officials was a criminal offence.

The terrified pair were led to a cell in the airport and had their phones and passports taken away.

Dr Holman said her daughter Bibi was inconsolable and she tried to comfort her by reading her books in the jail.

They were taken to a police station where she was told to provide a blood sample for an alcohol test, she said a guard took out her earrings and tried to rip off her hair extensions.

As police detention staff spoke in Arabic, Dr Holman pleaded for some water and food. She claims they also asked to use a toilet but were denied permission.

Dr Holman, a Swedish national, says she and Bibi were ordered to sleep in a canteen area used by other inmates. 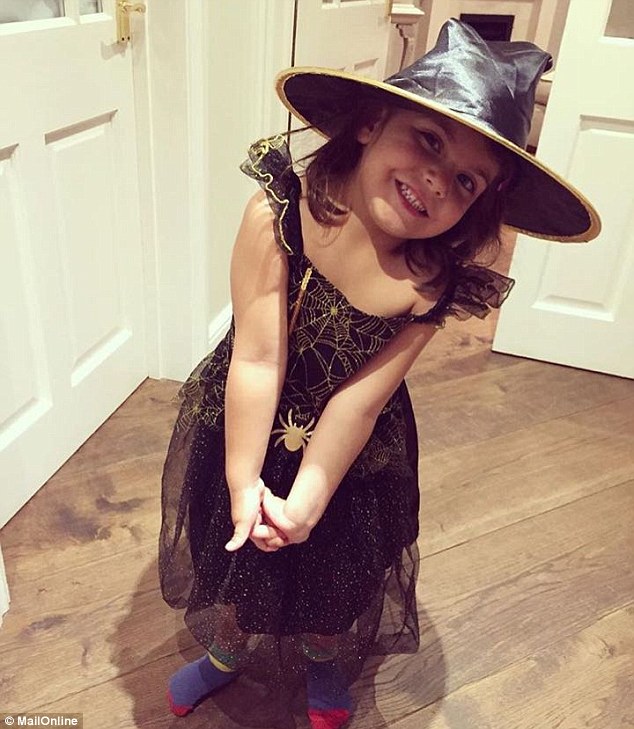 Dr Holman said her daughter Bibi, pictured, was inconsolable during the ordeal and she tried to comfort her by reading her books in the jail 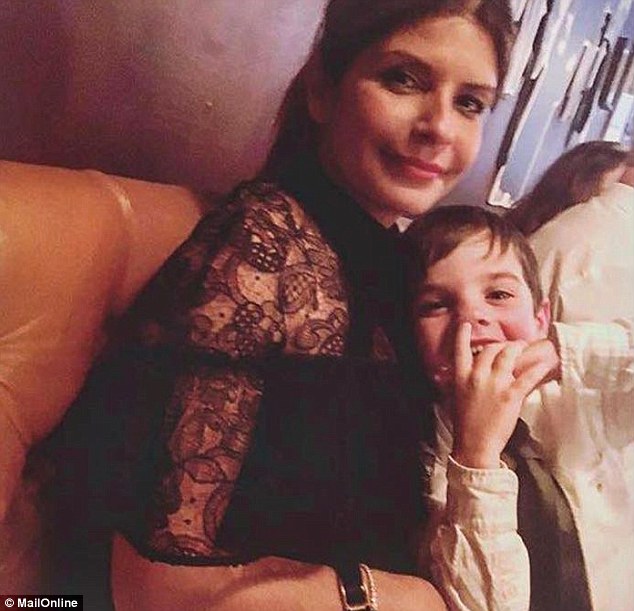 She claims the room’s lights were kept on and with no air conditioning she said it was ‘baking hot and foul smelling.’

She said the male guards offered no help as, exhausted and shocked by her experience, she struggled to lift the mattress. The guards stood by and laughed, she claimed.

‘My daughter is a happy, smiley girl, but she was terrified,’ she said.

The terrified pair arrived at a police building where she says a man in a dirty white lab coat said he was going to take a sample of her blood as evidence she had drunk alcohol.

She was told the results showed 0.04% of alcohol in her blood – a reading far below the UK drink drive limit.

During their detention the pair did not eat.

‘The food smelled like rotting garbage and neither Bibi or I could face trying it. I stayed awake for the whole three days,’ she said.

She claims they were also denied a pillow or a change of clothing and Dr Holman was forced to clean toilets and mop the floor while her daughter stood by her side.

She said Bibi was in a state of shock and refused to be comforted.

Back at their home in Kent, partner Gary was frantic with worry, as he had not heard from the pair.

Dr Holman said: ‘Friends had found out I was in jail and tried to visit. Nobody was allowed to see us. We were not told.’ 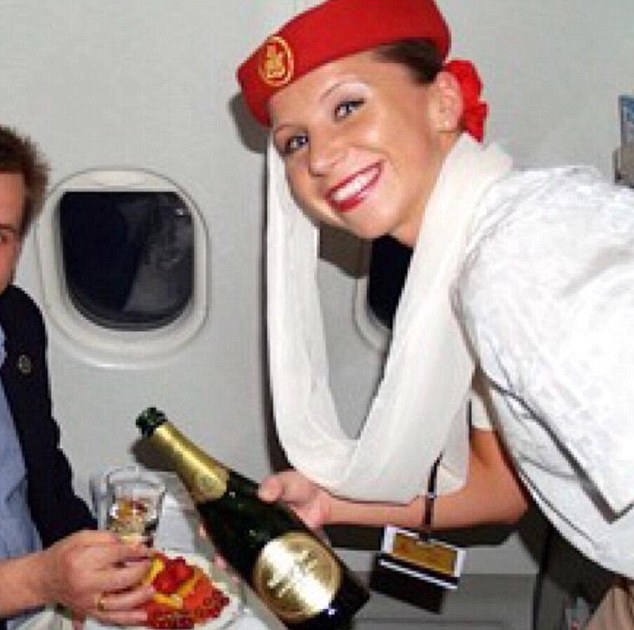 Following her detention Dr Holman was taken in handcuffs back to airport and given bail.

Bibi and her father have now been allowed to fly back to the UK while Dr Holman is staying with friends in Dubai.

Gary said the experience of seeing his partner and daughter jailed was ‘devastating for the whole family.’

‘The thought of Ellie and our little girl in that awful prison breaks my heart.

‘Ellie is a sensible, professional person and excellent mother who would never knowingly break the law.

‘Why do Emirates Airlines serve alcohol for a passenger to drink and then pass through the airport.

‘This has been devastating for the whole family. Ellie was taking a much needed break with little Bibi, who was looking forward to the beach and playing in the sea.

‘I hope this can all be over so we can all be together again and start to heal.’

Radha Stirling, CEO of Detained In Dubai, the British human rights NGO representing Ellie said in a statement: ‘The UAE maintains a deliberately misleading façade that alcohol consumption is perfectly legal for visitors.

‘This is exampled by bars at the airport, by hotels, restaurants and clubs serving drinks. Tourists cannot be blamed for believing that the Emirates are tolerant of Western drinking habits but this is far from reality.

‘It is wholly illegal for any tourist to have any level of alcohol in their blood. It is illegal to consume alcohol at a bar, a hotel and a restaurant and if breathalysed, that person will be jailed.

David Haigh, a partner at Detained in Dubai added: ‘It’s heartbreaking to see a mother and child arrested over something so trivial as a glass of wine.’