An orange, red and blue helmet for Charlie: Mourners pay their respects at funeral of ‘happy, enthusiastic’ boy, 9, killed after a scrambler bike crash… as priest warns of dangers of motorsports

Mourners pushed along a scrambler bike and held aloft an orange, red and blue helmet as they paid their respects to a nine-year-old-boy who died after a tragic head-on bike crash with another young boy in Northern Ireland.

Charlie Joyce was described as ‘happy and enthusiastic’ as a priest warned mourners about dangers of motorsports at his funeral today.

He was airlifted to hospital after the crash in Ballymena, Co Antrim on Thursday afternoon, June 16, but died in the early hours of Friday morning.

Another boy, aged 13, was taken to hospital after being critically injured in the incident. 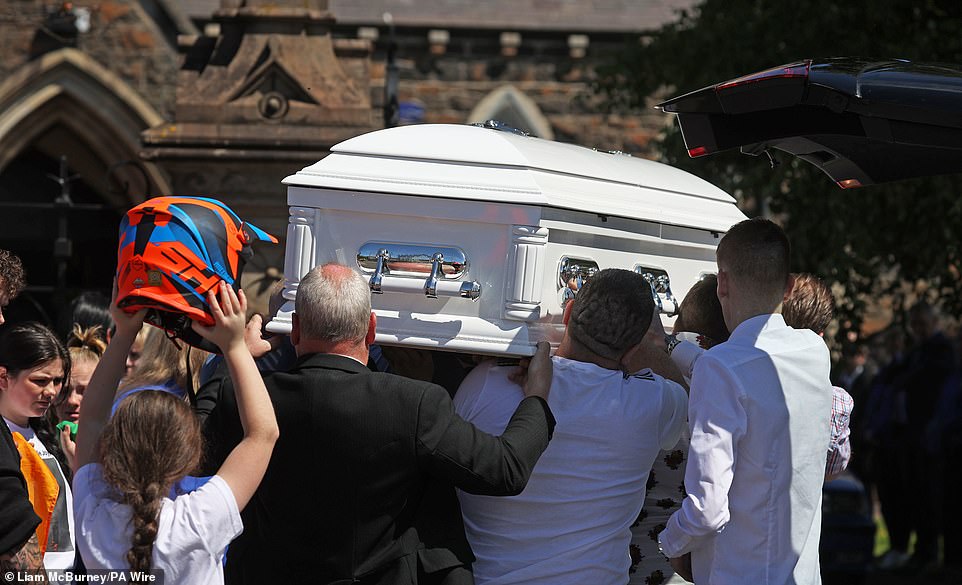 Charlie Joyce, nine, died after a head on scrambler bike crash on June 16, which left another boy, 13, in hospital in a critical condition. Mourners carried Charlie white coffin into All Saints Church in Ballymena, Co Antrim, while another followed holding aloft an orange, red and blue motorcycle helmet 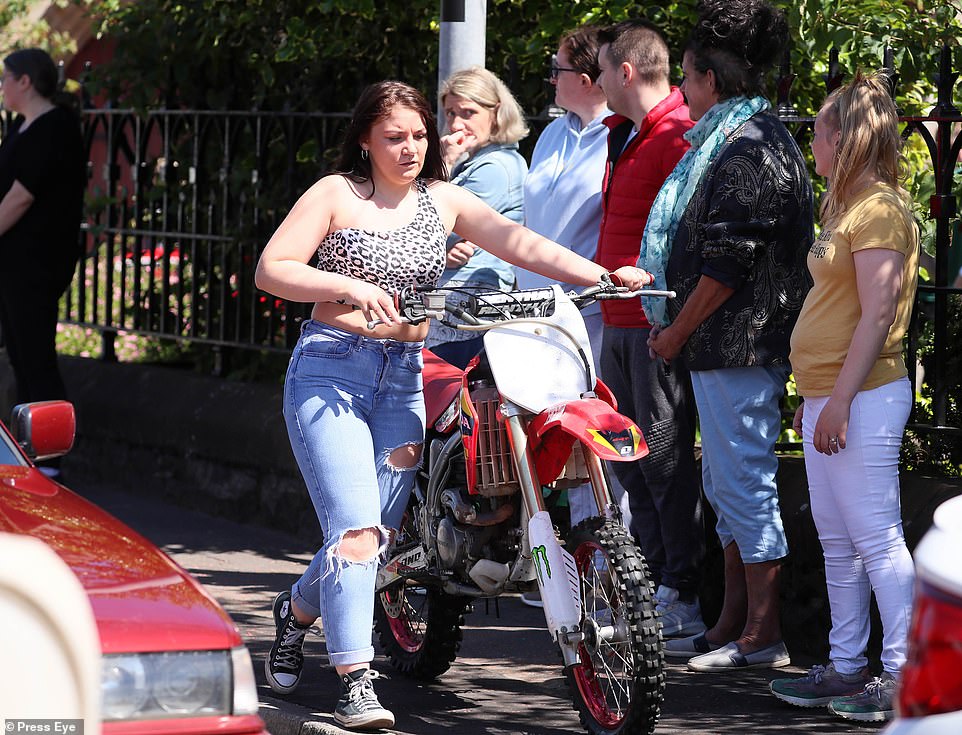 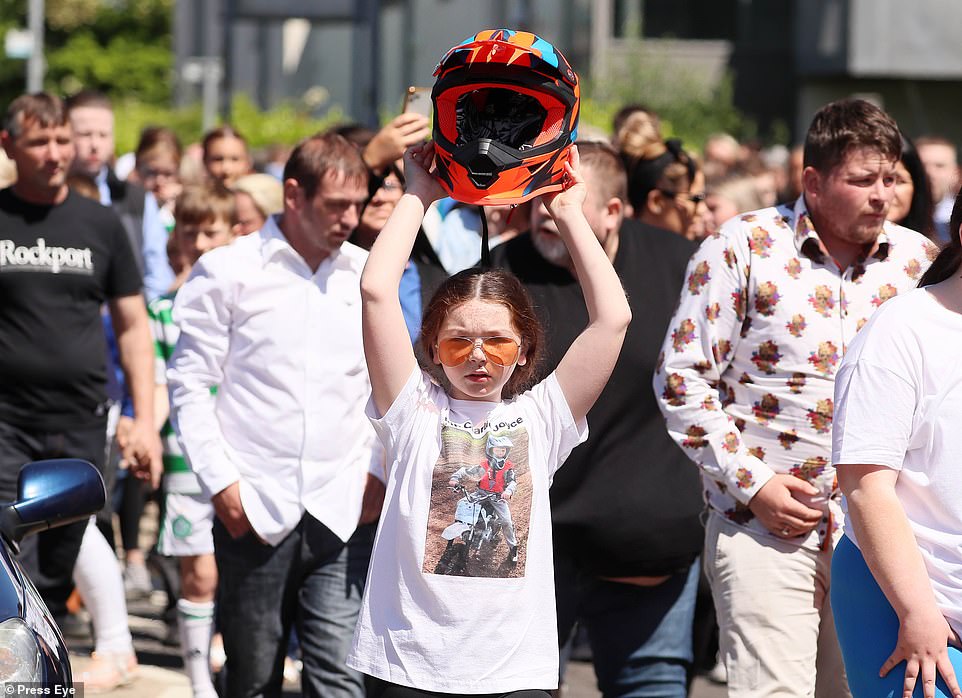 A young mourner holds aloft a bright, orange, red and blue motorcycle helmet in memory of Charlie Joyce at his funeral

At Charlie Joyce’s funeral today, his white coffin was carried into All Saints Church in Ballymena, Co Antrim, followed by a large crowd of family and friends.

One young mourner carried an orange, red and blue helmet while among the floral tributes on the back of a flatbed lorry was a framed picture of the young boy on a bike.

The procession was accompanied by a host of sports cars for the motorsport lover, from a beaten-up Vauxhall rally car to a classic supercar, the Ferrari Testarossa. 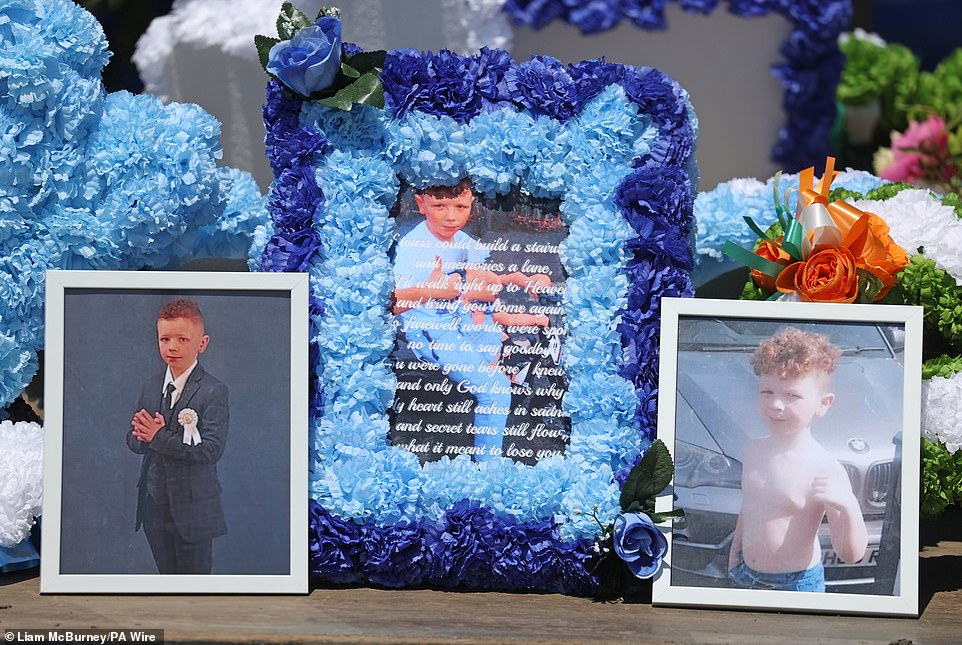 At his funeral today, June 20, Charlie Joyce was described by the priest leading the service as a ‘happy and enthusiastic’ boy who was ‘full of life’ and who had a ‘promising future’ ahead of him before the tragic collision cost him his life 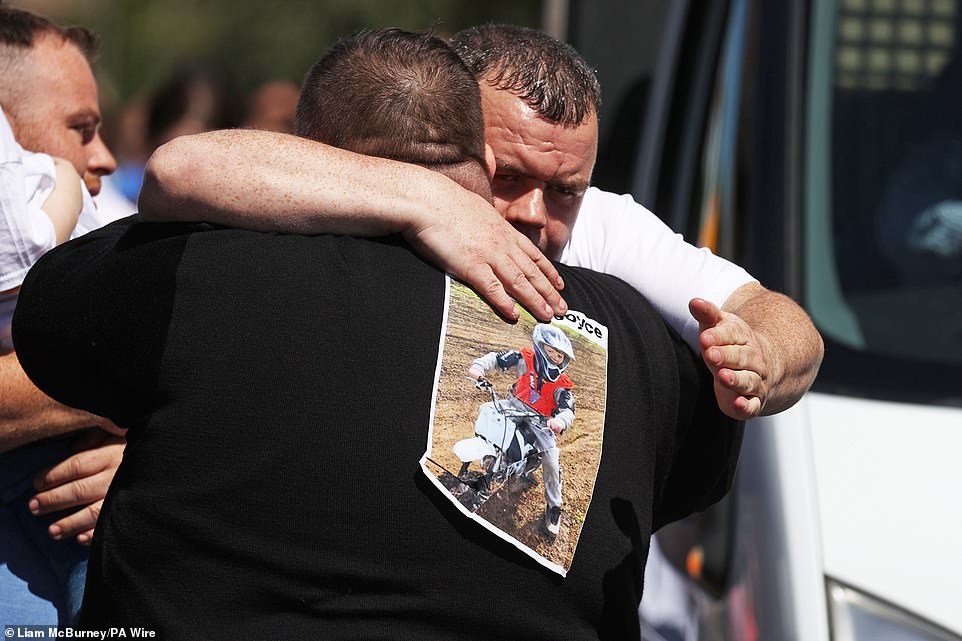 Pictured: Charlie Joyce’s father, Joe, (left) is consoled by a mourner outside the church ahead of the funeral this morning. A picture of Charlie on his scrambler bike wearing his protective gear is being held by the man consoling Charlie’s father 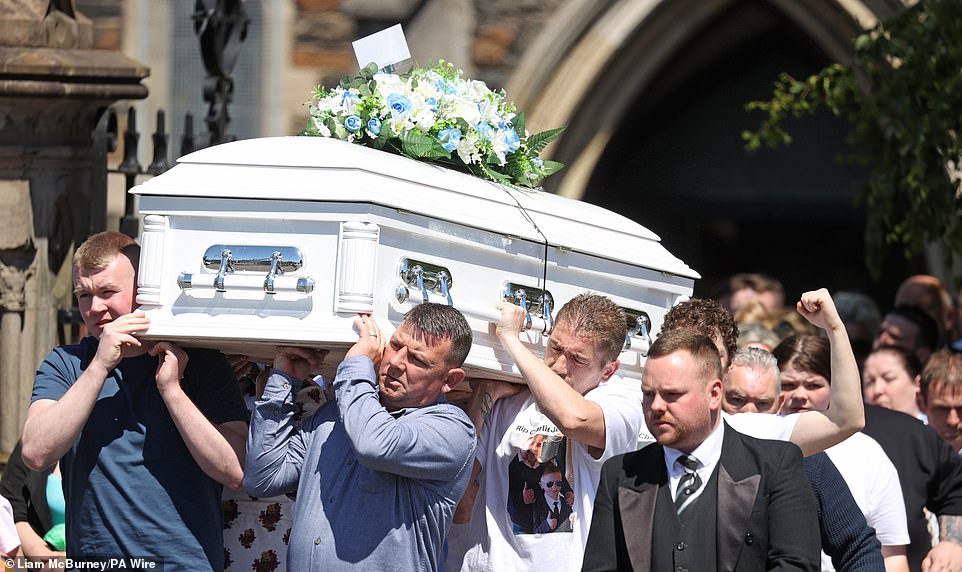 Charlie’s mother, Katie Marie, asked the priest if he would be afraid. Many mourners attended the funeral of the young boy who died after the tragic scrambler bike crash on Thursday

Charlie was fatally injured in the collision in a park in Ballymena late on Thursday afternoon.

Both children are understood to have been riding separate bikes that crashed head-on in the park in the Dunvale area of the town’s Dunclug estate shortly before 5pm.

They were taken to the Royal Victoria Hospital in Belfast, with Charlie being taken by air ambulance. 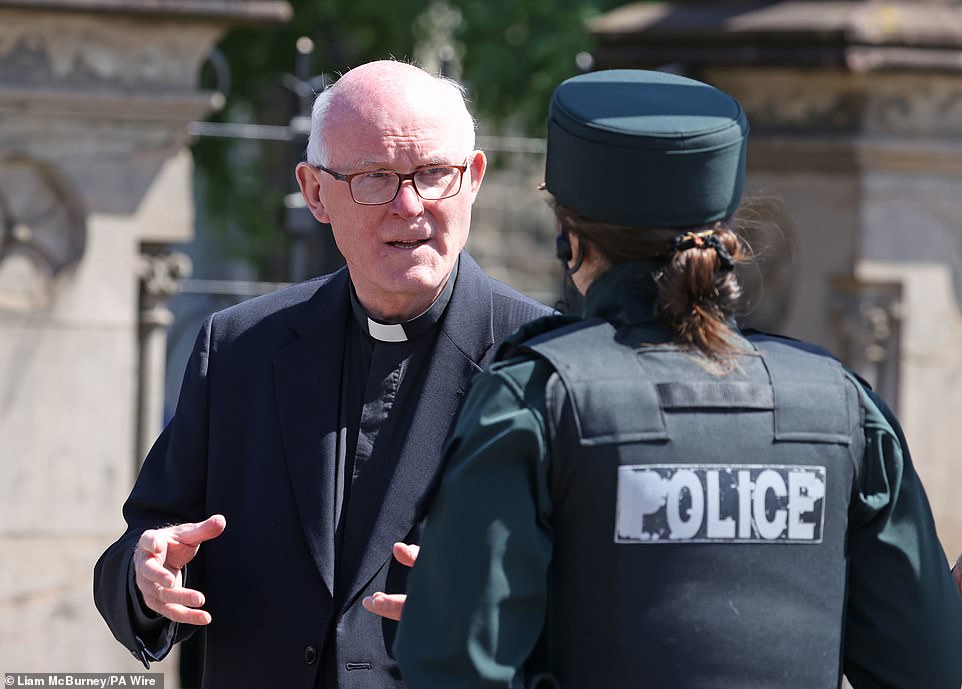 ‘It gets you in the pit of your stomach’: Parish priest of All Saints Church Monsignor told mourners that people will never die as long as they are remembered. ‘We are never going to forget Charlie,’ he added. He said that Charlie was a ‘happy and enthusiastic’ boy who was ‘full of life’ and was looking forward to a ‘promising future’ 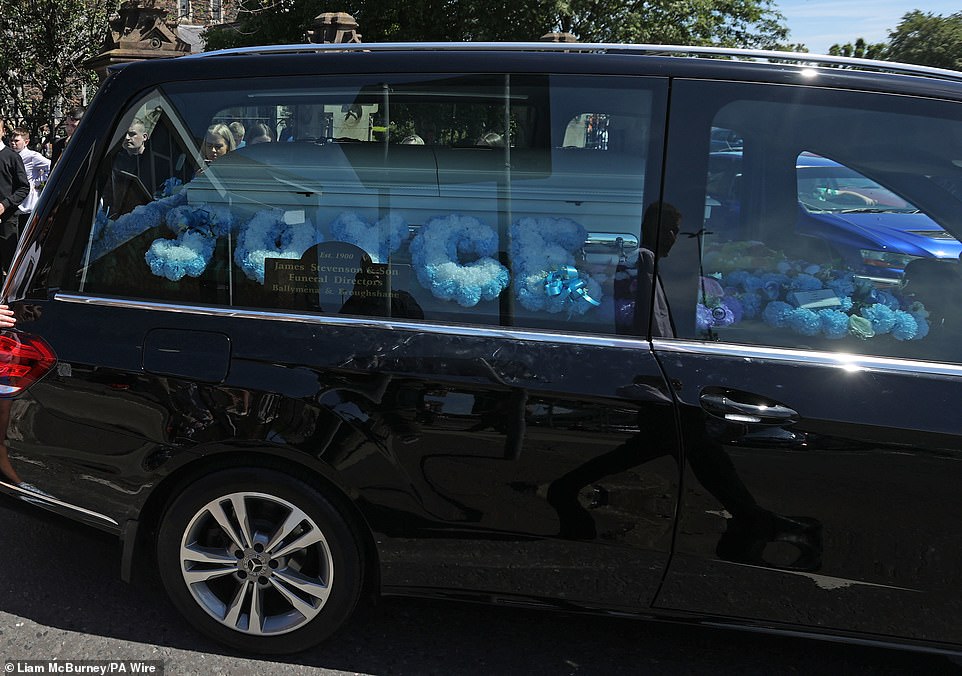 The hearse as it arrived at at All Saints Church today. The hearse contained a blue wreath shaped in Charlie’s surname, ‘Joyce’ 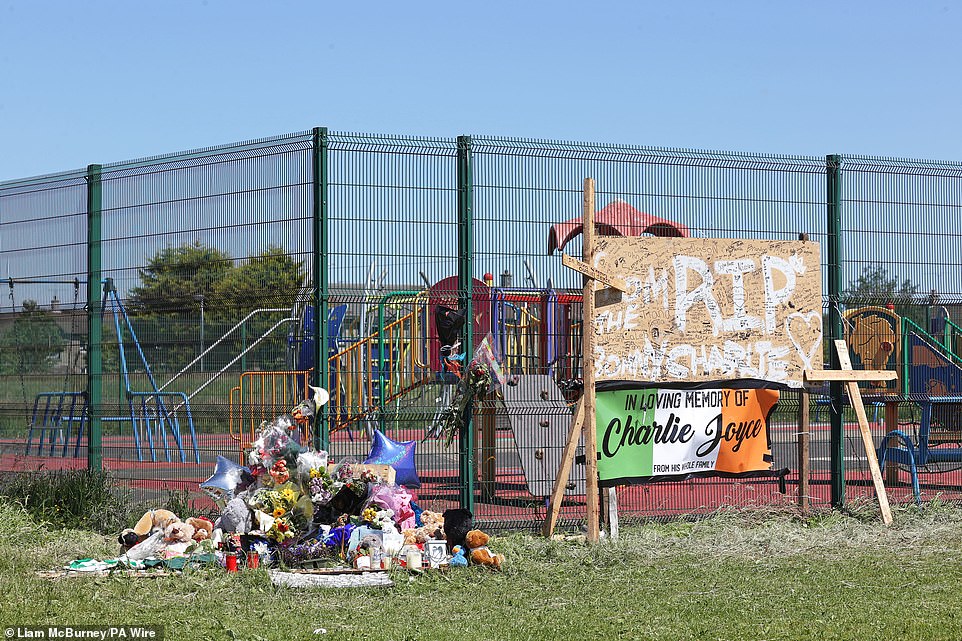 Parish priest of All Saints Church Monsignor Patrick Delargy said Charlie had been ‘a very active boy, as we all know’, adding that he was ‘full of life’.

He said it ‘hits your body’ and ‘gets you in the pit of your stomach’ when a family loses a young boy, according to the Belfast Telegraph.

He told mourners that people never die as long as we are remembered, adding: ‘We are never going to forgot Charlie.’

Fr Delargy said Charlie’s mother, Katie Marie, had asked him: ‘Do you think he will be afraid? I hope he is not fearful.’

He said Charlie loved animals, especially horses and dogs, and had been a member of All Saints boxing club since the age of three.

The priest said: ‘He’s remembered there as a very happy, enthusiastic boy. He was a good lad. He looked forward to a promising future.’

Fr Delargy told the congregation: ‘He also liked scrambling but we also know that motorbike racing is a dangerous sport.’ 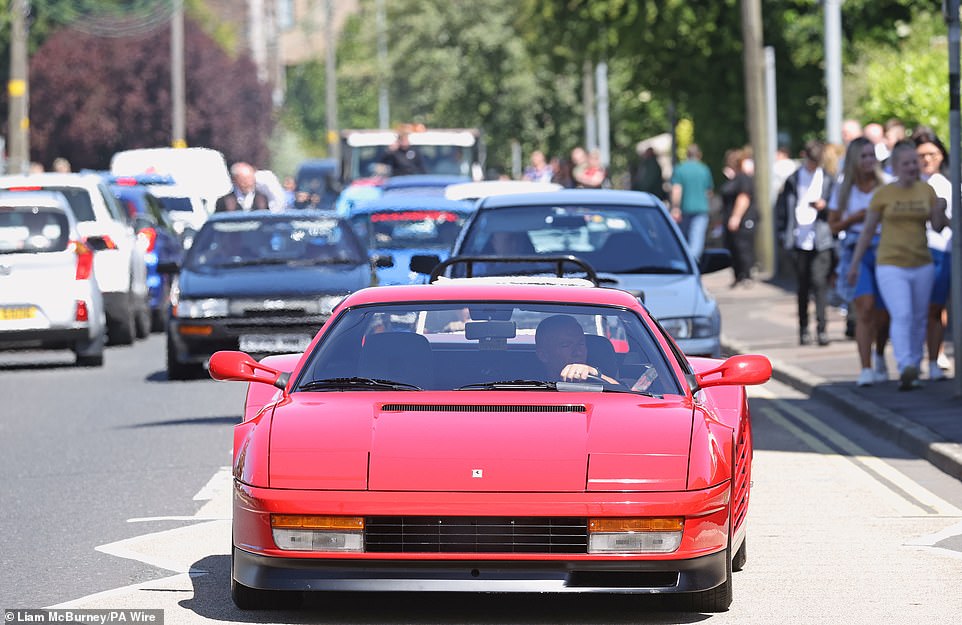 A procession of cars lead the funeral cortege including the classic supercar, a Ferrari Testarossa 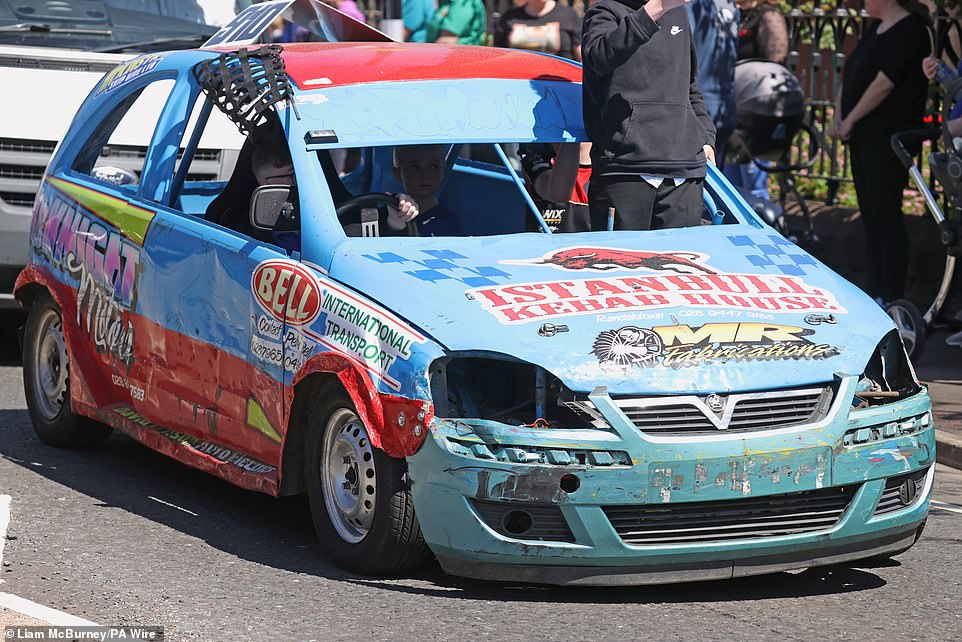 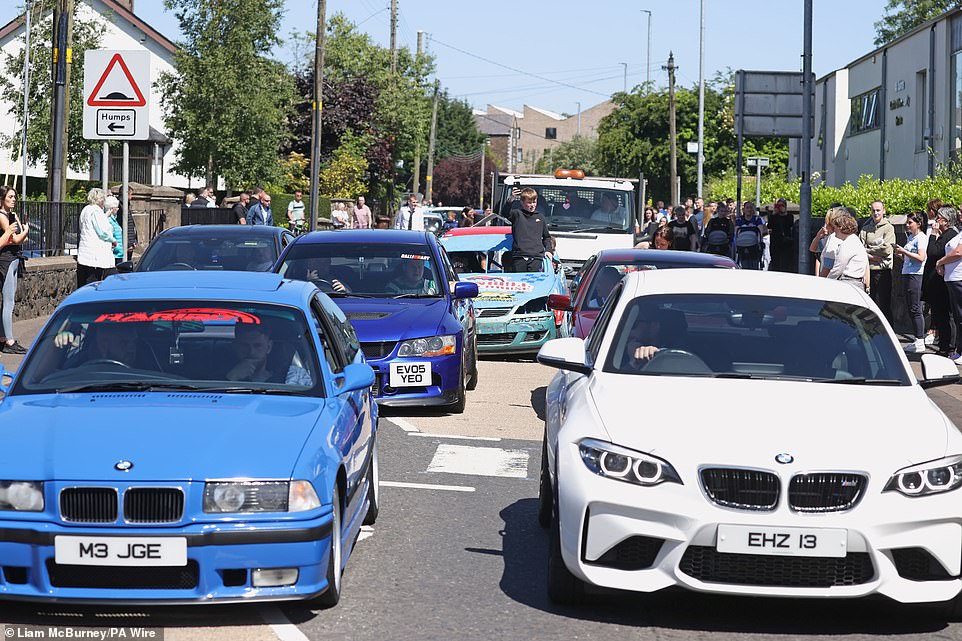 Sports cars including BMWs, a Vauxhall rally car and a classic Ferrari Testarossa led the funeral procession towards All Saints Church in Ballymena in tribute to the young boy who loved motorsports

He said that while it can be ‘exciting’ it is ‘also dangerous as well and sometimes we have to recognise that’.

He added: ‘We have to remember human life is very fragile, and all sorts of sports, there are all these rules to be kept. But sometimes things happen right out of the blue. And you don’t know how or why. And we’re left to recover from them. And that’s what we’re doing today.’

Fr Delargy said Charlie’s parents Joe and Katie-Marie, as well as his siblings and wider family circle, are ‘strong and brave’ and will be supported by friends in coming to terms with the ‘terrible blow’ of Charlie’s death.

The Police Service of Northern Ireland has appealed for anyone who witnessed the collision or who had mobile phone footage to contact officers.