A letter to NHS England chief executive Amanda Pritchard, signed by Tory MPs Alicia Kearns and Shaun Bailey, criticised the ‘disproportionate and unscientific reintroduction of inhumane restrictions’ by some trusts.

It comes as Sandwell and West Birmingham NHS Trust announced last week that partners would be banned from accompanying pregnant women to scans and appointments.

After MPs publicly complained about the changes, the trust reversed the decision but introduced a ban on visitors in maternity inpatient wards.

It refused to explain why the decision to ban partners at scans was taken in the first place. 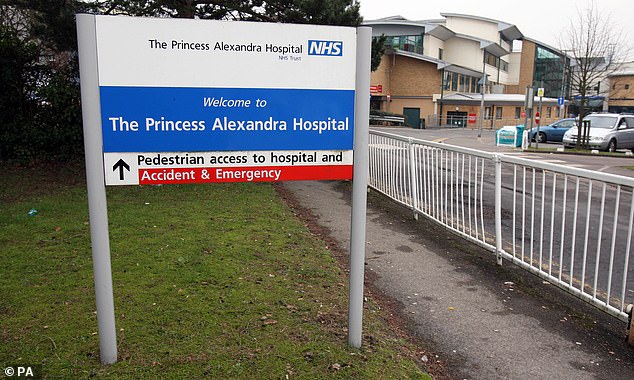 A week before, Princess Alexandra Hospital in Harlow, Essex, said women would have to attend antenatal appointments alone.

Support partners were also banned from its Maternal and Foetal Assessment Unit for women who are more than 22 weeks pregnant and have developed complications. It reversed the changes after being contacted by The Mail on Sunday.

The letter to Ms Pritchard, seen by this newspaper, says: ‘These restrictions appear to be reintroduced uncritically, with little or no accountability.’

The MPs called on NHS England to introduce a proactive ‘monitoring mechanism’ to ensure all NHS trusts followed the guidance and partners could support women throughout pregnancy and birth.

Mr Bailey, MP for West Bromwich West, described the Birmingham trust’s decision to ban partners as ‘disgraceful’ and said it was a ‘betrayal’ of women.

He told The Mail on Sunday: ‘It is proven that partners provide a vital lifeline and support framework for women during what can be one of the most vulnerable times of their lives.

‘Any decision to limit involvement of partners at any stage of pregnancy goes against advice from the profession, the Government and advocacy groups.’

Last spring, after The Mail on Sunday’s eight-month End The Trauma Of Lone Births campaign, all trusts scrapped restrictions for partners. A year ago official guidance made it clear that hospital trusts should find ‘creative solutions’ to ensure women had support at ‘all stages’ of pregnancy and labour.

Rutland and Melton MP Ms Kearns said: ‘Yet again we are seeing an unscientific, inhumane and dangerous assault by some NHS trusts on the rights of pregnant women for their partners to advocate for them.

‘There is no justification for these restrictions. NHS staff are vaccinated, families should be treated as one household and the testing scheme should be in full use. How have NHS bureaucrats not learnt any lessons?

‘I’m calling on Amanda Pritchard to grip this pandemic of arbitrary discrimination against families, and require NHS trusts to uphold national guidance.’

NHS England said national guidance had not changed’ and partners should be allowed access ‘during birth and for all maternity appointments’.