Not just any guidelines: M&S reveals post-lockdown stores and new rules for staff and customers ahead of reopening in two weeks – as data shows 31% rise in shoppers after yesterday’s lockdown easing

Marks & Spencer have revealed how their post-lockdown shops will look when they reopen – as it is revealed the number of shoppers out in UK high streets yesterday was 31 per cent higher than the previous Monday.

Retail analyst Springboard told MailOnline they recorded an increase of shoppers in UK high streets of nearly one third by 5pm on June 1, compared with the bank holiday Monday on May 25.

The data comes as pictures from inside M&S Hempstead Valley branch show staff wearing face shields, notices outside the changing rooms saying they have cancelled all bra fitting appointments and social distancing markers on the shop floor. 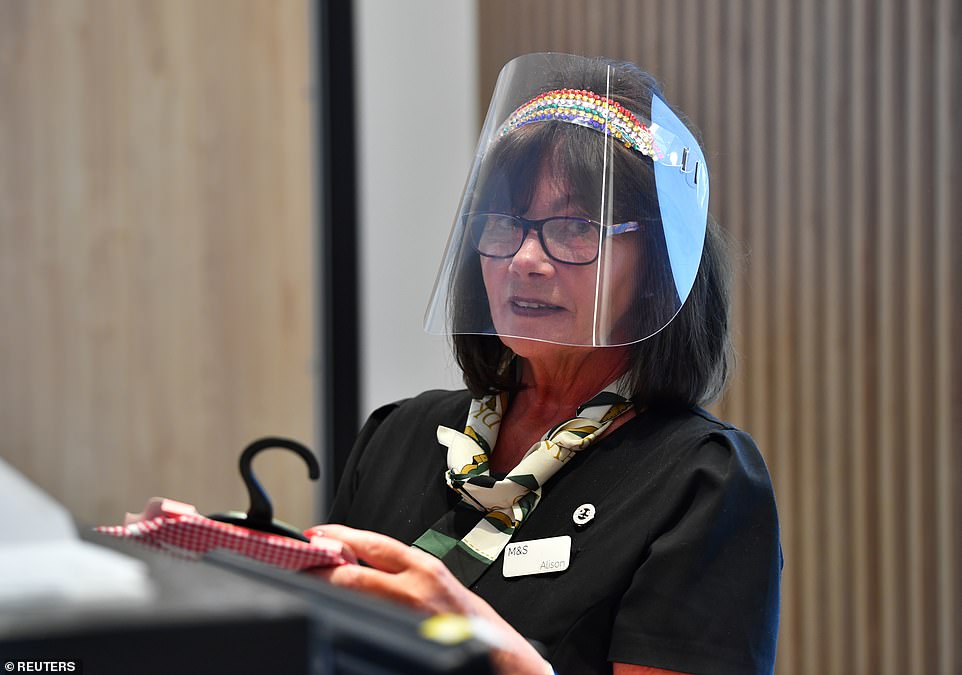 Alison Woolgar, customer assistant at Marks and Spencer, Hempstead Valley branch, wears a face shield as works at the soon to be opened clothes branch of the store in Gillingham, Britain, June 1 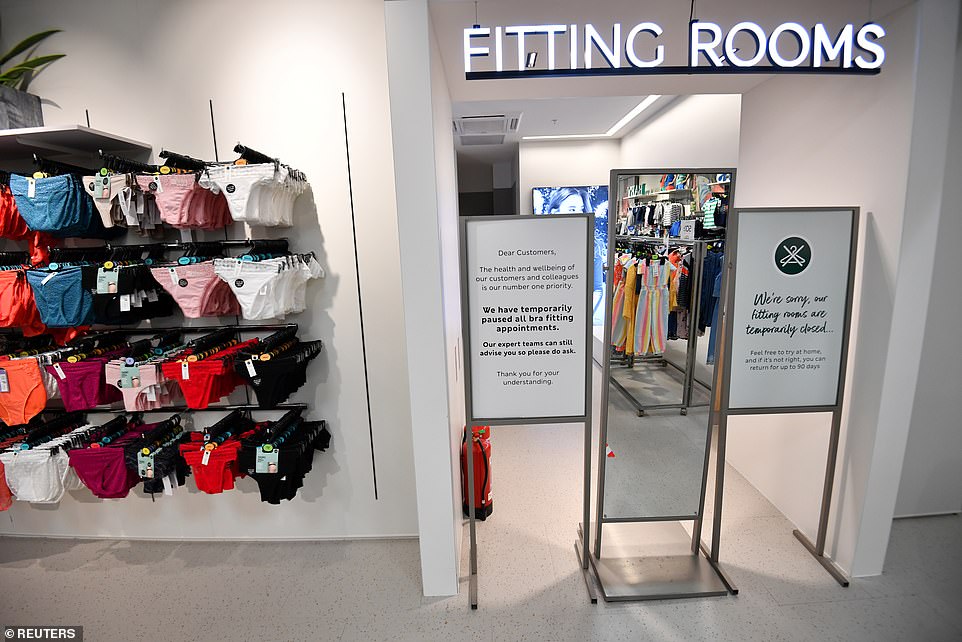 A notice saying that fitting rooms are closed is seen at Marks and Spencer, Hempstead Valley branch at the soon to be opened clothes branch of the store in Gillingham, June 1, 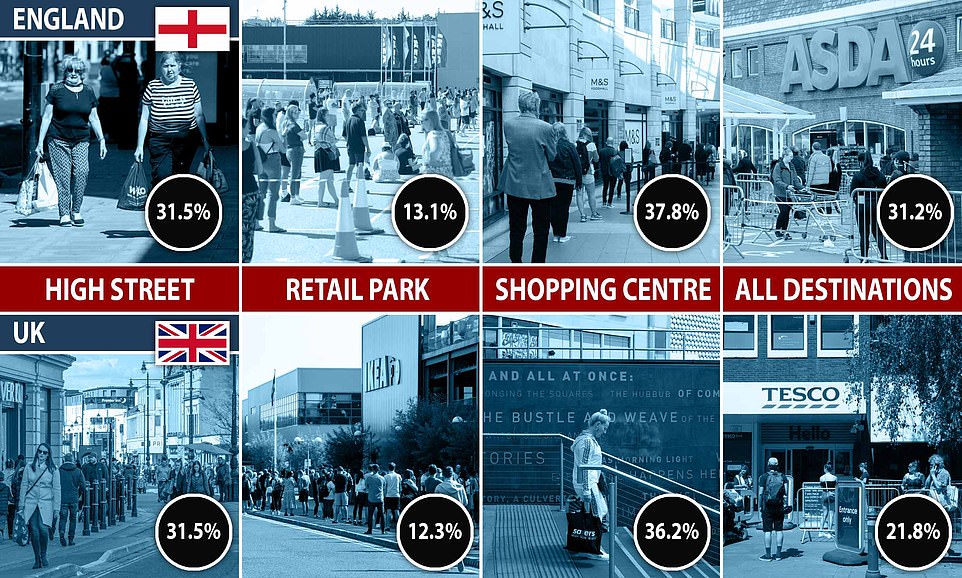 The number of shoppers out yesterday was 31 per cent higher than the previous Monday as lockdown was eased, new data shows 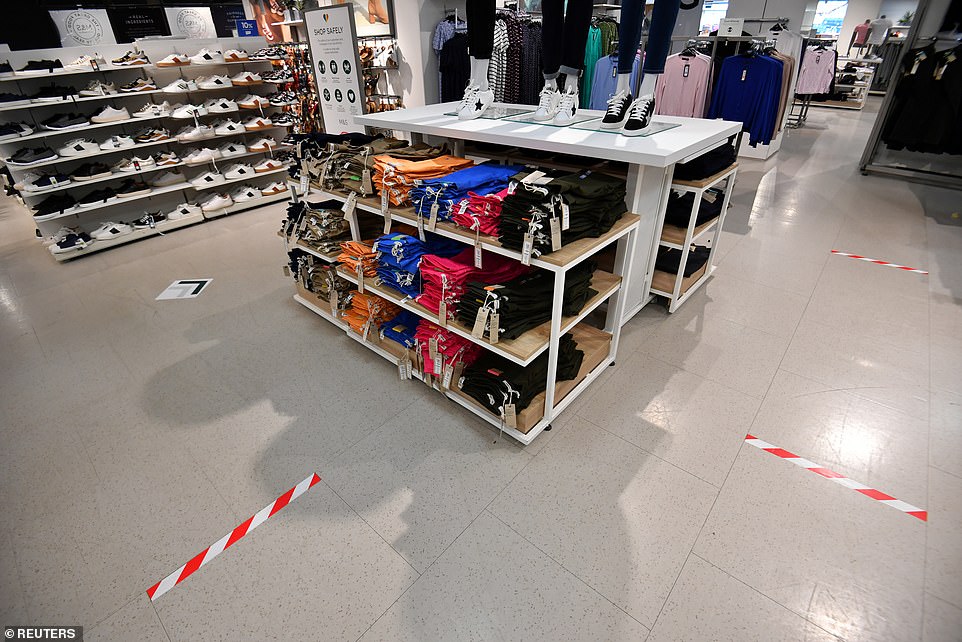 Social distancing markings are seen at Marks and Spencer, Hempstead Valley branch at the soon to be opened clothes branch of the store in Gillingham, Britain, June 1

Services that require close contact, such as clothes fittings, will not be available, and fitting rooms will stay shut, Drapers reported.

Cafes will stay closed, but some shops will offer coffee to take away.

Perspex screens will be installed by the tills and signs will encourage contactless payment.

Andrew Walmsley, M&S retail operations director, said: ‘Preparation is now well under way for the 15th – from the installation of perspex screens at tills, to putting in new signage. While shopping may feel different, there will still be the same great service and expert advice customers expect of M&S, as well as more digital solutions to supplement the in-store experience – such as our enhanced online bra-fit tool.’

The news comes as Henrietta Brealey, director of policy and strategic relationships at the Greater Birmingham Chamber of Commerce, stressed that there were still ‘plenty’ of businesses that are not yet able to operate, particularly those in the hospitality sector

Ms Brealey told BBC’s Radio 5’s Wake Up to Money her organisation was surveying for its quarterly business report survey, and an early look at results for around 600 businesses shows ‘really stark’ results across cash flow, business confidence, domestic sales, and export sales.

‘We’re seeing lower figures than we even saw at the height of the recession for business on the impact that they’ve had over the last quarter,’ she said.

‘It has been a real big sharp shock to the business community.’

Ms Brealey added that restaurants say putting in social distancing measures would mean they would only be able to serve roughly 20 per cent of the customers they normally would.

Additional Springboard data shows similar figures for England as for Britain as a whole. 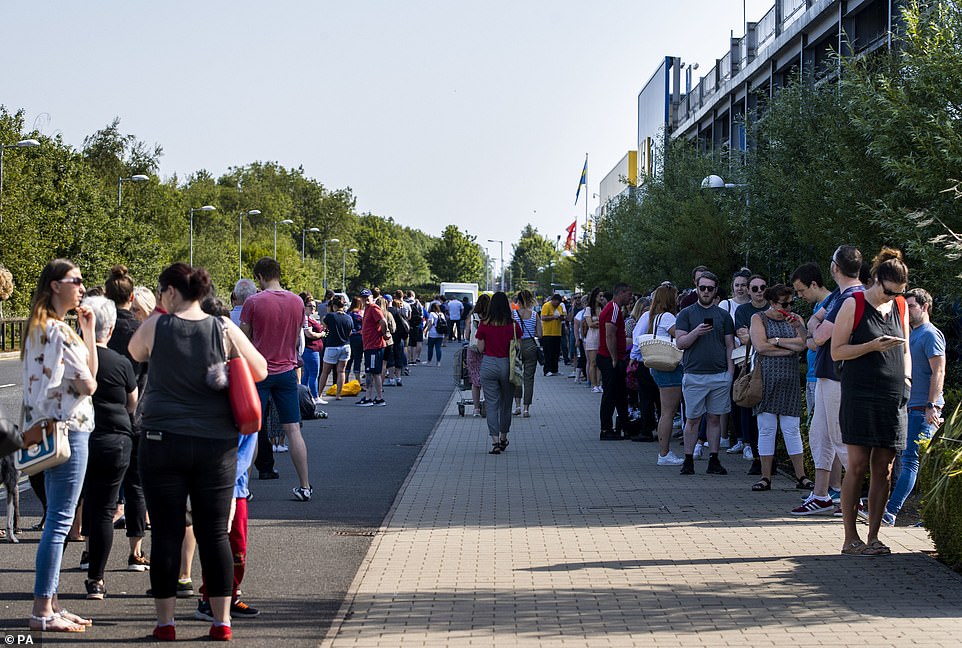 Retail analyst Springboard told MailOnline they recorded an increase of shoppers in UK high streets of nearly one third by 5pm yesterday, compared with the bank holiday Monday on May 25 (pictured: Ikea in Belfast, June 1)

For all UK shopping destinations, the increase was 31 per cent. For England, it was 28 per cent.

It comes as fashion retailer Reiss becomes the latest outlet to say it will reopen its first 26 UK stores on June 15.

The company said it is in the latest stage of its phased reopening plans, having already resumed trading in some stores in Europe.

It said it will implement a number of health and safety procedures to help comply with Government guidance, such as restricting the number of customers in stores and limiting access to fitting rooms.

Primark owner Associated British Foods (ABF) said it is working to reopen all its 153 stores in England on June 15, after the Government gave non-essential retailers the go-ahead to welcome customers again.

Sports Direct is expected to reopen from the same date, with House of Fraser doing the same shortly after.

But the president of the Association of Directors of Public Health said today that their experts are concerned ministers are lifting the coronavirus lockdown too quickly, saying the Government’s own five tests have not been met.

Fashion retailer Reiss said it will reopen its first 26 UK stores on June 15 after being given the go-ahead to swing open its doors again.

The fast-growing company said it is in the latest stage of its phased reopening plans, having already opened some stores in Europe.

It said it will implement a number of health and safety procedures to help comply with government guidance.

The high street chain said it will restrict the number of customers allowed in stores at any one time and will use clear social distancing markers.

It added that it will limit access to fitting rooms, encouraging customers to try products on at home, with it extending its returns policy to 60 days.

Reiss said it will also reduce its trading hours and provide staff with face masks and disposable gloves.

Christos Angelides, chief executive of Reiss, said the company has been ‘encouraged’ by its first openings in continental Europe and has seen a ‘very positive’ reaction to its new collection.

He said: ‘We have been working on a phased reopening plan for a number of weeks.

‘Reiss stores will be carefully managed, in accordance with the latest health and safety guidelines, to ensure the utmost wellbeing of our staff and customers.

‘We have transferred key learnings from our European teams and customers to ensure a safe, robust and enjoyable experience in the UK.’

The pandemic has dealt a heavy blow to high street retailers already under pressure, with Debenhams, Laura Ashley and Cath Kidston all sliding into administration since the virus hit the UK.