The Duchess of Cambridge toured a research centre at Imperial College London, and met parents who have suffered miscarriages. 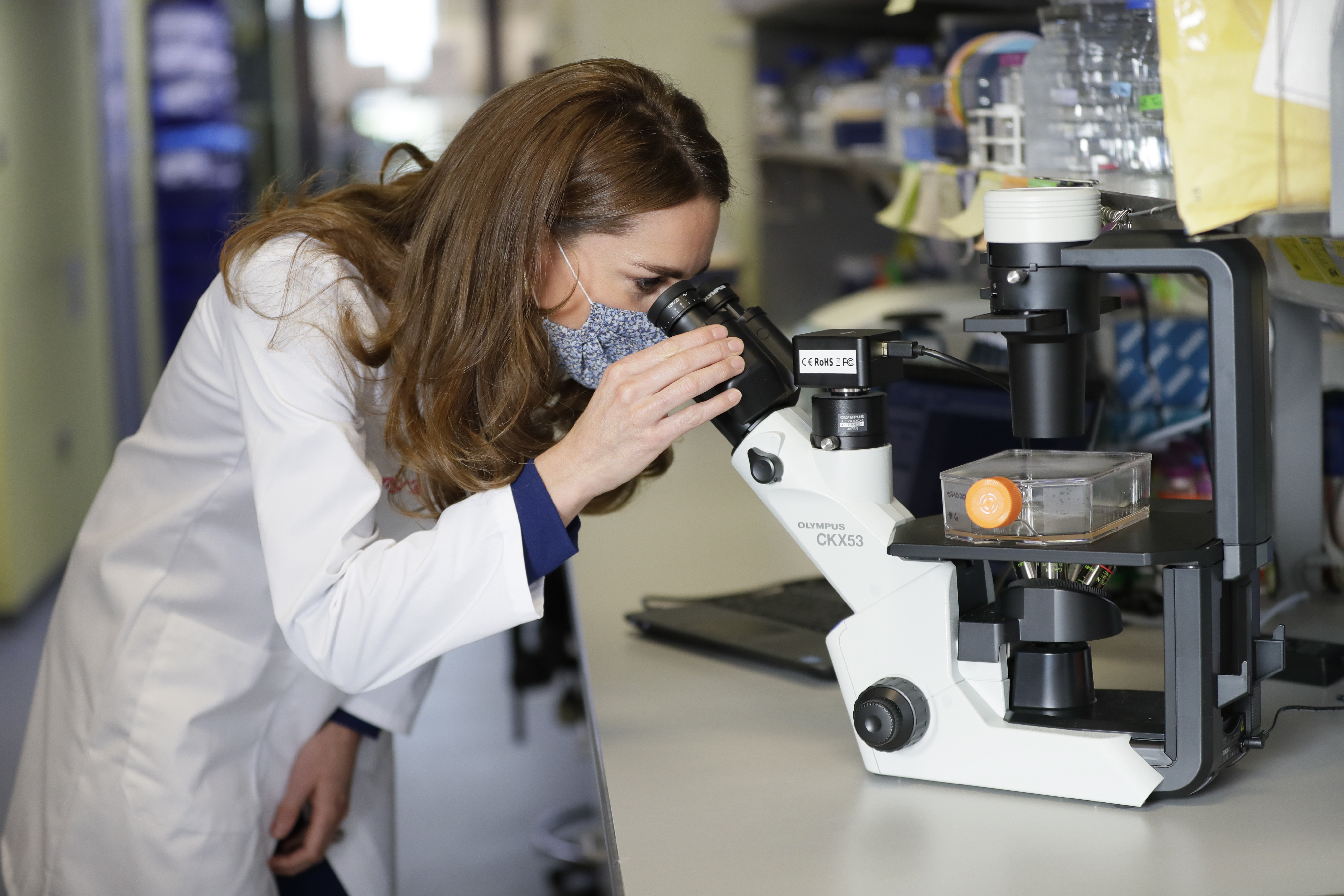 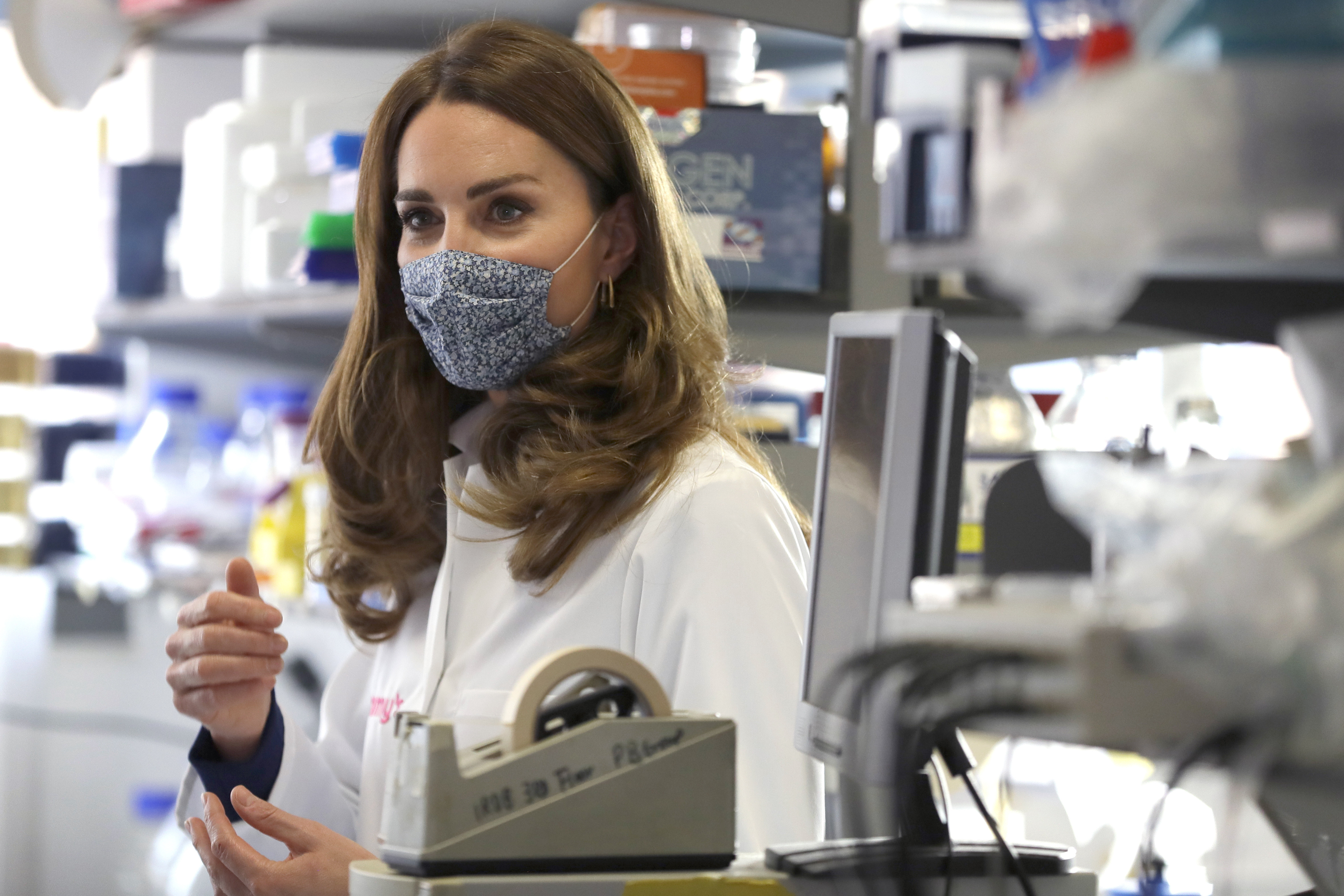 She heard about the work national charity Tommy's are doing to reduce to rates of miscarriage, stillbirth and premature birth.

Mum Kate, 38, spoke with Obiele and Nii-Addy Laryea who lost two babies in pregnancy before coming to a Tommy's clinic in London.

Wearing a mask she heard how the team performed a cervical stitch operation that kept their now two-year-old son Tetteh-Kwei safe in the womb until he was old enough to survive.

The Duchess also met Sarah and Adam Carrick who had their first son Brodie in 2015, but then experienced four miscarriages in quick succession.

They were referred to Tommy's and welcomed Ari last year.

In the UK, it is estimated that 1 in 4 pregnancies end in loss during pregnancy or birth.

Baby Loss Awareness Week aims to provide connection, recognition and commemoration for bereaved parents, in addition to increasing a national understanding of the impact of pregnancy and baby loss. 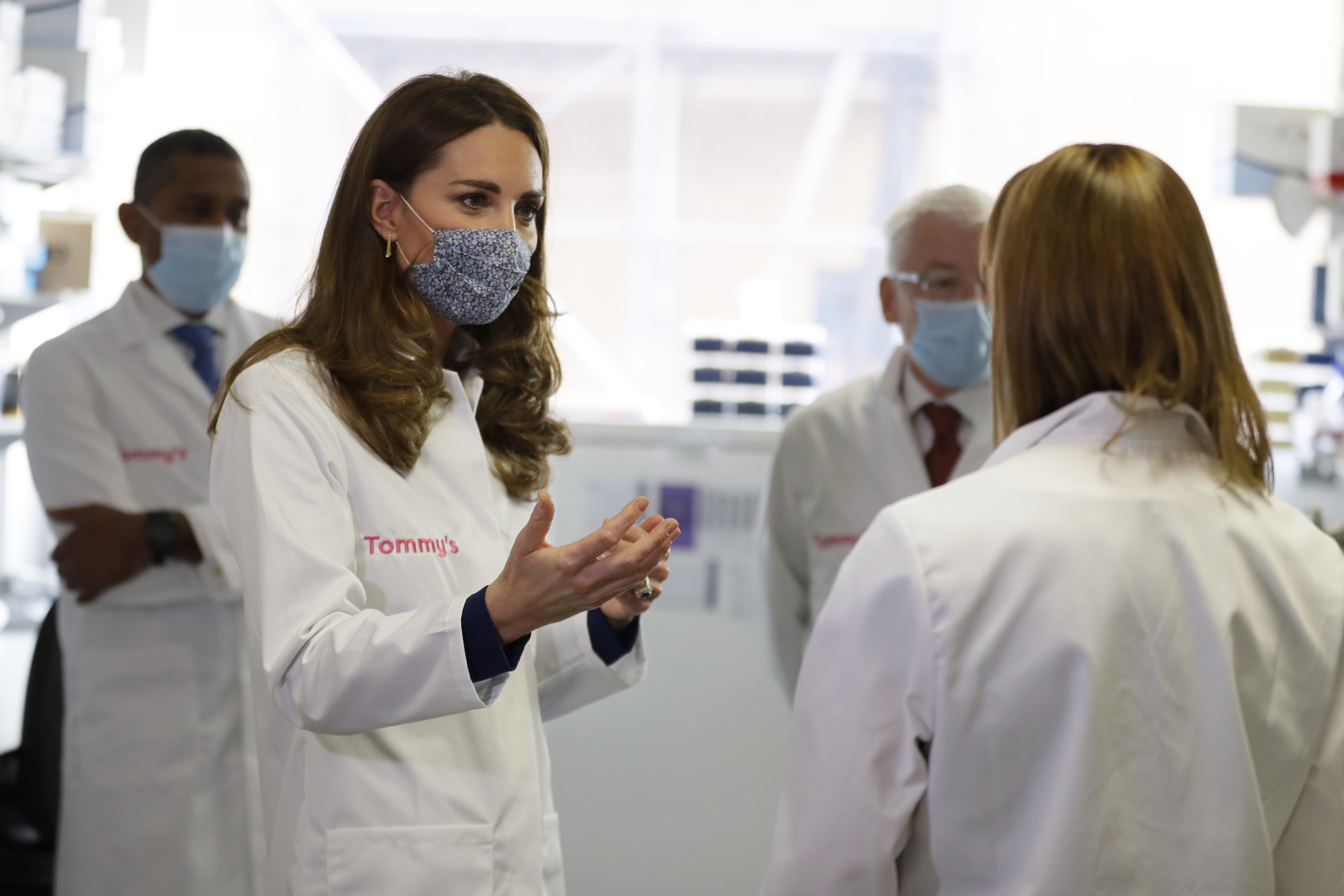 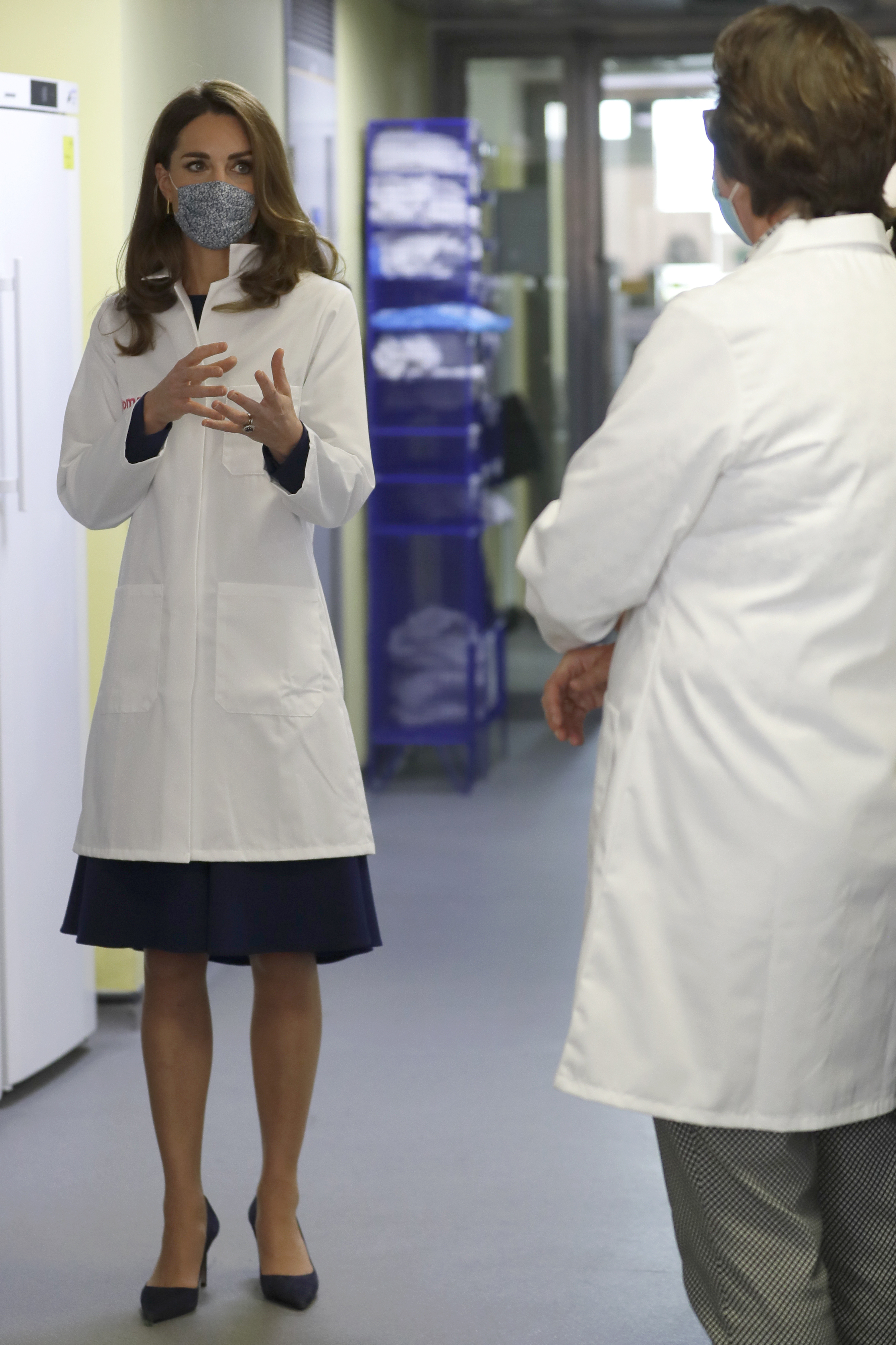 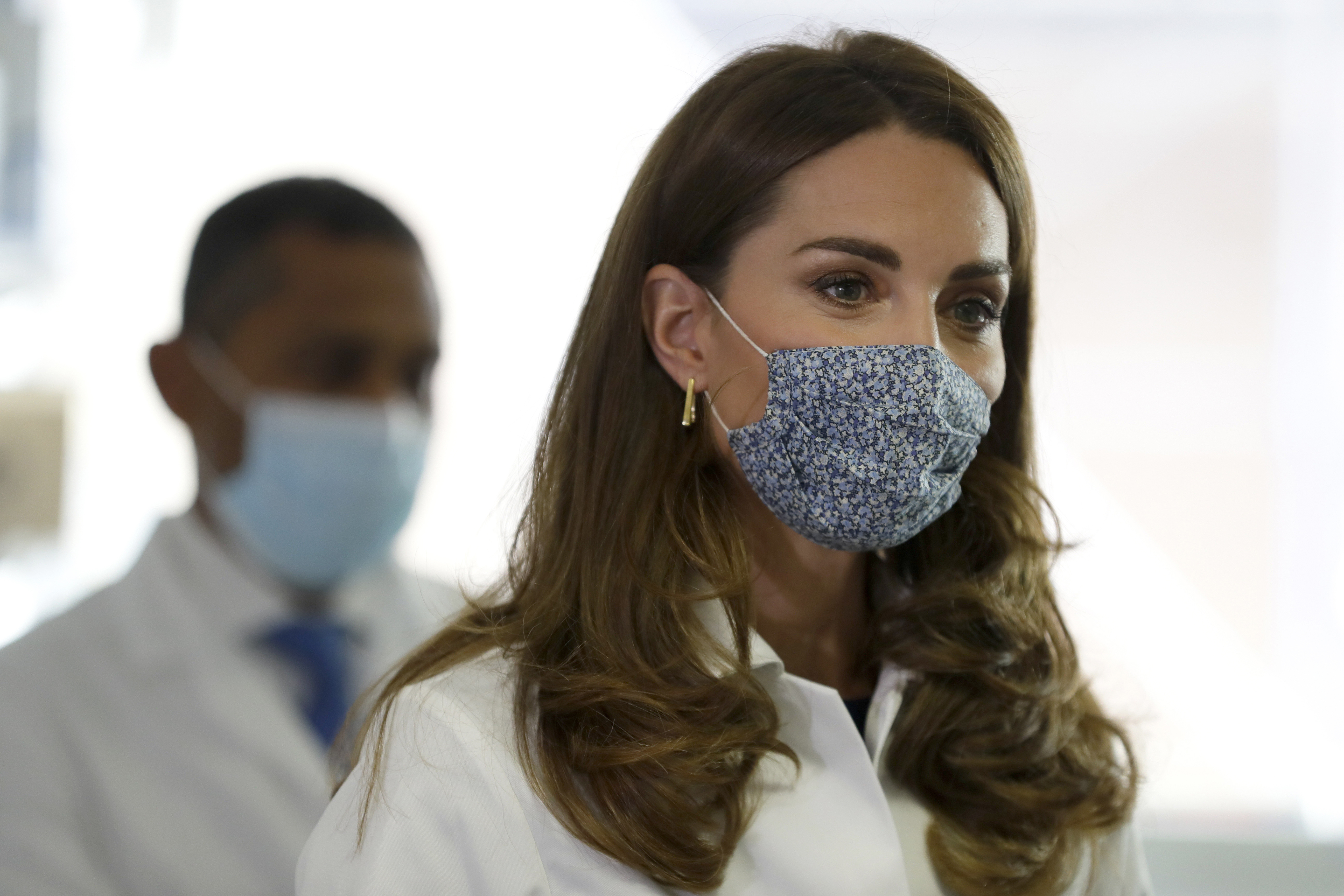 Tommy’s funds pioneering medical research to discover the causes of baby loss and helps women at every stage of their pregnancy journey, supporting them and their partners with expert information and care.

Her Royal Highness visited the Institute of Reproductive and DevelopmentBiology at Imperial College London, part of Tommy’s National Centre for Miscarriage Research.

Kate, mother to Prince George, Princess Charlotte and Prince Louis, is patron of The Royal College of Obstetricians and Gynaecologists.

She shadowed midwives and consultants at Kingston Hospital's maternity unit in south-west London in 2019.

Today the duchess heard from Shema Tariq who lost her first son Altair due to a rare placenta condition.

Following ground-breaking treatment from Tommy's in Manchester, she welcomed second son Faris in December 2018 and daughter Lyra in April this year.

One in four women experience miscarriage at least once in their reproductive lifetime, and most never find out why because healthcare professionals often simply don't know; this can and must change.

The Duchess of Cambridge was also told how the teams are working to understand the science behind baby loss in order to prevent it.

Kate learned about the Covid-19 trials under way which are designed to better understand the risks of the virus to pregnant women and their babies.

The duchess was presented with a special Tommy's candle, designed by Plum & Ashby, to allow her to take part in the global Wave of Light event to mark the end of Baby Loss Awareness Week at 7pm on Thursday.

Candles will be lit across the world to remember all babies lost, and people can join in by sharing their candle on social media using #WaveOfLight.

Baby Loss Awareness Week is now in its 18th year and focuses on offering bereaved parents the chance to commemorate their babies' lives, as well as raising awareness in the UK.

Professor Phillip Bennett, director of the Institute and Tommy's National Centre for Miscarriage Research at Imperial, said afterwards: "One in four women experience miscarriage at least once in their reproductive lifetime, and most never find out why because healthcare professionals often simply don't know; this can and must change.

"By finding the root causes of miscarriage, we can take steps to stop it from happening.

"For example, we know that around half of all early miscarriages are not due to genetic abnormalities, so there must be underlying causes that we can treat."

Tommy's is the largest charity funding research into the causes of baby loss, and its national research centre, a collaboration between three universities, is the biggest of its kind in Europe.

Around 24,000 women a year access treatment, support and have the opportunity to participate in research trials at the centre's clinics. 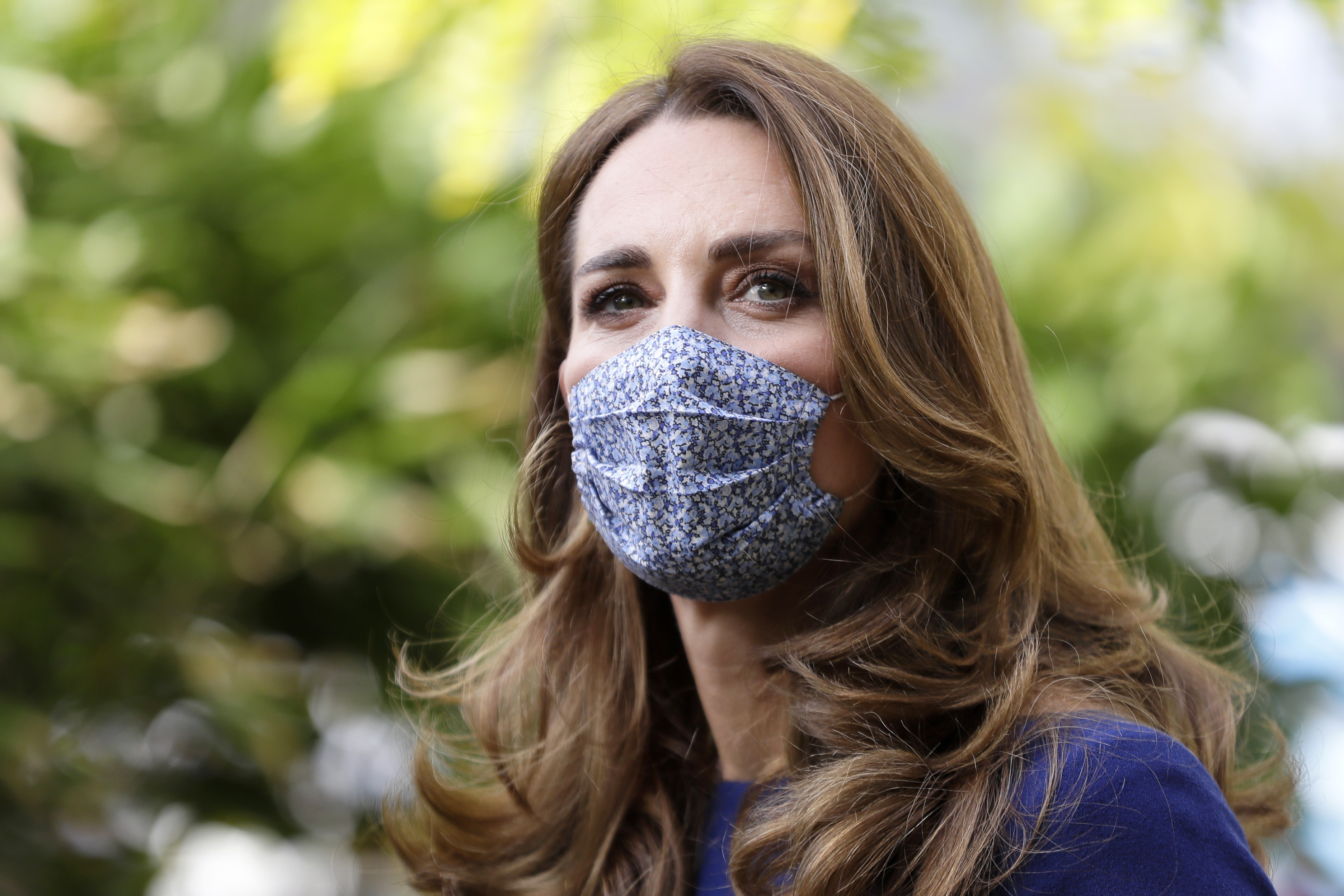