Muslims will need to be vaccinated against Covid-19 to perform the Hajj pilgrimage, Saudi Arabia declares

Saudi Arabia has announced that Muslims who want to perform the annual Hajj pilgrimage this year will need to prove that they’ve been vaccinated against Covid-19.

The kingdom’s health ministry said it will consider a vaccination as ‘the main condition for participation’ in the pilgrimage to Mecca, which all Muslims who are physically and financially able to are obliged to make once in their lives.

Health Minister Tawfiq Al Rabiah said in a statement on Tuesday that ‘compulsory vaccination’ would be required for all pilgrims.

The statement from the ministry did not specify whether the Hajj, which traditionally draws more than two million Muslims from across the world, would again exclude pilgrims from outside Saudi Arabia in a bid to curb the spread of the virus. 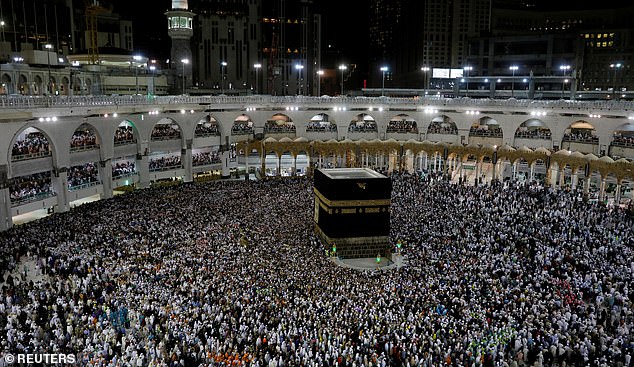 Saudi Arabia has announced that Muslims who want to travel to the country to perform the annual Hajj pilgrimage this year will need to prove that they’ve been vaccinated against Covid-19. The pilgrimage usually draws more than two million Muslims from around the world. Pictured: The Grand Mosque in Mecca during Hajj in 2019

Last year, Saudi officials took the historic decision to allow only a very limited number of worshippers to perform the Hajj amid the surging pandemic.

A total of 1,000 people already within the country were able to participate.

The decision dealt a devastating blow to millions around the world, many of whom plan for and look forward to the trip for years.

The five-day pilgrimage starts this year on the evening of July 17. It is made up of a series of rituals performed in and around Mecca, the holiest city in Islam.

In October, Saudi authorities relaxed restrictions, allowing thousands of pilgrims to perform the Umrah at the Grand Mosque in Mecca for the first time in seven months.

Unlike Hajj, the Umrah can be performed all year round but some measures remained in place to help stop the spread of the virus, including banning pilgrims from touching the Kaaba, the black cubic structure towards which Muslims pray.

Groups were also accompanied by a health worker and the number of medical teams present were increased. 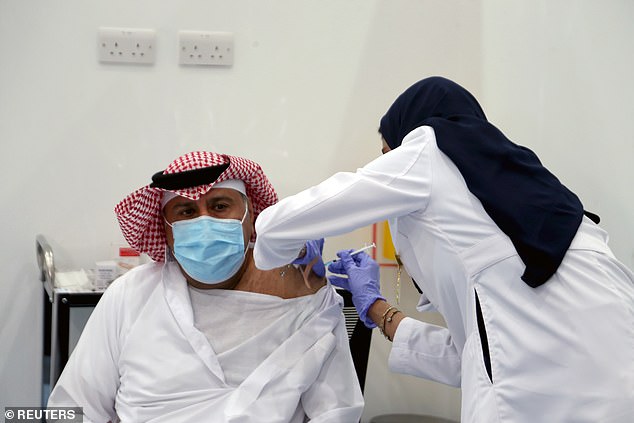 Saudi Arabia has approved the Moderna, Pfizer and AstraZeneca jabs and began vaccinating residents on December 17. Pictured: A Saudi man receives a Covid-19 vaccine in Riyadh on December 17

Saudi Arabia has approved the Moderna, Pfizer and AstraZeneca jabs and began vaccinating residents on December 17.

The number of reported deaths and infections from Covid-19 in the country have remained low since a spike in the summer.

Saudi Arabia has recorded some 378,000 infections and 6,505 deaths since the pandemic began last year.

With would-be pilgrims spread across the world, Saudi Arabia’s vaccine requirement could make it more difficult for Muslims from poorer countries with a smaller supply of the vaccine to undertake the pilgrimage this year.