Soldiers opened fire as a clash erupted with the detained villagers, according to member of parliament. 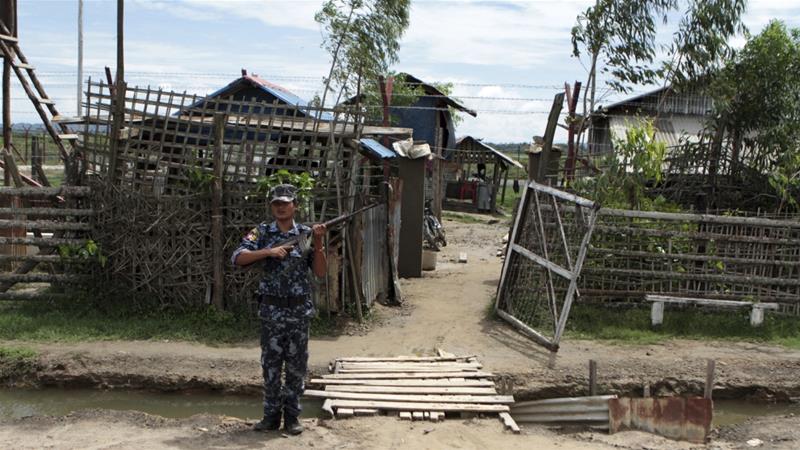 Myanmar security forces have shot dead at least six people in the troubled western state of Rakhine after soldiers and police detained hundreds of people at a school, a military spokesperson said.

The soldiers had rounded up about 275 people during a search for members of the rebel Arakan Army, said Brigadier General Zaw Min Tun from the military’s True News Information Team.

There were conflicting accounts of events leading up to the shooting on Thursday, which took place in an area off-limits to reporters and most aid agencies.

Soldiers opened fire as a clash erupted with the detained villagers, according to Khim Maung Lat, a member of the country’s upper house of the parliament.

“Villagers were shot dead and eight others were seriously injured,” he told Anadolu Agency by phone.

“Before this accident, four civilians were also killed during the interrogation in other villages,” he said.

Zaw Min Tun said some of the detainees attempted to seize weapons in the early hours of the morning, forcing security forces to fire into a crowd.

“We warned them verbally. Then we fired warning shots into the air to disperse the group but they didn’t move, so shots were fired,” he said.

The International Committee of the Red Cross (ICRC) and Myanmar Red Cross said in a statement they had transferred three “seriously injured patients” to hospital in the state capital of Sittwe, as well as two other “civilians” to a local hospital.

“The ICRC is concerned about increasing numbers of civilian casualties during the recent weeks, and urge all parties to the conflict to protect the civilian population in line with International Humanitarian Law,” said Stephan Sakalian, head of delegation in Myanmar for the ICRC.

Rakhine came to global attention after about 740,000 Rohingya Muslims crossed into Bangladesh fleeing a military crackdown in response to fighter attacks in 2017.

UN investigators have called for senior military officers to be prosecuted over allegations of mass killings, gang rapes and arson. The military denies widespread wrongdoing.

More recently, civilians have been caught up in clashes between the military and the Arakan Army, a group that recruits from the mainly Buddhist ethnic Rakhine population and is fighting for greater autonomy for the state.

Since November, the fighting has displaced nearly 33,000 people across a large part of central and northern Rakhine and part of neighbouring Chin state, according to the UN Office for the Coordination of Humanitarian Affairs.