THE HAGUE (Reuters) – Myanmar’s leader Aung San Suu Kyi arrived at the U.N.’s International Court of Justice on Tuesday to defend her country over charges of genocide against its Rohingya Muslim minority, as back home thousands of people rallied in her support. 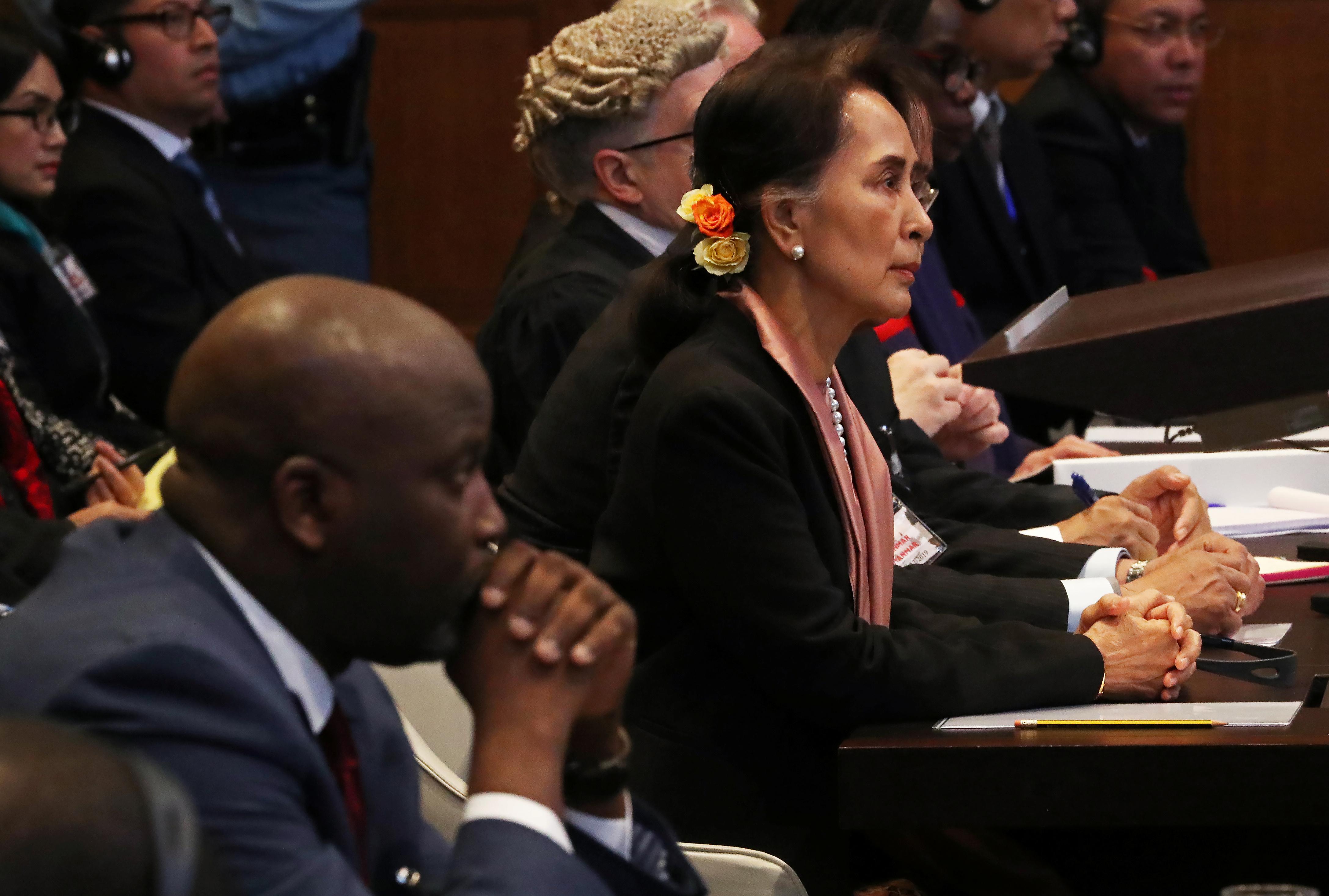 Gambia launched the proceedings against Buddhist-majority Myanmar in November, accusing it of violating its obligations under the 1948 Genocide Convention. It is only the third genocide case filed at the court since World War Two.

During three days of court proceedings Suu Kyi, a Nobel Peace laureate, is expected to repeat denials of genocide and argue that military operations in question were a legitimate counterterrorism response to attacks by Rohingya militants.

Suu Kyi arrived in a motorcade at the ornate Peace Palace in The Hague ahead of the start of proceedings on Tuesday morning. She ignored questions shouted out to her by waiting reporters.

Earlier, thousands of people rallied in Yangon, the commercial capital of Myanmar, carrying posters of Suu Kyi’s face and waving national flags as they chanted: “To protect the country’s dignity, stand with Mother Suu.”

“It’s like Mother Suu went to the frontlines for our country,” said 58-year-old Myint Myint Thwin. “Therefore to show our support and that we stand with her we joined this march.”

This week’s proceedings before a panel of 17 judges will not deal with the core allegation of genocide, but Gambia has requested a court order for Myanmar to halt any activity that may aggravate the dispute.

Gambia, a tiny, Muslim West African country, will argue that Myanmar’s forces carried out widespread and systematic atrocities during what it called “clearance operations” from August 2017 that constituted genocide.

Its court petition accused Myanmar of genocidal acts “intended to destroy the Rohingya as a group, in whole or in part, by the use of mass murder, rape and other forms of sexual violence, as well as the systematic destruction by fire of their villages, often with inhabitants locked inside burning houses”.

The tribunal, also known as the World Court, has no enforcement powers, but its rulings are final and have significant legal weight.

More than 730,000 Rohingya fled Myanmar in 2017 after the military-led crackdown and were forced into squalid camps across the border in Bangladesh.

Hasina Begum, 22, said she was among many women raped by Myanmar soldiers who also burned down her village.

“They have done these things to me, to my relatives and my friends. I can tell them face to face, looking them in the eyes, because I am not lying,” she told Reuters.

Leaving the refugee camp in Bangladesh for the first time since she fled, Hasina arrived in The Hague on Monday with two other victims and an interpreter.

“I feel great,” Hasina said from her hotel room on the eve of hearings. “Myanmar military raped many of our women. We want justice with the help of the international community.”

In the Bangladeshi refugee camps on Tuesday, hundreds gathered on a hilltop and chanted, “Gambia! Gambia!”, pumping their fists. Some offered special prayers at mosques in the camps and many others were fasting.

“Our people were killed, our children were thrown into fire, our women were raped, our houses were burnt down. All we want is a fair trial,” said Nurul Amin, 30. 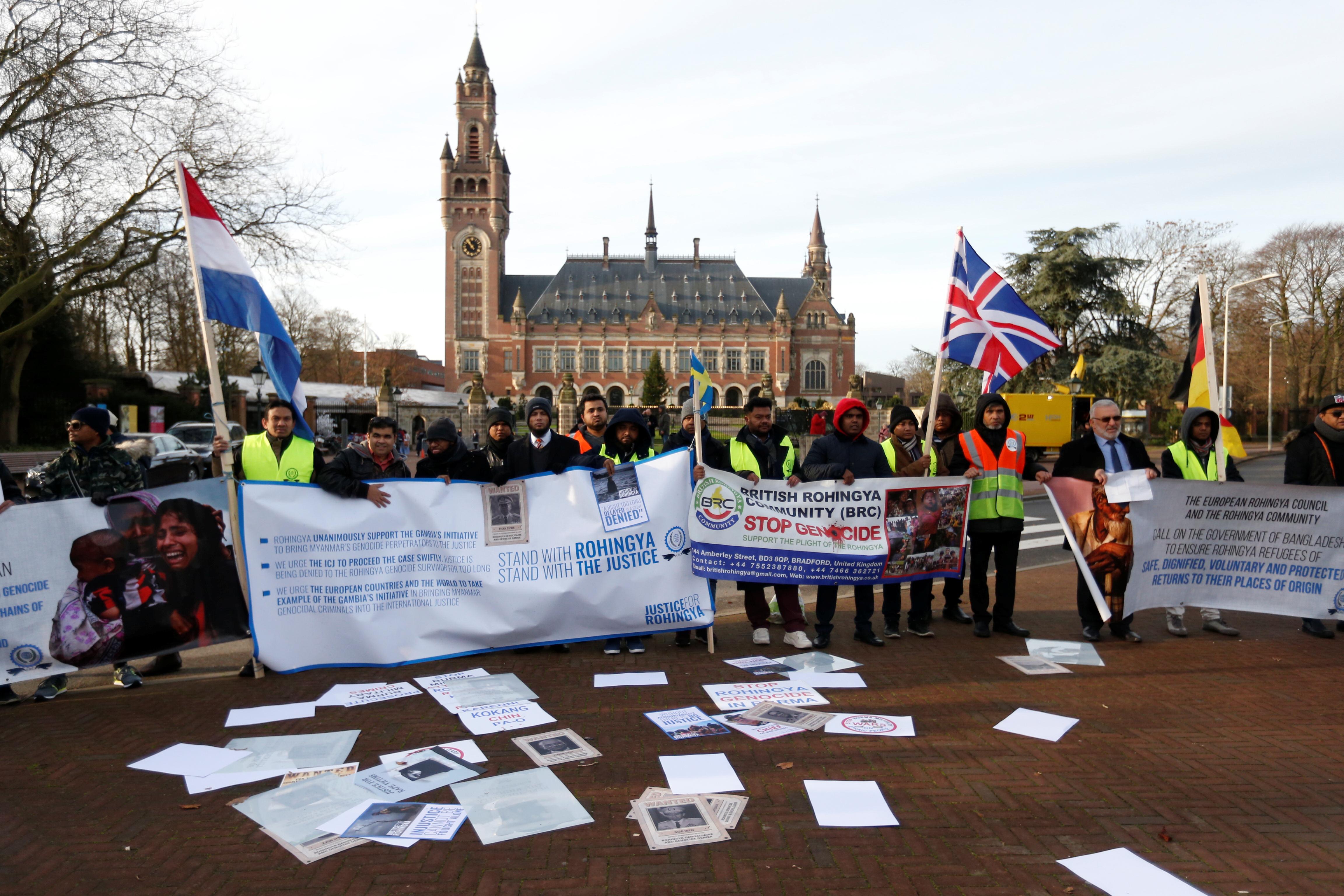 Myanmar has previously denied almost all allegations made by refugees against its troops, including of mass rape, killings and arson, and promised to punish any soldiers involved in what it says were isolated cases of wrongdoing.