New York: The church in Jersey City where they married held a portent in its very name: Our Lady of the Sorrows.

It was the thick of the Depression — 1939 — and they were poor, so poor that just two days after the wedding they returned to their jobs, she as a secretary in a printing plant, he as a singing waiter. 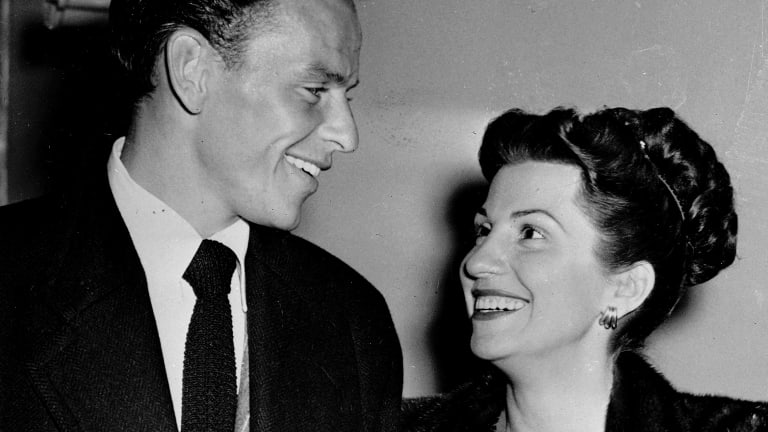 Frank and Nancy Sinatra smile broadly as they leave a Hollywood nightclub in 1946.

She was an ordinary young woman, a plasterer's daughter from a large Italian-American family, born in Jersey City in 1917. Her given names were Nancy Rose, her maiden name Barbato.

He was a far-from-ordinary young man, a scrappy, skinny kid who played the ukulele and sang, born to a small Italian-American family in Hoboken in 1915. His given names were Francis Albert. By now you know his surname.

For a dozen tumultuous years Frank and Nancy Sinatra were man and wife — a swath of time that included hearth, home and children for her and, for him, unparalleled fame and fortune, record deals, motion pictures and a string of extramarital romances that were grist for the gossip columns.

What is surprising, given the circumstances, is that for nearly half a century — from the end of their marriage in 1951 until his death, at 82, in 1998 — Nancy Barbato Sinatra, who died on Friday local time, at 101, remained her ex-husband's cherished friend and quiet confidante, displaying a fealty that was noteworthy even for a woman of her time. Her daughter Nancy Sinatra, the singer, announced the death on Twitter. 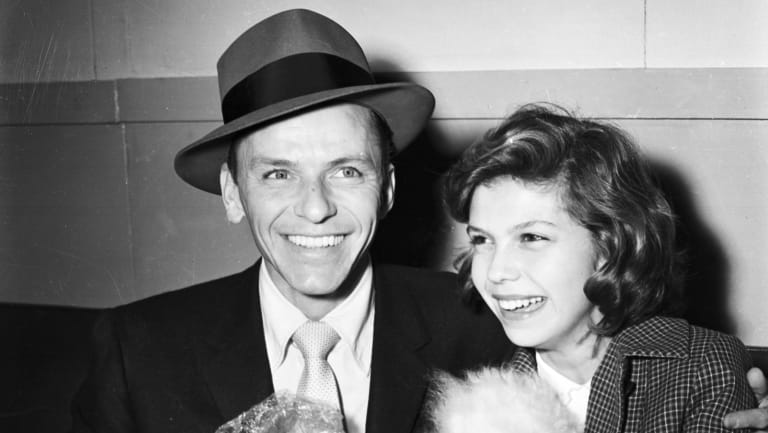 Their marriage had been the first for each of them: He would go on to have three more. It remained, to the end of Nancy's long life, her only one.

"He has more than once sought out Nancy Sinatra, even though she does not fit into the fast-moving, neurotic world he seems to prefer. The simple truth is that today, Frank sees Nancy more regularly than he did through much of their marriage."

In some respects, Nancy Sinatra's life was of a piece with those of many women of the 1930s and '40s. As a young bride, she did all the cooking, making vegetarian spaghetti sauce to save money on meat; sewed her own clothes; encouraged her husband's professional aspirations; and, after trumpeter and band leader Harry James signed him as a singer, travelled with him on the road. 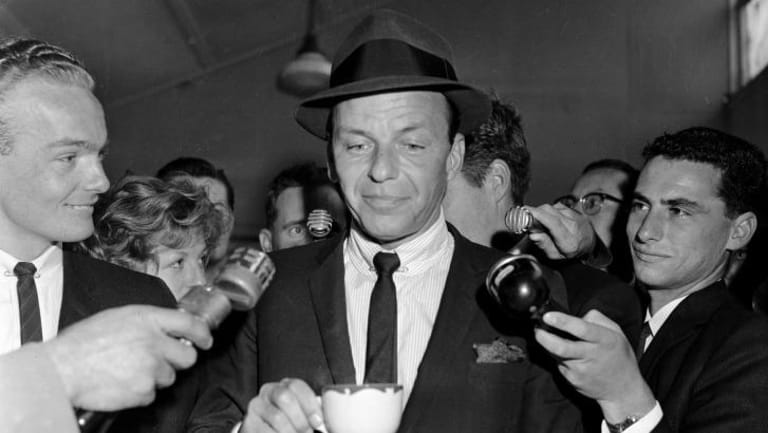 Centre of attention: US singer and actor Frank Sinatra is surrounded during a visit to Sydney in 1961.

In other ways it was singular. She made the bow ties Sinatra wore in performance, sewing new ones each time delirious audience members ripped one from his neck. She answered his fan mail and, in the mid-1940s, followed him to California when a career in motion pictures beckoned.

As his renown grew, she endured rumours of his infidelity with starlets like Marilyn Maxwell and Lana Turner. Rumour became incontrovertible humiliation when he left her for Ava Gardner, one of Hollywood's most celebrated beauties, an event splashed round the world in the headlines.

Alone in her room in their opulent home, she wept quietly at night. For a time, anyway, she declined to give him the divorce he sought.

"I have something too fine and precious to give up," Nancy Sinatra, in one of her rare interviews, said in 1950. 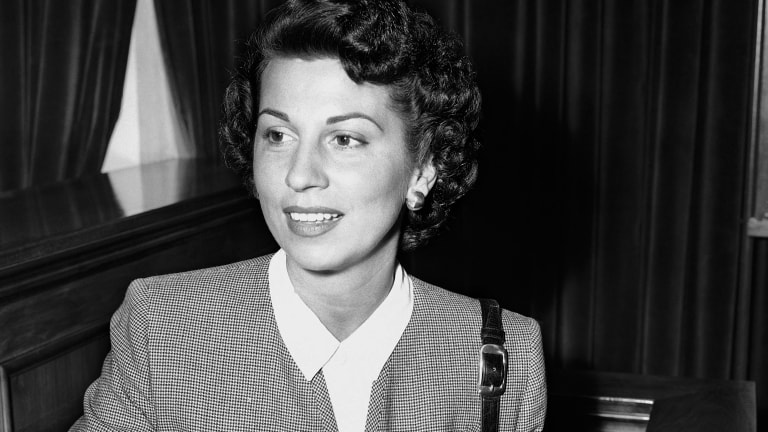 Nancy Sinatra Sr takes the witness stand in Superior Court in Santa Monica where she was granted a decree of separate maintenance from singer Frank Sinatra.

But in the end, for his sake — so the man she loved could marry the woman he loved — she agreed, and they were divorced in 1951. He married Gardner within the week.

It was a matter of record that Nancy Sinatra got custody of their three children: Nancy and Frank jnr, both of whom grew up to have careers as pop singers, and Christina, known as Tina, who became an actor and producer.

She also got the house in Holmby Hills, an exclusive Los Angeles neighbourhood; a Cadillac; and an annual percentage of Sinatra's income.

What was perhaps less widely known was the fact of Frank Sinatra's continuing visits; his long, confiding late-night phone calls; and the convivial family dinners on birthdays, holidays and many other occasions. 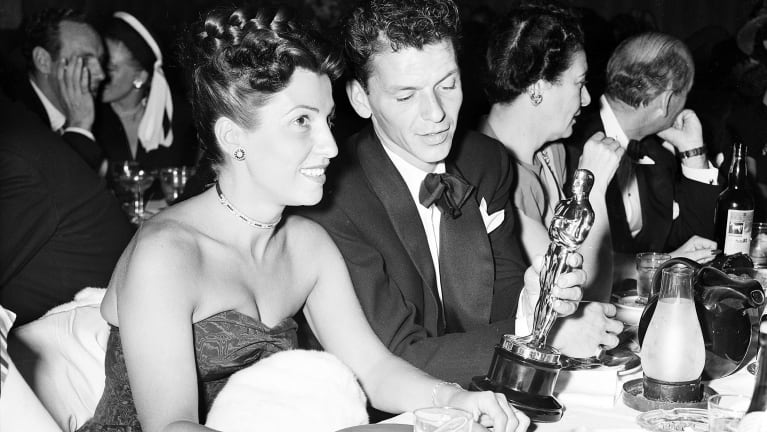 Frank Sinatra steals a glance at his Oscar which he won for his performance in the film “The house I live in,” as his wife Nancy looks on in 1946.

The routine continued through the dissolution of his marriage to Gardner; his career reversals; the kidnapping and eventual safe return, in 1963, of 19-year-old Frank jnr; the elder Sinatra's highly public engagements — both highly publicly broken — to Lauren Bacall and Juliet Prowse; his third marriage, in 1966, to Mia Farrow, 30 years his junior, and its swift demise; and his fourth, in 1976, to Barbara Marx, who survived him.

"Throughout the many years after they split, my grandfather came to visit whenever his crazy life would allow it," Nancy Sinatra's granddaughter AJ Lambert wrote in a 2015 remembrance in Vanity Fair. "I can remember times when she would be on the phone with her ex-husband, and the next thing I knew some eggplant was coming out of the freezer to thaw so that she could make him some sandwiches when he showed up."

One of eight children of Michaelangelo Barbato and the former Jennie Fogacci, Nancy Rose Barbato was born on March 25, 1917, and went on to graduate from William Dickinson High School in Jersey City.

In 1934, when she was 17 and he 19, she met Frank Sinatra in Long Branch, on the Jersey Shore, where both families summered. Early in their marriage, the couple lived in Jersey City; they later moved to Hasbrouck Heights, New Jersey.

Nancy Sinatra was a longtime resident of Beverly Hills, California. Survivors include her daughters Nancy and Tina. Information on other survivors was not immediately available. Her son, Frank jnr, died in 2016, at 72, while on tour in Florida. 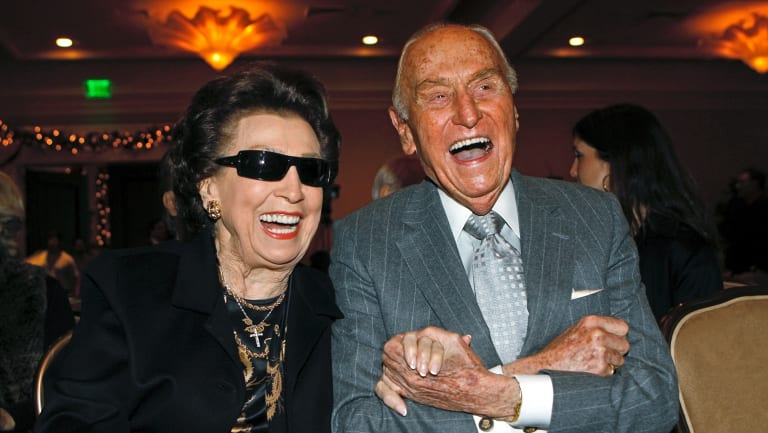 Nancy Sinatra Sr smiles with Paramount Pictures producer AC Lyles, as they attend the unveiling of a giant image of the Frank Sinatra commemorative postal stamp issued on his 92nd birthday in 2007.

In the years after her marriage ended, Nancy Sinatra reared her children; took classes at the University of California, Los Angeles; quietly entertained old Hollywood friends; and did charitable work.

She remained profoundly private, uttering barely a word in public about her life with Sinatra, although their mutual feelings were clear, her granddaughter recalled, to those who knew them best.

Let Nancy Sinatra, who hewed so long to steadfast mid-century propriety, have the last word. As Pete Hamill reported in his book Why Sinatra Matters, first published in 1998, she was asked, later in life, why she had never remarried.

Her answer was impeccable:

"After Sinatra?" she replied.