Jerusalem: For the past 16 months, Israeli Prime Minister Benjamin Netanyahu has doggedly pursued a right-wing dream that he saw as securing his legacy: annexing West Bank territory that the Palestinians counted on for a future state, potentially dealing a death blow to a two-state solution.

On Friday AEST, with his annexation plan already running aground, Netanyahu abruptly walked away from it.

Instead, he exulted in a potential legacy achievement of an entirely different character — one that, unlike annexation, could only improve Israel's ties with the West and much of the Arab world. 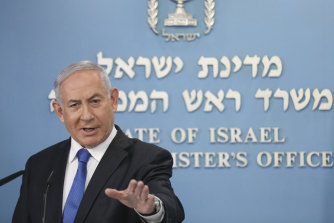 The announcement in Washington that the United Arab Emirates had agreed to a “full normalisation of relations” with Israel in exchange for Netanyahu's agreement to "suspend" his annexation push amounted to a breathtaking U-turn for the veteran Israeli leader.

His drive for sovereignty on the West Bank had pushed Netanyahu into a corner. He was hectored by European leaders, rebuffed by his coalition partners, and distracted from a pandemic that was rapidly spiralling out of his control, even as the goal of annexation seemed ever more elusive. 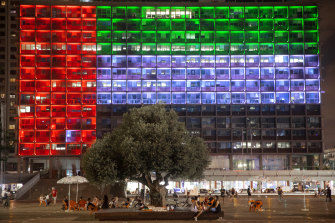 Tel Aviv City Hall is lit up with the flags of the United Arab Emirates and Israel as the countries announced they would be establishing full diplomatic ties. Credit:AP

But the agreement with the Emiratis allowed Netanyahu, who has craved a historic achievement to cap his tenure as his country's longest-serving leader, to rank himself alongside Menachem Begin and Yitzhak Rabin, forerunners who struck peace accords with the nation's former bitter enemies, Egypt and Jordan.

The agreement allows the UAE, too, to enhance its international standing, which has been deeply damaged over its central role in a war that has turned Yemen into a humanitarian disaster, and over its proxy role in the conflict ravaging Libya.

By making an end to annexation the price for bringing into the open a robust diplomatic relationship that had long been one of the Middle East's worst-kept secrets, the UAE could now boast that it was coming to the rescue of the Palestinians, rather than selling them out.

"The cancellation of annexation is merely an excuse for the Emirates," said Shimrit Meir, an Israeli analyst of the Arab world. "This was in the stars for a long time. And framing it as their success in blocking annexation, and as a quid pro quo, makes Palestinian and Arab criticism less harsh." 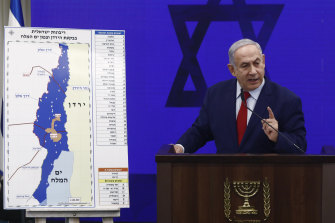 Benjamin Netanyahu had said he would annex war-won West Bank territory if he was re-elected, starting with the Jordan Valley. Credit:Bloomberg

No more than a statement of intent for now, the Israel-UAE agreement, announced by US President Donald Trump, calls for bilateral talks that could eventually produce such concrete achievements as economic relations, collaboration in science and technology, direct flights for Israelis to shop in Dubai or Emirati Muslims to pray at al-Aqsa Mosque, and the opening of embassies in Abu Dhabi and Tel Aviv, if presumably not Jerusalem.

Dennis Ross, a former Middle East negotiator for Republican and Democratic administrations, said that another lure for the Emiratis was the possibility of obtaining advanced weaponry it has long sought, which the United States sells only to countries at peace with Israel to preserve its qualitative military edge in the region.

"It doesn't mean the limits are gone, but they're more favourable," Ross said. He said he would expect the UAE to get weapons like advanced drones.

Ross said that the Emiratis had pressed for the agreement with Israel after concluding that Netanyahu was bent on annexation. "Nothing could stop Netanyahu except Trump, so they had to give Trump a reason to say no," he said. "And normalisation did the trick."

Sceptics noted that Israel and the UAE had never faced one another in battle, and that their relations had long since ceased to look like those of enemies. The Emiratis have hosted Israeli ministers and athletes, and invited Israel to the Dubai Expo 2020, which was delayed until 2021 because of the pandemic.

"It's an agreement to partially normalise ties between two countries who already have partially normalised ties," Ofer Zalzberg, an analyst at International Crisis Group, wrote on Twitter. "Annexation is suspended in order to formalise & publicise those ties." 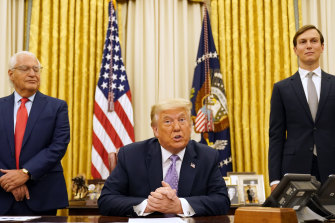 President Trump speaks in the Oval Office on Thursday, announcing that the United Arab Emirates and Israel have agreed to establish full diplomatic ties.Credit:AP

Amos Gilead, an Israeli security expert who once served as an unofficial emissary to the Emirates, said he welcomed any steps toward normalisation but would need to be convinced. "I'm not sure the UAE as I know them will open an embassy in Tel Aviv," he said. "I want to see it with my eyes."

Whatever comes of the more grandiose possibilities sketched out by Trump in the Oval Office, flanked by his Middle East team, and by Netanyahu in a swaggering solo news conference two hours later, the immediate benefit for all three parties involved was clear: it allowed them to change the subject.

"This is all about Trump being able to say, 'Look what a great deal-maker I am, I've brought peace to the Middle East,' and about Bibi being able to distract Israelis for a few hours," said Anshel Pfeffer, a biographer of Netanyahu, referring to him by his nickname. Pfeffer had boldly predicted in May that the Prime Minister would never fulfil his annexation pledges.

For Netanyahu, the diplomatic coup came as a throwback of sorts to a time before the coronavirus, before he required three elections to defeat a political novice and form a government, before his indictment on corruption charges including bribery threatened to not only end his career but also send him to prison.

His stock had momentarily soared early in the pandemic, but it has plunged since: Israel's caseload now is greater than China's, its hospital system is approaching overload and its schools are planning a reopening that many fear will be a disaster.

More than 800,000 Israelis are out of work, and protesters have been flooding the streets and clamouring outside Netanyahu's residence several times a week in a demonstration of sustained political anger that experts say modern Jerusalem has never seen.

With his criminal trial set to ramp up early next year, Netanyahu has threatened to take Israel to a fourth election, in hopes of legislating his way out of the dock. But a poll this week showed him again falling short of a majority in parliament.

The rabbit-from-a-hat quality to the agreement with the UAE was vintage Netanyahu.

"He wasn't functioning the way he was expected to, and this is the first time in a long period where he shows leadership and brings to the table something that no other politician allegedly can," said Meir, the analyst. "The subtext is that he's still got it: He's still a leader, and the others are merely politicians."

While Israeli voters were unlikely to forget their pandemic-related concerns in joy at the news about the UAE, the halt to annexation was welcomed by the centre and left.

On the right, some settler leaders predictably cried foul. But Oded Revivi, the mayor of Efrat, a bustling West Bank settlement, praised Netanyahu for turning the threat of annexation to Israel's advantage, even when in reality it was going nowhere. "We're not really paying a price, and yet we're moving forward on normalisation," he said.

Dahlia Scheindlin, a left-wing analyst and pollster, said that even Israelis who dislikes Netanyahu saw him as the country's foremost statesman. "He knows that it keeps the crown of 'King Bibi' on his head in the country's eyes," she said.

Indeed, Netanyahu crowed to Israeli journalists on Thursday night: "I vowed to bring peace with the Arab countries, and you ridiculed me."

He reminded them that he had long promised that Israel could gain international acceptance even without a settlement with the Palestinians. And he rhapsodised about his mastery of power geopolitics, boasting of his meetings with leaders in Oman and Sudan.

In secret talks, he said, "I tell Muslim and Arab leaders that peace with Israel is worthwhile to you because Israel is strong."

"I don't hesitate to stand up to Iran," he added. "And if need be, I can go against the entire world."