Nevada charter school's students were instructed to link aspects of their identity with oppression: lawsuit 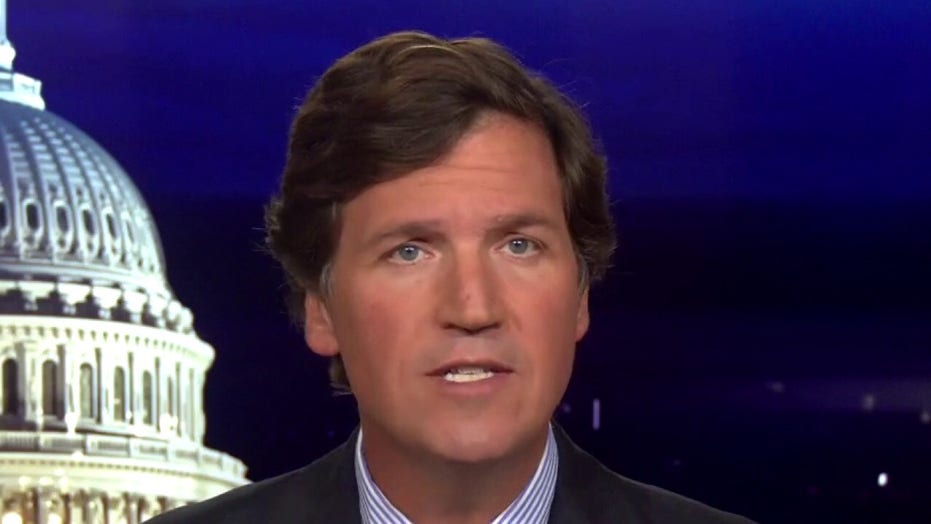 Tucker: Critical race theory is a lie from start to finish

Critical race theory is the latest attempt by the most privileged people in our society to displace the blame for their mismanagement of the country onto the people below them.

A publicly funded charter school in Nevada created a hostile environment for students by instructing them to associate aspects of their identity with oppression, a new lawsuit alleges.

The suit was filed Tuesday by a high school senior at Democracy Prep at the Agassi campus in Las Vegas, who claims he was forced to take the course — titled "Sociology of Change" — in order to graduate.

William Clark, whose mother is Black and deceased father was White, claims he felt discriminated against and harassed by various aspects of the course — including an alleged assertion that by not identifying with an oppressive group, students were exercising their privilege or underscoring their status as an oppressor. 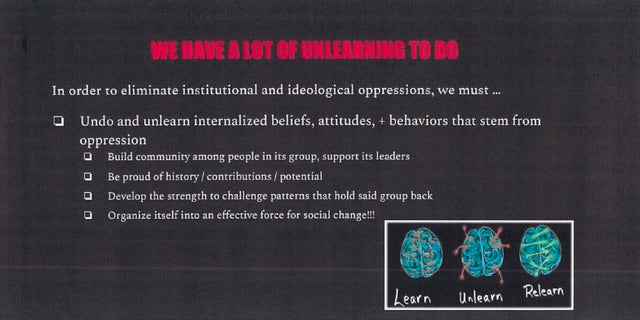 Democracy Prep class slide telling students they should unlearn and challenge beliefs that stem from oppression. 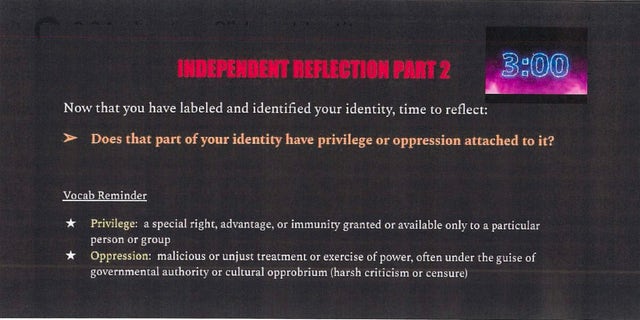 Clark and his mother, Gabrielle, are seeking damages for severe mental and emotional distress, as well as allegedly "permanent" damages to his academic career.

Rather than allowing William Clark to avoid the class or replace it with other alternatives, the school insisted he complete it, according to the complaint.

One of the instructional slides included in the complaint shows lists dominant groups in American culture as "white," "male," "middle/upper class," "heterosexual," and "protestant/Christian," while "everyone else" is classified as "submissive."

Kathryn Bass, Clark's teacher who is named as a defendant in the suit, similarly associates elements of her own identity — like "White, Irish, American citizen" — with "privilege." Others like "female" and "working class" are associated with an "oppressive" label. Meanwhile, she says she's "both privilege and oppressive" in her identifying as "bisexual" and having a mental health disability. 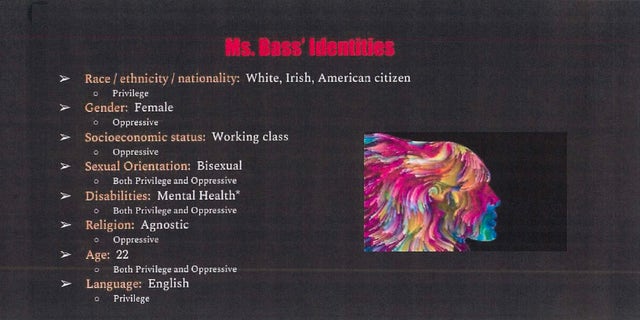 Democracy Prep class slide identifying a teacher, Kathryn Bass, as oppressive and privileged according to aspects of her identity.

She also allegedly addressed students as "social justice warriors," taught students that "[B]lack prejudice does not affect the rights of white people," and used a meme to argue "reverse racism doesn't exist." 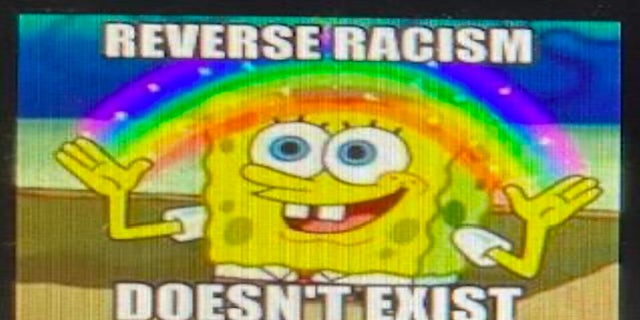 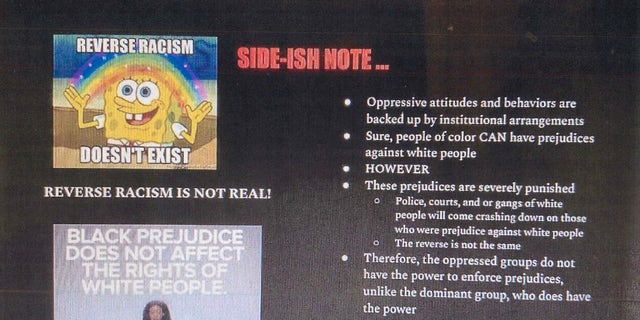 The meme, which features cartoon character Spongebob Squarepants and a rainbow, is typically used online to convey ideas in a condescending manner.

Clark and others in his class allegedly objected when they were taught those ideas, according to the complaint. The complaint, which was filed in a Nevada district court, claims that Bass "terminated class discussion" amid in response to Clark's claim that "everyone can be racist" and "that prejudice anywhere from anyone can harm others." 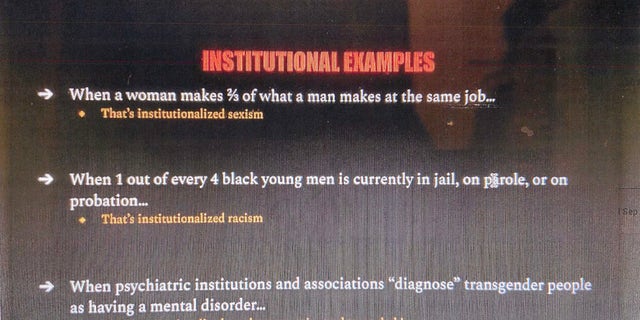 "For this protected speech and others like it, Defendant Kathryn Bass terminated class discussion immediately with the intent to chill and discourage future objections to Defendants’ sponsored politicized ideology," the complaint reads. It also points out that although the school has encouraged other forms of dissent, like "occupying a cafeteria," the same privilege seemed to not extend to Clark.

Besides Bass, the lawsuit names other higher-level officials, whom they claim were involved in pushing the curriculum onto students.

Clark's mother, Gabrielle, told Fox News that the instruction her son received created psychological distress for both of them. "I was really worried about his physical safety," she said.

Her son is "generally regarded as [W]hite by his peers," according to the complaint, and has "green eyes and blondish hair."

"Defendants, who include a state funded and sponsored charter school, teachers and senior administrators, have deliberately created a hostile educational environment for Plaintiff William Clark, who, unlike his classmates appears to be and is regarded by his peers as white," the complaint reads. "Defendants thus discriminated on the basis of race and color, in addition to sex, gender and religion, in violation of Title VI and Title IX of the Education Amendments of 1972."

Part of the suit entails Gabrielle Clark's claim that the instruction violated her rights as a parent and contradicted ideas she conveyed to her son about Christianity and family.

Gabrielle Clark told Fox News: "I tried to instill in all of my children that you need to respect everyone and treat everyone the same … and do what Martin Luther King said. You don't judge people on the color of their skin. You judge them on the content of their character."

A spokesperson for Democracy Prep said the school hadn't been served with the lawsuit.

Tuesday's was just the latest in a series of complaints raised throughout the country in which schools or government institutions came under fire for promoting ideas generally associated with "critical race theory." The Clarks', however, appear to have brought the first and well-publicized suit of its nature.

Leaked, racialized material previously streamed out of federal agencies, prompting the Trump administration to issue an executive order and ban trainings involving certain ideas about race and identity. Just before the election, Trump installed a commission he said was designed to promote "patriotic education."

M.E. Hart, an attorney who has conducted diversity training sessions for businesses and the federal government, told The Washington Post that it can improve morale, cooperation and efficiency.

"If we are going to live up to this nation’s promise — ‘We hold these truths to be self-evident, that all men are created equal’ – we have to see each other as human beings, and we have to do whatever it takes, including taking whatever classes make that possible," Hart told the Post. "These classes have been very powerful in allowing people to do that, and we need them more than ever. There’s danger here."

But some, like the president, have argued that ideas like these are actually divisive by conflating individuals with the institutions or groups to which they belong.

The Clarks' lawsuit includes a claim that the school infringed on his privacy by requiring him to fill out a form identifying himself with certain identity categories.

Bass' course appeared to extend beyond lessons about individual identity and encouraged students to read facts through an ideological lens. One of the slides, labeled "Institutional Examples," makes statements like "when a woman makes 2/3 of what a man makes at the same job… that's institutionalized sexism."

Another reads: "When psychiatric institutions and associations 'diagnose' transgender people as having a mental disorder… That's institutionalized gender opprssion and transphobia."

A copy of the lawsuit was posted to Schoolhouserights.org.