Seoul: North Korea has named a sharp-tongued former army officer with little foreign policy experience as its top diplomat, in a possible indication it will take a harder line with Washington in stalled nuclear negotiations. 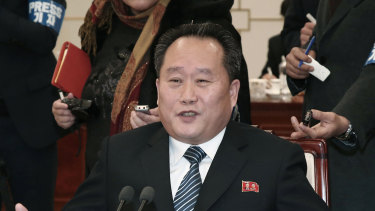 Ri Son Gwon's new title as foreign minister was disclosed on Friday in a Korean Central News Agency dispatch that said he attended a reception for foreign diplomats in Pyongyang the previous day.

In his speech at the banquet, "Comrade Ri Son Gwon said that the Korean people have turned out in the general offensive to break through head-on the barriers to the advance of socialist construction by dint of self-reliance … and made public the foreign policy stand of the (North Korean) government," KCNA said.

Ri, an outspoken retired army colonel who previously headed a government body responsible for relations with South Korea, has taken part in numerous inter-Korean military talks over the past 15 years. But Ri, who is also an alternate member of the ruling Workers' Party Central Committee, lacks experience in negotiations with the United States and other countries. 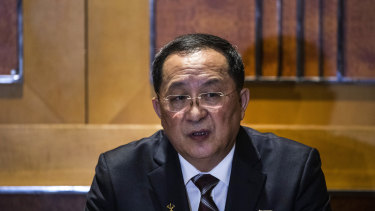 In South Korea, he is most known for what were seen as rude remarks to South Korean businessmen visiting Pyongyang in September 2018. While they were eating naengmyeon, Korean traditional cold noodles, Ri asked them: "Are naengmyeon going down your throats?" in apparent dissatisfaction with a lack of progress in efforts to promote inter-Korean economic projects, according to South Korean officials and lawmakers.

Many conservatives in South Korea strongly criticised him.

Ri replaced Ri Yong Ho, a career diplomat with broad experiences who had taken part in nuclear negotiations with the United States since early 2018. It wasn't immediately known what happened to Ri Yong Ho, whose name was last mentioned in KCNA last August.

Analyst Cheong Seong-Chang at South Korea's private Sejong Institute said Ri Son Gwon's appointment signalled North Korea would further harden its stance toward the US and bolster a push to cement its position as a nuclear state.

"From now on, it's difficult to expect meaningful progress in North Korea-US diplomacy," Cheong said.

Nuclear talks between the US and North Korea have progressed little since the breakdown of the second summit between President Donald Trump and North Korean leader Kim Jong-un in Vietnam in February 2019. Kim recently said North Korea would strengthen its nuclear arsenal and unveil a new "strategic weapon" after the US failed to meet a year-end deadline set by him to make concessions.