New prayer monument will dwarf the Angel of the North

A new monument dubbed the Eternal Wall of Answered Prayer will be built with a million bricks rising to the same high as Nelson’s Column, dwarfing the Angel of the North.

Building work on the Christian monument is set to be begin in the spring of 2021, with each brick supposed to represent a prayer answered by God.

The monument – designed by architects in Southampton – features an ‘infinity loop’ that will arch over the building, reaching heights of 169ft once it is built in Coleshill, just outside Birmingham.

Once built, the Eternall Wall of Answered Prayer in Coleshill, near Birmingham, will rise to 169ft

Once complete, it will be less than two feet shorter than Nelson’s Column.

It will be more than twice the size of the Angel of the North, which stands at 66ft, and eleven times the size of a standard double-decker bus.

Building is expected to be complete by 2022.

Former Leicester City FC chaplain Rich Gamble says the concept of the monument first came to him a vision 14 years ago, as he carried a wooden cross through Leicestershire to mark Easter.

The monument will feature an ‘infinite loop,’ by architects in Southampton, who won an international competition to design it

He told The Sunday Times: ‘As I was going round, I just felt the vision flash into my head. 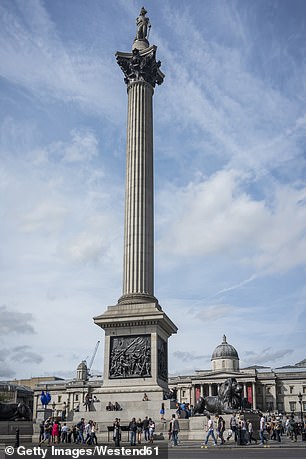 It will be less than two feet shorter than Nelson’s Column in Trafalgar Square, London

‘I had the idea of creating something, to build a wall where every brick represented an answered prayer … as a way to communicate to people outside the church that miracles are still happening every day in this nation.’

In 2016 he quite his job running a software business and started a crowdfunding campaign to see his vision come to light.

Managing to raise £47,000 he was able to run a competition to find an architect for its design. Out of 133 entries from around the world, Snug Architects in Southampton was chosen for its ‘infinity loop’ design.

Once built, he expects it will draw in around 300,000 visitors a year and raise £9million for the local economy.

Mr Gamble added: ‘I am supremely confident that this is going to happen. I’ve been laughed at and I’ve had abusive phone calls along the way, but we’ve had so many miracles so far that it’s not even a question in my mind about whether we’ll get it over the line.’