New footage has emerged showing Russia’s most expensive and up-to-date tank getting destroyed by Ukrainian forces during fighting in Donbas.

Drone footage, issued by Ukraine’s Ministry of Defence today, shows the T-90M – a £4million latest-generation war machine – exploding after being hit during the battle for Stary Saltiv, to the north of Kharkiv, last week.

More footage then shows what appears to be the burned-out husk of the same tank, with a large hole through the tracks on its right side and evidence of an explosion at the rear with its armour plating bent outwards.

The Ukrainian MoD claimed the tank was taken out by a Carl Gustaf recoilless rifle – a Swedish-made rocket launcher that costs around £18,500, including the rocket.

‘The pride of the Russian tank industry was destroyed by the Swedish hand-held anti-tank grenade launcher Carl Gustaf,’ the ministry said in a tweet. 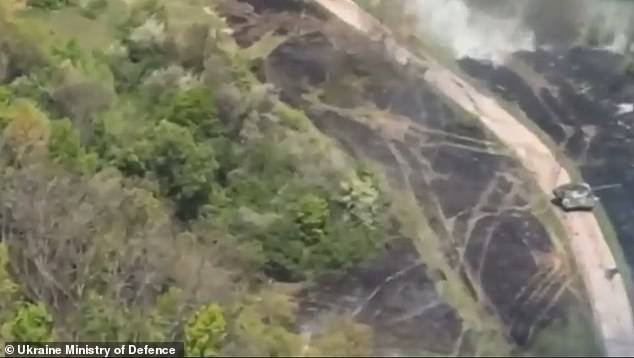 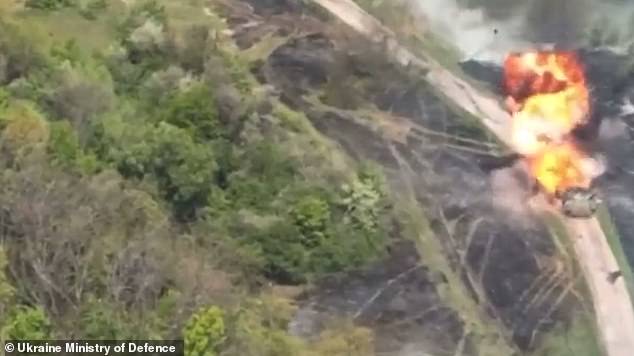 ‘We thank the Swedish people and the King for their help.’

Footage of the wreck suggests the rocket evaded the T-90’s advanced armour and defence systems by smashing through the wheels.

It then exploded inside the engine compartment, appearing to detonate ammunition along the way which produced a large blast.

The video emerged as Ukrainian forces push out from Kharkiv in a sweeping counter-attack towards the Russian border.

Having recaptured Stary Saltiv from Putin’s troops on May 3, Ukraine’s forces have now pushed six miles further up the road to Rubizhne in a move that puts them less than 10 miles from the Ukraine border.

It is unclear exactly when the T-90M tank was destroyed, though Russia launched a failed counter-attack on May 5 which is around the same time footage first emerged.

The T-90M is an upgraded version of Russia’s most-common battle tank – the T-72, which has led the fighting in Ukraine – and is equipped with technology which is supposed to make it more difficult to destroy.

Shtora – or ‘curtain’ – is an electrical jammer fitted to T-90 tanks that deploys smoke grenades when the tank is being targeted by a missile to make it harder to hit, and infrared lights designed to ‘dazzle’ the guidance system and throw it off target.

T-90s are also fitted with reactive armour tiles that are similar to Russia’s other tanks and are designed to explode when struck – throwing incoming projectiles off target.

It also features composite armour that is supposed to be tougher than its predecessors and an improved engine that gives it better manoeuvrability.

The T-90 entered service in 1992 but has been upgraded several times since, with the T-90M being available for combat missions from 2016.

It replacement – the T-14 Armata – has not yet entered production, making the T-90M Russia’s most-up-to-date tank.

‘The T-90M was introduced in 2016 and includes improved armour, an upgraded gun and enhanced satellite navigation systems,’ the UK MoD said after footage of the tank exploding first emerged.

‘Approximately 100 T-90M tanks are currently in service amongst Russia’s best equipped units, including those fighting in Ukraine.

Western nations have supplied thousands of anti-tank weapons to Ukraine since Russia began building its forces on the border late last year and have used them to destroy thousands of vehicles since the invasion went ahead.

By Kyiv’s latest count, Russia has lost 1,170 tanks or a little over 40 per cent of its entire tank force, according to the Institute for Strategic Studies.

Oryx, which has been analysing images of the conflict to confirm losses, says Russia has seen at least 643 of its tanks blown up, or 12 per cent of the total. 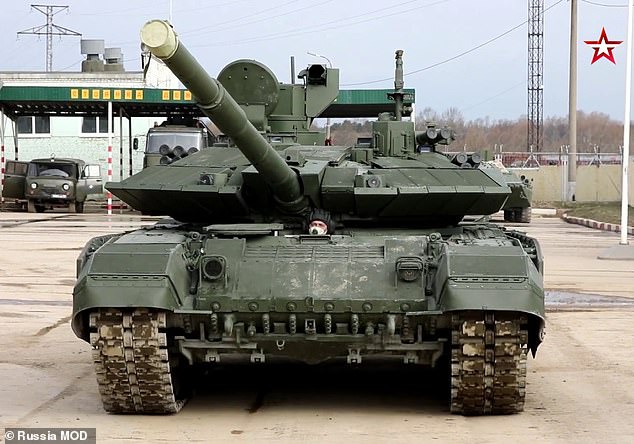 The T-90M is Russia’s latest-generation battle tank, and only entered active service in 2016

Russia has not given an accurate estimate of its losses.

Ukrainian counter-attacks from Kharkiv have managed to recapture a swathe of territory from Russia – putting troops within striking distance of the border and threatening supply lines down into the Donbas.

If their forces can capture or disrupt the Russians’ main supply route using artillery strikes, then it puts troops involved in bitter fighting around Izyum in danger of getting cut off and isolated.

Similar counter-attacks around Kyiv earlier in the war saw the Russian offensive stall and then turn into a retreat.

It is far from certain that the result will be the same in the battle for Donbas – the outcome of which is seen as pivotal to winning the war – but it does give Ukraine a plausible path to victory.

Russia’s path is less easy to see, as its offensive along a stretch of frontline hundreds of miles long grinds on without major breakthroughs.

Putin’s troops captured the city of Popansa last week – after raising it to the ground – and are now fighting for control of Lyman, around 35 miles to the north.

Like Ukraine, their aim is to surround and cut off troops in the region – first around Severodonetsk and then Kramatorsk.

Capturing these two cities – along with Mariupol, where Ukrainian defenders are still holding out – would allow them to claim control over the Donbas which Putin now says is the real objective of his ‘special military operation’.

But the task is daunting for a military that has so-far shown itself to be lacking in manpower, resources, technical know-how and good leadership.

Should it prove a failure, then it is hard to see how Putin will be able to claim any kind of victory – and it is unclear what would happen then.