Many can be seen wearing Trump paraphernalia. One man waves an American flag while the crowd chants, “U-S-A! U-S-A!”

“Everybody, go eat! That is what we’re here to do!” shouts one of the protesters.

Once seated in the dining area, the crowd chants, “F— Joe Biden!” and “My body! My choice!”

“We shouldn’t be carrying papers and showing papers because we live in America. We’re the land of the free,” a female demonstrator told Scootercaster in an interview.

“I don’t like experiments,” an American flag waver told Scootercaster. “Whatever happened to ‘my body, my choice?’”

New York City residents and visitors are required to show proof of vaccination for indoor dining, gyms and shows.

Democratic Mayor Bill de Blasio touted the city as the first in the nation to take this approach. The city launched the policy – dubbed the “Key to NYC” – on Aug. 16 and began enforcing it on Sept. 13.

Scootercaster posted a follow-up video Sunday chastising the reporting about her initial videos. She said the crowd did not break through security as some outlets had reported.

She said the demonstrators were not asked to show vaccine cards, despite a sign at the entrance stating its requirement.

John Matland, 36, who organized the demonstration and runs the Instagram page “We the People are the News,” told Fox News the aim of the protest was to show people that the vaccine mandate is not being enforced. 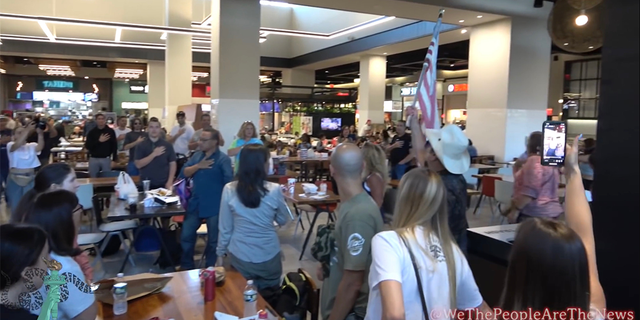 “There were multiple levels to what we were accomplishing,” Matland said. “We were stimulating the economy of the mall, people were going to go shop afterward if they chose to. But, specifically, the food court would be getting an influx of money and support. We would be proving that you can’t enforce this and that there is no avenue with legal standing to do so. And we were showing that if people walked in, sat down, they wouldn’t really be stopped. Which we weren’t.”