New York: A recent power outage that disrupted half of New York City’s subway system for several hours and stranded hundreds of passengers was likely caused by someone accidentally pressing an “Emergency Power Off” button, according to investigations released on Friday.

Outside investigators looking into the disruption on the night of August 29 said there was a “strong possibility” that the button was accidentally pressed since the plastic guard designed to prevent accidental activation was missing, according to a pair of reports released by New York Governor Kathy Hochul. 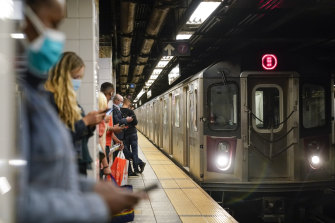 The breakdown affected the subway system’s numbered lines plus the L train for several hours.Credit:AP

The unprecedented breakdown affected more than 80 trains, giving a black eye to a sprawling transit system that has since been hit with flooding from the remnants of Hurricane Ida. Hochul ordered a full review of operation control centres across the Metropolitan Transportation Authority to identify and fix potential weaknesses.

“New Yorkers deserve absolute confidence in a fully functioning subway system, and it is our job to restore that confidence,” Hochul said in a statement.

The breakdown affected the subway system’s numbered lines plus the L train for several hours beginning shortly after 9pm that Sunday. Officials have said restoration of service was delayed because passengers on two of the stuck trains walked out onto the tracks by themselves rather than waiting for rescuers.

The button was pushed after a power dip lasting several milliseconds at 8.25pm and the subsequent discovery that several pieces of mechanical equipment at the New York City Transit Rail Control Centre stopped functioning.

Control centre staff worked to get the equipment back into service. Then someone pushed the emergency button, causing all electrical equipment connected to one of the power distribution units at the centre to lose power at 9.06pm. Power was restored by 10.30pm, according to the reports.

Officials blamed the loss of power on human error and the failure to restore power for 84 minutes to inadequate organisational structure and a lack of guidelines.

MTA acting chair and chief executive officer Janno Lieber said the agency will immediately reorganise how it maintains and manages the key systems that support the control centre.