A teacher’s group protesting mandatory vaccinations was seen in New York City marching across the Brooklyn Bridge, with some protesters chanting against President Biden.

“F–k Joe Biden,” people were heard chanting while walking across the Brooklyn Bridge, in a video posted to Twitter on Monday.

They were also carrying signs reading, “Last years heroes, this years unemployed,” “My body, my choice,” and “I call the shots.” Another video posted to social media also shows protesters chanting “F–k Joe Biden” from the Brooklyn Pier.

The videos come as a protest organized by Teachers for Choice was held in Foley Square on Monday. 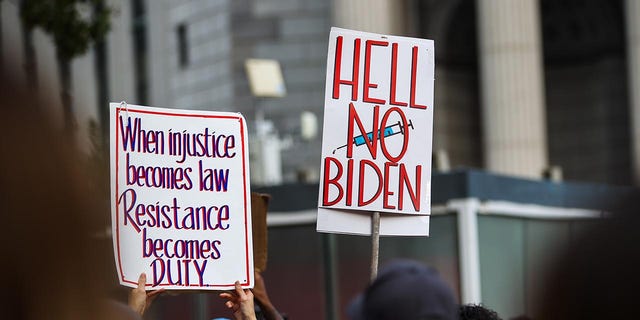 Hundreds of people, including current and retired teachers, parents and other school staffers, were seen in Foley Square Monday denouncing mandatory vaccines in order for people to keep their jobs. The protesters from the Foley Square “Freedom Rally” then walked across the Brooklyn Bridge.

“I have lived and worked in this city as a civil servant for 28 years of my life,” retired teacher Amy Carroll told PIX11. “I should be able to make my own health decisions and make a decision that doesn’t affect my employment that doesn’t affect my right to go to a restaurant, or a Broadway play, a museum.”

Her husband, retired teacher Bill Carroll, added: “I think what they’re doing in America, they’re taking away our rights about all decisions, medical decisions, we’re standing here we’re letting the government take over everything.” 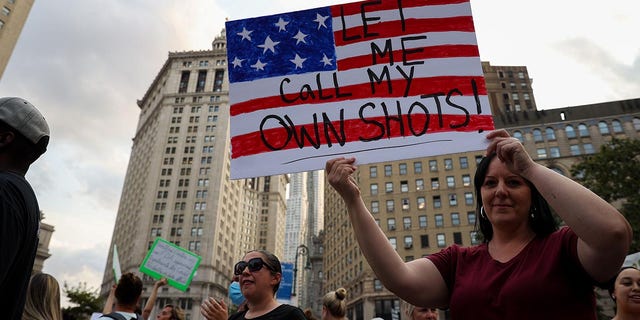 The protests come after Mayor Bill de Blasio announced last month that all employees of the Department of Education must get vaccinated by Sept 27.  Last week, Biden announced a sweeping new vaccine mandate requiring employees at companies with over 100 workers to get vaccinated or be tested for the coronavirus on a weekly basis.

“I came with a bunch of teachers from a school in Whitestone, Queens,” teacher Alycia Morell added to PIX11.  “We’re here because of the mandates, some of us are even vaccinated, but we’re fighting the mandate and we don’t want the children to have to be mandated for vaccines — so we’re fighting for everybody not just ourselves.”

Teachers for Choice say it will file a lawsuit against the city over the vaccine mandate.