All NHS staff should be tested weekly for coronavirus as a matter of urgency, MPs say

All NHS staff must be tested for coronavirus every week to prevent them being put at ‘further unnecessary risk’ of catching and spreading the virus, MPs have said.

The Health and Social Care Committee urged ministers to provide swabs to Britain’s 1.3million-strong healthcare workforce as a matter of urgency, and warned it was ‘yet to understand’ why they had not done this earlier.

Matt Hancock pledged ‘regular surveillance testing’ for nurses and doctors on June 24, but has since failed to follow up on his commitment.

Weekly testing is already available to care homes, but many revealed yesterday that they have staff members waiting a week or more for their results, meaning they are often going for a second swab before receiving the results from the first.

The UK’s ‘world-leading’ testing system went into meltdown after schools and offices returned in September, with demand spiralling up to four times capacity. Officials claimed the delays in processing swabs was due to a ‘bottle neck’ in laboratories, leaving them unable to complete more than 250,000 tests a day. Boris Johnson has promised to raise this to 500,000 by the end of October. 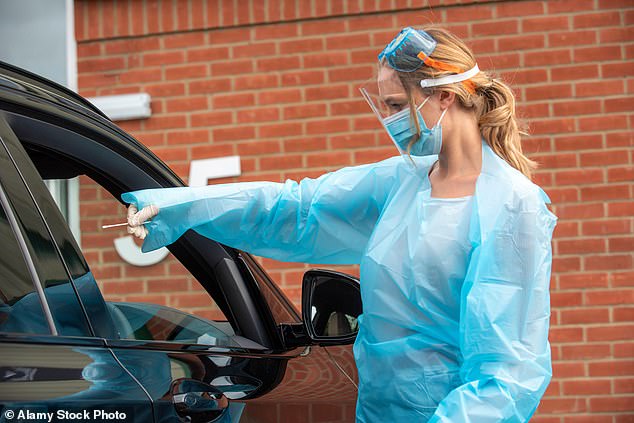 The Health and Social Care Committee urged ministers to provide weekly swabs for Britain’s 1.3million-strong NHS workforce no later than the end of October. (Stock) 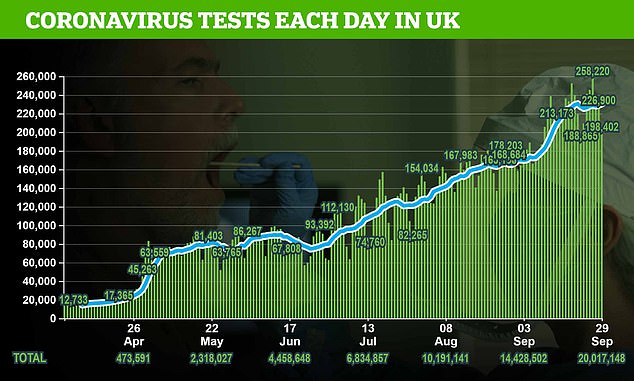 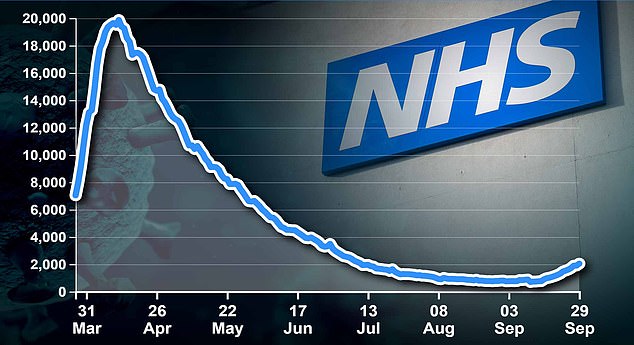 There were 2,049 patients being treated for the disease on Sunday, rising from 764 a fortnight ago and 1,319 last week. This figure had been falling for four months straight after peaking at 20,000 in mid-April

Care homes are waiting up to three weeks to get their coronavirus test results, it was claimed today as the UK’s swabbing fiasco continues.

The Government had promised to get carers swabbed every week, and residents every 28 days, so new cases could be detected quickly and isolated.

But the ‘world-leading’ testing system is failing to turn around samples on time as it battles to get through an ever-growing backlog of samples.

Care home leaders have branded the situation ‘totally unacceptable’, and warned it is only going to ‘get worse, not better’ because ‘test results are not coming back quickly enough’.

The chairman of the Sheffield Care Association, Nicola Richards, told the Daily Telegraph she had to wait almost three weeks to get results for some swabs carried out on staff.

‘Such a delay is putting the residents, staff and the public at serious risk,’ she said. ‘By not getting the results back in a timely manner, it’s unsafe.

‘I know it’s a national problem as well as a local one. We have a Whatsapp group for local care professionals, and there are people on that group saying they haven’t had results for a week.’

Holding the Government’s feet to the fire, the cross-party group of MPs urged them, in a report published today, to explain ‘why it is yet to implement weekly testing of all NHS staff’.

They added: ‘The committee accepts the advice from many eminent scientists that there is a significant risk that not testing NHS staff routinely could lead to higher levels of nosocomial (hospital-acquired) infections in any second spike.

‘Regular testing of NHS staff will also help to reassure the public that NHS services are safe to use.’

The committee said further clarification was also needed from England’s chief medical officer, Professor Chris Whitty, regarding ‘whether he has advised the Government to introduce routine testing of all NHS staff in the current virus hotspots and if not, why’.

Health and Social Care Committee chairman, and former health secretary, Jeremy Hunt, said: ‘Weekly testing of NHS staff has been repeatedly promised in hotspot areas – but is still not being delivered.

‘Failure to do so creates a real risk that the NHS will be forced to retreat into being a largely Covid-only service during a second spike.’

The report also sets out failures in communication with patients about delays and cancellations to their referrals and appointments as a result of the pandemic.

‘Some patients – even with life-threatening conditions such as cancer – have reported the emotional distress that has resulted from them being unclear as to when their medical appointment will take place,’ they said.

MPs cited the NHS Confederation, which has warned that the overall waiting list for treatment could grow from 4.2million to 10 million or more.

Urgent cancer referrals have also suffered a massive drop and there has been ‘substantial disruption to chemotherapy appointments’, the report said.

‘During our inquiry, we have heard about the backlog of appointments, a decrease in referral rates and a reduction in the overall use of cancer services.

‘Some notable concerns raised with us, include the following – Cancer Research UK has reported that urgent referrals for diagnostic tests for suspected cancer have dropped by 75 per cent in England, despite national guidelines stating that urgent and essential cancer treatments must continue.’

Around 36,000 cancer operations had also been cancelled by mid-May in the UK, the report went on.

Meanwhile, at least eight million courses of dental treatment have been cancelled due to the pandemic.

The committee said it was calling for urgent action to assess and tackle the huge backlogs seen across the NHS.

Mr Hunt said the pandemic has ‘massively impacted normal NHS services, something that could have been mitigated with earlier infection control measures in hospitals and clearer communication to patients whose care was disrupted.

‘We’ve heard of severe disruption to services, especially cancer, and here we could be looking at tens of thousands avoidable deaths within a year.

‘If we’re to avoid this going forward, it is time to give as much priority to avoiding harm and death caused by the interruption of normal NHS services and introduce mass testing for all NHS staff.

‘Today we set out these and other steps the Government and NHS leaders must take to manage services through a second wave.’