Nicola Sturgeon has laid down the gauntlet to Boris Johnson as she seized on SNP election gains to demand a fresh referendum on Scottish independence.

But Mr Johnson and his new Tory majority government are dead set against allowing another breakaway ballot, with the two sides now set for an epic clash.

Ms Sturgeon has insisted the vote on splitting from the UK must now be allowed to take place before the end of next year.

But if Mr Johnson holds firm in his opposition to another vote Ms Sturgeon could be left frustrated with the UK likely heading towards a fresh constitutional crisis.

The SNP managed to increase its tally of MPs in Westminster from 35 in 2017 to 48 this time around as the party won the overwhelming majority of the 59 seats available north of the border.

But the Tories are likely to point to the fact that while the SNP secured 45 per cent of the vote in Scotland, a majority of Scots actually voted for unionist parties. 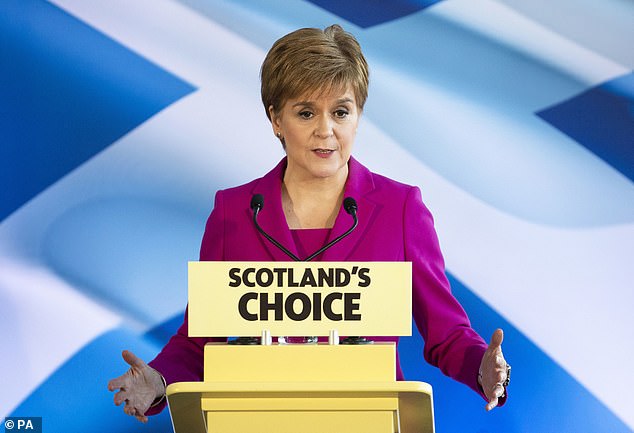 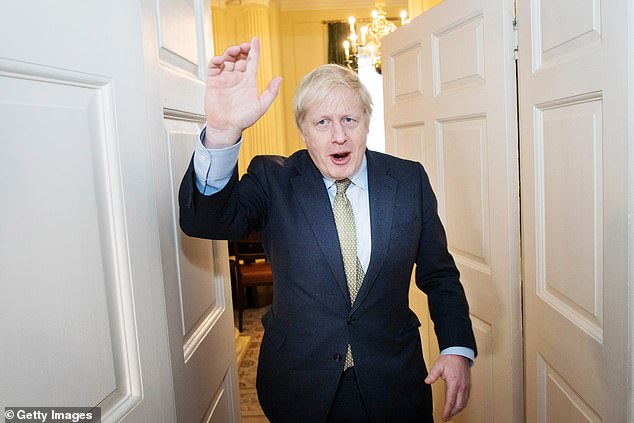 Boris Johnson, pictured arriving back at 10 Downing Street today after winning a Tory majority at the general election, is ardently against the holding of a second ballot on breaking up the UK

Ms Sturgeon said in the wake of the result that a second vote on Scottish independence is now a ‘democratic right’ because of her party’s ‘watershed’ performance.

The Scottish First minister said she intends to formally request the necessary powers from the UK government for Holyrood to hold a ballot.

Her administration will ‘publish the detailed democratic case for a transfer of power to enable a referendum to be put beyond legal challenge’.

Approval for the second vote ultimately rests with Mr Johnson and without his sign off Scotland will be unable to hold a referendum which carries legal weight.

The party could try a last resort option of holding a referendum without the blessing of the UK government but it would not be recognised in law and would likely have serious consequences for the organisers.

But Ms Sturgeon said last night’s ‘stunning’ result for the SNP ‘renews, reinforces and strengthens’ the mandate for a fresh vote on independence.

The SNP leader said: ‘This is not about asking Boris Johnson or any other Westminster politician for permission.

‘It is an assertion of the democratic right of the people of Scotland to determine their own future.’

Mr Johnson has already made clear he is not prepared to grant a so-called Section 30 order – which would transfer the power to Holyrood to hold a referendum.

But Ms Sturgeon said the Tories – who focused their election campaign north of the border on their opposition to a second independence vote – had suffered a ‘crushing defeat in Scotland’.

The Conservatives were left with six MPs in Scotland, after having won 13 seats two years ago.

Speaking at a press conference in Edinburgh, Ms Sturgeon said: ‘Given what I fear the Tory government has in store for Scotland, that right to choose our own future has never been more important.’ 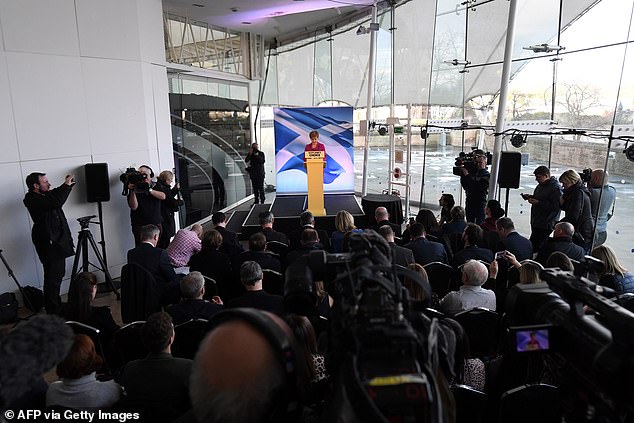 She told Mr Johnson directly: ‘Let me be clear. This is not simply a demand that I or the SNP are making.

‘It is the right of the people of Scotland – and you as the leader of a defeated party in Scotland have no right to stand in the way.’

In a sign that the Tories have no intention of acquiescing to Ms Sturgeon’s request for a referendum, Michael Gove said last night that the Tories remained opposed to another ballot.

Speaking after an exit poll had showed the SNP were surging while the Tories were on course for a massive majority, the senior Cabinet minister said: ‘I don’t believe that another independence referendum is inevitable, quite the opposite.

‘I don’t believe that a second independence referendum would be right for Scotland or right for the United Kingdom.’