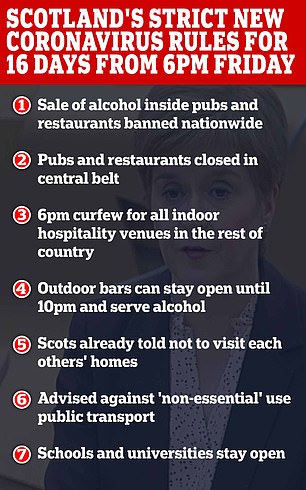 Scottish First Minister Nicola Sturgeon said indoor hospitality venues will only be allowed to operate between 6am and 6pm daily, selling food and non-alcoholic drinks only

Nicola Sturgeon tried to brush off criticism of her new coronavirus pub lockdown rules today as she insisted she had not lost control of the pandemic in Scotland.

The First Minister insisted that most business owners ‘know whether they’re a restaurant or a cafe’ amid confusion over rules which closed licensed premises for more than two weeks on Friday.

Pubs and restaurants across Scotland have been ordered to close by 6pm and not serve alcohol, with licensed premises in five Central Belt areas barred from opening at all.

But there was confusion over whether the rules applied to cafes, with an amendment rushed out on Friday allowing cafes with an alcohol licence to stay open – but not serve any alcohol.

Appearing on Sky’s Sophy Ridge on Sunday today, Ms Sturgeon said:  ‘I think most people know whether they’re a restaurant or a cafe…

‘What we’ve tried to do here is put in place restrictions that can have the effect you want them to have which is reducing the spread of the virus.

‘Now that means we have to reduce quite dramatically the volume of settings where people can come together and interact.

‘We’ve tried to do that but also build in a bit of flexibility because we want people –  particularly when we have household restrictions in place people cannot go into each others houses –  people who live alone to have somewhere they can go to meet a friend for a coffee. 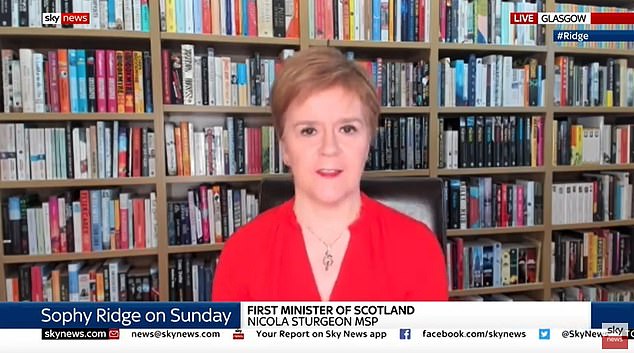 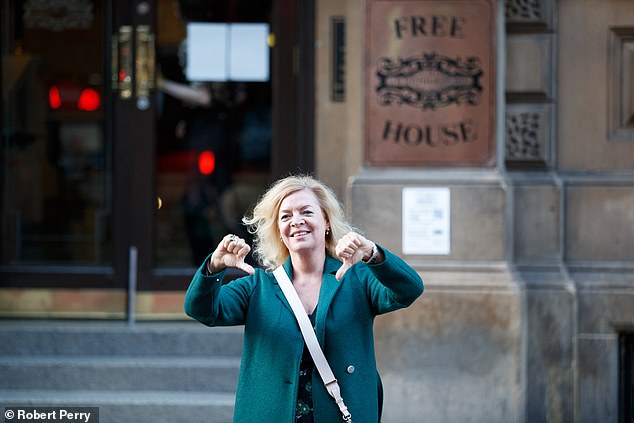 ‘So for social isolation reasons we allowed cafes to stay open, and we have given a bit of flexibility so that a cafe that just happens to have a licence but doesn’t really serve much alcohol can stay open rather than close.

‘We can be a lot more simple but that usually means being a lot harder.’

On Friday night Edinburgh’s hospitality industry descended on the Scottish Parliament in Holyrood as part of a protest against the new central belt restrictions on bars, pubs and restaurants.

Bartenders and owners dumped their now useless ice from their venues outside the building, representing the idea that their industry has been ‘frozen’ and ‘put on ice’.

Following new restrictions venues across the capital have been left with a surplus of ice for ‘drinks that will never be made’.

New restrictions introduced for Scotland’s pubs, bars, restaurants came into effect earlier today meaning venues across the country were only be allowed to operate indoors between 6am and 6pm but not serve alcohol.

Drinks can still be served until 10pm in outdoor areas but pubs and licensed restaurants in five health board areas across the central belt will be forced to close for 16 days as of this evening.

Establishments in Greater Glasgow and Clyde, Lanarkshire, Ayrshire and Arran, Lothian, and Forth Valley can only provide takeaways during this time with the temporary measures set to end on Sunday October 25.

Hospitality bosses described the decision as a ‘total catastrophe’ that will be the ‘final straw,’ for hundreds of venues. Sector chiefs said Ms Sturgeon had ‘effectively signed a death sentence for many businesses’ and said the ‘real problem’ was socialising at home.

The Scottish Licensed Trade Association told The Telegraph that more than two-thirds of pubs, bars and restaurants ‘could be mothballed or go under’, along with more than half the sector’s jobs.

When asked if she had lost control of the virus in Scotland, Ms Sturgeon told Sophy Ridge on Sky: ‘No, absolutely not, we’re working hard to make sure that doesn’t happen.’

The First Minister said that while the virus was ‘spreading a little bit faster’, the number of cases per 100,000 are the lowest in the four nations.

‘That is because over the summer we suppressed the virus… That doesn’t mean we can be complacent about it, or not take it very seriously.

‘It shows we were right to do that over the summer and I think we’re right now to act quickly and decisively to try and stop that increase in cases.’