Night-MARE! HORSES race along a motorway towards traffic

Night-MARE! Extraordinary moment HORSES race along a motorway forcing drivers heading in the opposite direction to take evasive action

This is the bizarre moment motorists are forced to swerve to avoid runaway horses galloping the wrong way up the motorway.

Drivers who could not believe their eyes had to pull into the hard shoulder as the animals bolted past in the fast lane.

Police said horses had strayed into both carriageways of the M606 on EasterSunday just outside Bradford in West Yorkshire.

It is believed they may have escaped from a farmer’s field near the busy motorway.

The alarm was raised just after 9am, leading to a two hour rescue operation in which cops moved traffic into the hard shoulder so the animals could be rounded up.

In the footage captured by a driver, the animals were running close together in single file as shocked drivers looked on. 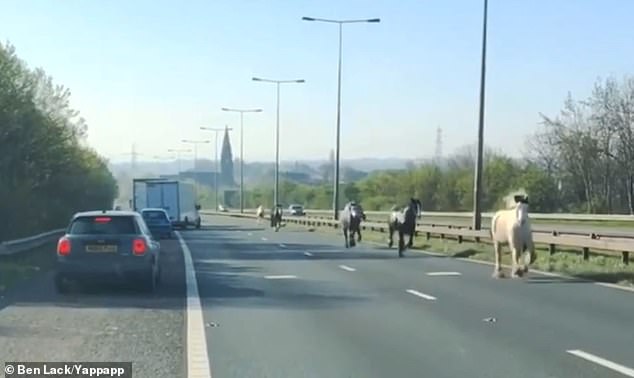 The runway horses are believed to have escaped from a nearby field, galloping the wrong way down the motorway one after the other

One driver said: ‘It was absolutely surreal. I was just driving along listening to the radio when I saw these shapes in the distance.

‘When I realised they were horses I just could not believe it. I joined the other drivers in the hard shoulder as one after the other galloped past.

‘They were totally oblivious to the danger and romped past as if they hadn’t a care in the world. It is amazing no one was killed.’ 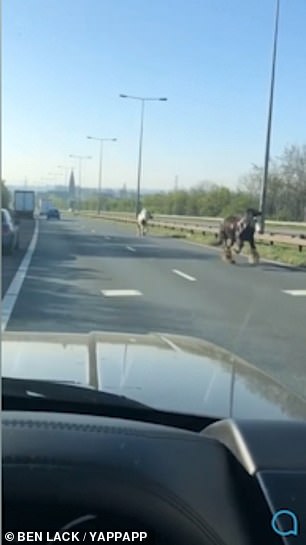 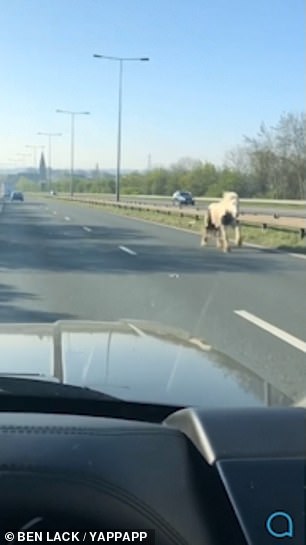 The alarm was raised at just after 9am when motorists were warned of ‘Horses on the Road’. At one stage, the Bank Holiday traffic was halted in both directions, leading to massive tailbacks for holiday makers.

Shortly after 11am, police had turned cowboy to round up the half a dozen strays and lead them to safety, allowing the astonished motorists to continue their holiday journeys.

A spokesman added: ‘There were several horses on the road and all traffic is being temporary held in both directions whilst they were moved to a safe location.All lanes have now reopened.’

It is understood that none of the animals were hurt and they were later reunited with their relieved owner.