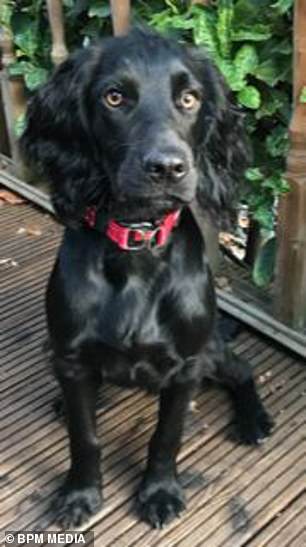 Nine-month-old Wilfred swallowed the black tar heroin, an impure form of the drug, when on a walk in the Habrough Woods, Grimsby

A nine-month-old puppy died in his owner’s arms just seconds after eating heroin dumped in woodland.

Cocker spaniel Wilfred swallowed the black tar heroin, an impure form of the drug, when on a walk in the Habrough Woods near Grimsby.

The cause of the dog’s death was only discovered after a post-mortem – and Humberside Police have since warned pet owners to ‘be vigilant’ when out on walks.

Owner Nick Dinsdale, from North Killingholme, said he was ‘totally devastated’ after watching the puppy die in his arms on Thursday.

He said: ‘We went down to the woods for a walk. Half way round he was just bouncing about, having fun.

‘We get to the middle of the woods. He came back towards me and I carried on walking.

‘I look about 30 feet back and he is sat down. I thought that was unusual. I could see something was seriously wrong.

‘Within 20 or 30 seconds he just keeled over. I thought has he got something stuck in his mouth. There was brown on his tongue.

‘He just died on me. He died in my arms. He died within a minute of me turning back after it happened.’

The 50-year-old and wife Gina, who bought Wilfred aged 8 weeks for £750, said the ‘disgusting incident’ left them unable to sleep. 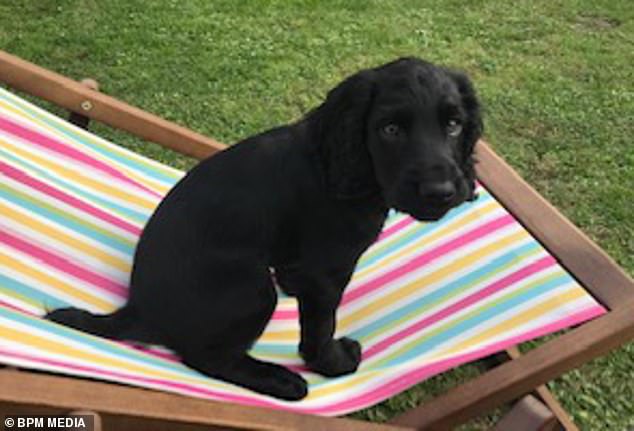 Mr Dinsdale then paid for a post-mortem which revealed the pup had ingested black tar heroin.

Jacqueline Buck, a veterinary surgeon from the Abbey Vet Centre, said: ‘We have performed a post-mortem on a nine month old spaniel puppy which died very suddenly on a walk.

‘He would appear to have been poisoned as a result of eating what appears to be black tar heroin while walking in Habrough Woods.

‘The police have been informed and they are investigating.

‘We feel that local people need to be made aware of this incident in the public interest because neither dogs nor children should be roaming the area free because of the danger to their life and health if they were to come into contact with similar illegal substances.’ 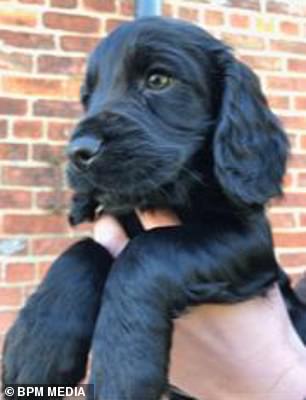 Dark in colour as a result of crude processing methods that leave behind impurities, black tar heroin can be injected and demand for it in South America has boomed in recent years.

A spokeswoman for Humberside Police said: ‘We are looking into reports of suspected drugs being left in the woods near Newsham Lane, Habrough following the death of a dog.

‘We were contacted by the dog’s owner yesterday after a vet confirmed that the dog’s death was caused by drugs.

‘The owner believed that the dog had eaten something suspicious on a walk in the park, causing it to become unwell.

‘We are looking into the report to ensure the safety of everyone in the area and would advise dog owners to be vigilant about what your dog is picking up when out on walks.

‘If you have any information that may assist our enquiries please get in touch by calling our non-emergency number 101 quoting log number 352 of 06/12/18 or Crimestoppers anonymously on 0800 555 111.’