No Santa in person? No problem for kids, with 2020 pivot to video

In 22 years of being a close friend of Santa, David Parsons has seen it all.

Kids who won’t stop crying. Kids who say "I don’t believe in you". Kids who want a pony.

He’s got a deft come-back for any curly issue. If they say "I don’t have a chimney" he’ll say "I’ll come through the heating duct". 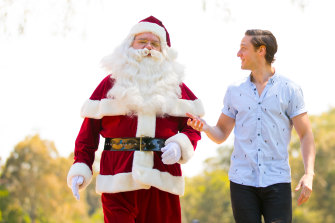 When the COVID-19 pandemic threatened to wipe out his entire 2020 Christmas calendar of live appearances, salvation came from theatre producer David Venn.

Mr Venn has come up with Christmas To You, one of a slew of outlets which have turned to video calls to connect Santa to families.

Christmas To You customers can choose from three "adventures", each lasting 10 minutes and ranging in price from $19 to $39.

Starting on November 14, the options range from a relaxed chat with Santa, to working with Santa to solve a problem he has with a trainee elf, to a semi-scripted but also interactive performance of Santa going through his list, including a song.

Mr Venn, whose business producing musicals such as Bring it On and The Wedding Singer is on hold, said Santa would know the names of participants, their ages, their interests and hobbies, and if they had special needs.

"It will be tailored prior so it’s much more personal than you’d get when you meet him in a shopping centre," he said.

"There’s a basic script structure and then from there, he’ll improvise according to what he’s getting from the audience.

"So if it’s a quiet group then Santa would start to do more of a performance because they’re not as engaged. But if they were very vocal kids, Santa would bounce off that the whole way through."

Mr Parsons, Santa’s chum, said video chats were a first for his Christmas gigs, but gaining children’s trust was still the key.

Another company, The Real Santa, usually provides Santas in real life, mostly to one-off events, but for the first time, is taking bookings for a virtual service.

It has four options, from a phone call from Santa to a pre-recorded personalised video, a video conference or a Santa party involving up to 100 screens at once.

Some retailers will go ahead with live Santas, albeit in modified form.

Westfield shopping centres in metropolitan Melbourne will offer photos with an on-site Santa from November 7, however families must sit 1.5 metres from Santa and photos will be "landscape" in shape.

A live Santa will appear at the City of Melbourne’s Christmas Festival Hub – location yet to be confirmed – from November 28, again with social-distancing measures in place.

"Kids will be able to chat to Santa as he tinkers away in his toy workshop and have a photo taken, but they won’t be close enough to give him a high-five," a council spokesperson said.

In need of some good news?

Stories that will brighten your outlook, delivered weekly to your inbox. Sign up now for our Greater Good newsletter that is launching soon. Sign up to The Age here; Sydney Morning Herald here; Brisbane Times here and WAtoday here.