‘None of us will live forever’: Queen invokes own mortality, urges world leaders to act for future generations

Glasgow: The Queen has delivered an emotionally charged and highly political call to arms to world leaders on climate change, invoking her own mortality to send a warning about the need to protect future generations.

In a pre-recorded speech to the COP26 climate summit, the 95-year-old monarch said politicians had an obligation to think beyond their own immediate priorities. 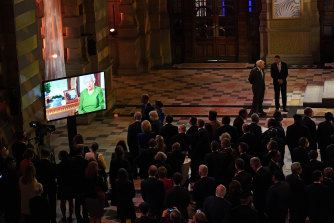 Queen Elizabeth II appears on a large screen makes a video message to attendees of an evening reception to mark the opening day of the COP26 summit.Credit:Getty

“It is the hope of many that the legacy of this summit – written in history books yet to be printed – will describe you as the leaders who did not pass up the opportunity; and that you answered the call of those future generations,” she said.

“That you left this conference as a community of nations with a determination, a desire, and a plan, to address the impact of climate change; and to recognise that the time for words has now moved to the time for action.

“Of course, the benefits of such actions will not be there to enjoy for all of us here today: none of us will live forever.

“But we are doing this not for ourselves but for our children and our children’s children, and those who will follow in their footsteps.”

The internationally respected monarch was due to speak at the summit in-person but had to pull out after doctors told her she needed to rest.

It is highly unusual for the Queen to address her own mortality in such a direct way and the comments will be interpreted as a subtle acknowledgment of her health issues, the seriousness of which remain unclear.

She delivered the address at her desk in Windsor Castle alongside a framed picture of her late husband Prince Philip, a lifelong environmentalist.

“I remember well that in 1969, he told an academic gathering, ‘If the world pollution situation is not critical at the moment, it is as certain as anything can be, that the situation will become increasingly intolerable within a very short time… If we fail to cope with this challenge, all the other problems will pale into insignificance’.

“It is a source of great pride to me that the leading role my husband played in encouraging people to protect our fragile planet lives on through the work of our eldest son Charles and his eldest son William. I could not be more proud of them.

"Indeed, I have drawn great comfort and inspiration from the relentless enthusiasm of people of all ages – especially the young – in calling for everyone to play their part.

"In the coming days, the world has the chance to join in the shared objective of creating a safer, stabler future for our people and for the planet on which we depend.

“None of us underestimates the challenges ahead; but history has shown that when nations come together in common cause, there is always room for hope. Working side by side, we have the ability to solve the most insurmountable problems and to triumph over the greatest of adversities.”

In a rare political statement, the Queen urged world leaders to step up during the fortnight-long Glasgow talks.

“For more than seventy years, I have been lucky to meet and to know many of the world’s great leaders. And I have perhaps come to understand a little about what made them special,” she said.

"It has sometimes been observed that what leaders do for their people today is government and politics. But what they do for the people of tomorrow – that is statesmanship.

"I, for one, hope that this conference will be one of those rare occasions where everyone will have the chance to rise above the politics of the moment, and achieve true statesmanship.”

“We have to put ourselves on what might be called a war-like footing,” Charles said. “We need a vast military-style campaign to marshal the strength of the global private sector, with trillions at its disposal.”