The father of a London teenager who was found dead in a Malaysia jungle says she didn’t have the stamina or instinct to survive there for days.

Sebastian Quoirin told an inquest he had visited the area where Nora Quoirin’s body was found, which involved driving out of the resort the family had stayed at and a further hour’s walk by a rocky stream with dense and slippery terrain.

He said: “I don’t believe she would have coped at all… she didn’t have a survival instinct. 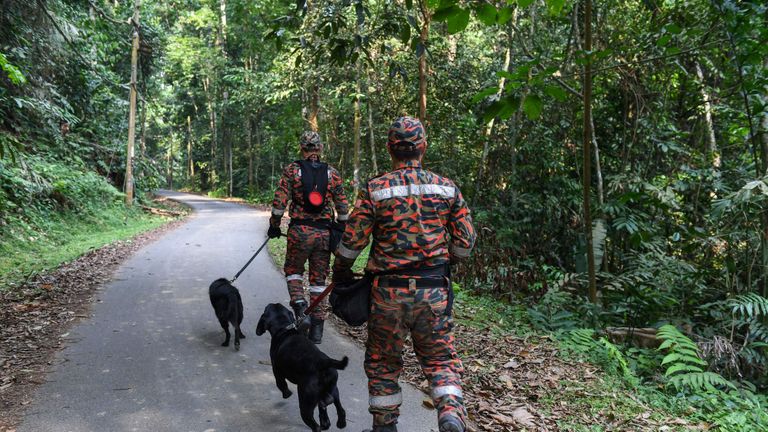 “I don’t believe Nora would have had the stamina or the strength to be on the move for… days. Nora would not know what to eat, she would be seriously dehydrated… she would be very weak.”

Frenchman Mr Quoirin also said the condition the 15-year-old’s body was found in didn’t support the theory she left the family cottage on her own and went on to walk and hide in a forest which police have put forward.

Speaking via video link from his home in London, he said Nora’s feet “didn’t seem to be particularly damaged” when he and his wife were asked to identify the body.

“I try to think how was it possible since the police told us Nora has been on the move. I am not an expert but to us, Nora’s body didn’t seem compatible of someone wandering off in the jungle, half naked without shoes,” he said.

He added that the teenager’s usual reaction when scared would be “freeze, look down and call for mummy or daddy”.

The French-Irish teenager disappeared a day after the family arrived for their holiday at the Duson eco-resort in southern Negeri Sembilan state on 4 August, last year.

She went missing from her family’s cottage and her body was found naked on 13 August, near a stream 1.6 miles away from the resort, following large search efforts.

Her family believe she had been abducted as she had mental and physical disabilities, and could not have left on her own.

Mr Quoirin also said it’s possible that abductors could have released her after learning about her handicap, the search operation and the media attention.

Police have told the inquest that there was no indication Nora had been abducted or sexually assaulted, and there were no signs of criminal activity.

Officers believe she climbed out a window on her own accord, with post-mortem evidence showing she died of intestinal bleeding as a result of starvation and stress.

The teenager’s Irish mother, Meabh Quoirin, told the inquest on Wednesday that it would have been near-impossible for Nora to open and climb out of a window.

She added that all the children had gone to sleep in just their underwear as it was a hot night.

The couple’s two younger children are scheduled to give evidence in private later this afternoon.

A British doctor who conducted a second post-mortem will also be providing evidence remotely later this month.

The Quoirin family have sued the resort owner for alleged negligence. Their lawsuit says there had been no security at the resort and that a broken latch had been found ajar on the morning of Nora’s disappearance.