London: Tens of thousands of North Korean women and girls – some as young as 9 – are being trafficked into sexual slavery in China as they try to flee poverty and oppression in their homeland, experts on the reclusive state said on Monday.

The sexual exploitation of North Koreans generates at least $US105 million ($153 million) in annual profits for the Chinese underworld, according to a report by the non-profit Korea Future Initiative, which includes harrowing accounts from trafficked women. 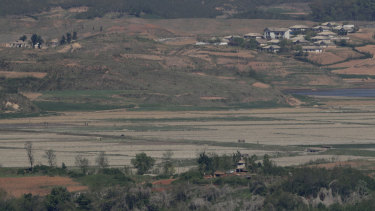 A new report details the extent to which North Koreans fleeing poverty are being trafficked into sexual slavery.Credit:AP

"Victims are prostituted for as little as 30 Chinese yuan ($6.30), sold as wives for just 1,000 yuan, and trafficked into cybersex dens for exploitation by a global online audience," the report's author Yoon Hee-soon said.

"Many are sold more than once and are forced into at least one form of sexual slavery within a year of leaving their homeland."

An estimated 60 per cent of North Korean girls and women in China are trafficked into the sex trade, according to the report, launched at an event at Britain's Parliament.

Nearly half are pressed into prostitution, about a third sold into marriage and most others pushed into cybersex, researchers said.

No one at the Chinese embassy in London was immediately available for comment. Gathering information in North Korea is notoriously difficult.

Many North Koreans are enslaved in brothels in districts in north-east China with large migrant worker populations, the report said.

Trafficking survivors said prostitutes further south, in Shanghai, were branded with tattoos such as lions and butterflies to show ownership and deter abductions by rivals.

Girls and women enslaved in cybersex dens are usually aged between 12 and 29 but are sometimes younger, the report said.

They are forced to perform sex acts or sexually assaulted in front of webcams. A live-stream featuring a young girl can cost $110, researchers said, adding that many subscribers appeared to be South Korean.

One woman, referred to as Ms Choi, told how she was taken to an apartment where she was shocked to see pre-pubescent girls.

"[There] was a bed in front of a table with a computer and webcam. Four men … gang raped me. When the third man began raping me [I] was bleeding … I cannot remember any more."

The report said women forced into marriage were mostly sold in rural areas for 1,000 to 50,000 yuan, and were raped and abused by their husbands.

Estimates of the number of North Koreans in China vary between 50,000 and 200,000. China's policy of detaining and repatriating North Koreans forces them to live in the shadows, placing them at high risk of exploitation, Yoon said.

Some are sold by policemen after arrest, while others are duped by traffickers offering to get them to countries where they can claim asylum, the report said. Abductions are also common.

He said the trafficking of North Korean women was tied to China's one-child policy, which has distorted the country's gender balance due to the preference for boys.

One trafficking survivor, who was repatriated three times before finally escaping to South Korea, told the launch event how pregnant women sent back to North Korea were forced to undergo abortions.

The woman said she was sent to a concentration camp where a doctor ripped her baby from her body – without anaesthetic – and tore him limb from limb.