Northumberland bus driver ploughs into the back of a stationary bus

Passengers are sent flying as van driver, 22, high on cocaine ploughs into the back of a stationary bus

Disturbing CCTV footage shows the moment a white van driver who was high on cocaine and anxiety medication crashes into a bus sending passengers flying.

Passengers are seen tumbling to the floor when the van hits the parked bus from the rear.

The video also shows an elderly man smashing his head on a metal pole. 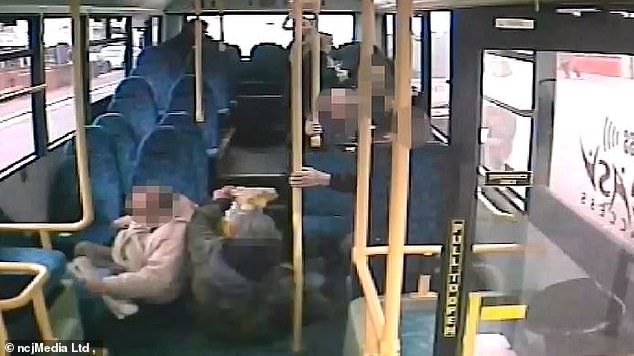 Passengers are sent flying as a white van ploughs into the back of a stationary bus. An elderly man hit his head on a metal pole but no one was seriously injured

Corey Rennison admitted to driving with cocaine and diazepam in his system.

The 22-year-old, from Stakeford, was on his way back from McDonald’s in his dad’s van when he hit the bus that was parked in a bus stop occurred shortly before 11am.

Rennison, who has no previous convictions, didn’t see the bus when he crashed and mounted the pavement in the process.

Defending, Graham Crouth said: ‘My client tells me that when he was heading towards the bus he was looking down at an air vent and looked up and saw the bus. 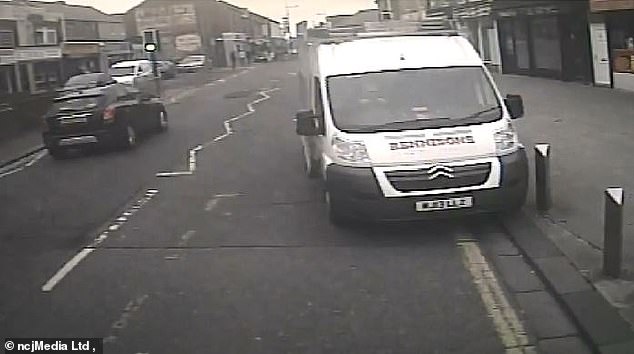 Corey Rennison, 22, admitted to driving with cocaine and diazepam in his system at the time of the collision. Rennison was driving his dad’s white van (pictured)

‘By that time he was only about two meters short of the bus and there was nothing he could do.

‘Northumbria Police have confirmed that no body received serious injuries as a consequence and insurance has already been paid out.

‘There was not a high level of pedestrians or traffic in the street at the time.’

He was charged with two counts of driving under the influence of drugs.

Rennison has been ordered to return to court on August 9 to be sentenced.