The variant of COVID-19 detected in India is no terrifying “double mutant”, scientists say, but it is a sign of how outbreaks anywhere in the world continue to pose a serious threat to Australia.

India is in the middle of a pandemic surge and recorded the world’s highest daily total of COVID-19 infections, 332,730, on Friday, beating a record the country set the day before. Nations around the world have banned flights, while New Delhi has turned to mass cremations in car parks to deal with the city’s mounting dead. 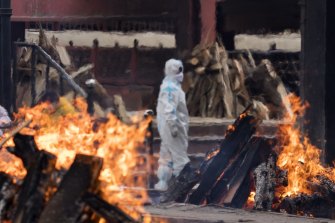 A man wearing PPE farewells a relative who died of the Covid-19 coronavirus disease at a crematorium in New Delhi this week.Credit:Getty

Amid the unfolding disaster, attention has focused on a variant first spotted in India in October known as B.1.617, which some newspapers have labelled a ‘double mutant’, as it possesses at least two important changes in its genetic code.

British health authorities have tracked a sharp increase in cases of B.1.617 detected there since late March. Cases have been reported in 14 other countries, including at least eight cases in Australia.

Preliminary evidence suggests B.1.617 possesses mutations that both increase its contagiousness and cut the effectiveness of antibodies.

But it remains unclear what role, if any, it is playing in fuelling India’s pandemic – and scientists emphasised the same measures that have stopped other variants of COVID-19 would also work on it.

“It’s not a super-scary thing that is completely different to what we have been dealing with,” said Megan Steain, a virologist at the University of Sydney.

“All these variants can still be stopped using all the non-pharmaceutical interventions we have all become used to over the last 18 months. Physical distancing will be able to stop the spread of these variants.”

SARS-CoV-2, the virus that causes COVID-19, accumulates mutations at a slow but regular pace; by now, more than a year into the pandemic, versions of the “original” virus that emerged from Wuhan are almost never detected.

“To call B.1.617 a double-mutant is incorrect, because it contains more than two mutations – as do all these variants,” said Dr Steain.

Take P.1, the variant first spotted in Brazil. It has 17 unique mutations.

B.1.617 has several mutations scientists have seen in other variants.

Two, L452R and E484Q, appear to substantially decrease the effectiveness of antibodies. L452R, and a third mutation the virus carries, are thought to increase the virus’s ability to infect cells.

India’s health ministry in March said there was no strong evidence showing variants were driving the country’s virus surge. But India does not really know, as the country’s genomic testing capacity is limited.

“What you have to remember is India was always going to be a disaster for COVID, no matter what the government did. You have people living in high density areas who cannot stay home – if you say ‘stay home’, people aren’t getting fed,” said Dr Kirsty Short, a virologist at the University of Queensland.

But the emergence of the variant highlighted the importance of controlling COVID-19 in other countries, experts said, as out-of-control outbreaks were breeding grounds for viral variants.

“The more it is allowed to spread, the more chance there is these new variants will emerge. And the virus could hit on a particular combination that is really bad at some point,” said Dr Steain.

“It’s not just our vaccination rates. We need to make sure all these other countries across the globe can get their vaccine coverage up.”