Smoke filled the skies of the French capital on Monday evening after the Notre Dame Cathedral was devastated by a huge fire. The iconic spire and a large part of the cathedral’s roof was destroyed by the blaze as firefighters rushed to try to contain the fire at around 6pm local time. Speaking on Good Morning Britain, author Ken Follett questioned the speed of the inferno which struck the 850-year-old Gothic masterpiece.

“Yet, a friend of mine saw the first smoke just before 7pm and she said that by 7.30pm it was a conflagration.

“That is very fast. So there’s something else going on.”

He added: “What happens, those rafters burn and then the roof collapses. 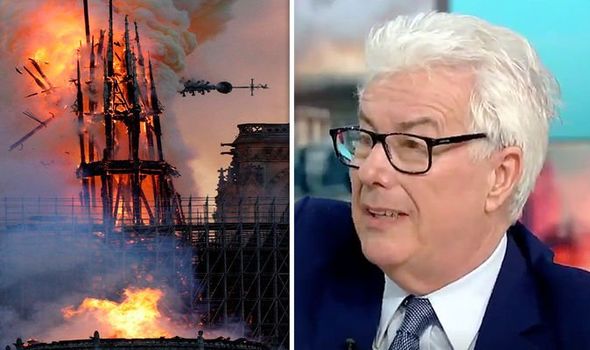 “The roof of Notre Dame was made of lead tiles, the timbers burn and collapse. The roof falls down.

“All of that debris falls on top of the vaulting. You’ll remember standing inside the cathedral the wonderful curved ceiling, we call it vaulting.

“That is made of thin stones malted together, so the debris from the roof falls on that, crashes that.

“All of that – hundreds of tonnes of wood and lead and stone and falls into the body of the cathedral and it destroys the pillars.”

The huge fire burned for eight hours and was largely extinguished in the early hours of Tuesday morning.

Mr Macron said France would launch a campaign to rebuild the historic building which is considered to be among the finest examples of French Gothic cathedral architecture.

He said: “We will rebuild it together. It will undoubtedly be part of French destiny and our project for the years to come.”

The cause of the fire at Paris’ landmark Notre Dame Cathedral is still not known and authorities are continuing their probe into how it started, French junior interior minister Laurent Nunez said on Tuesday.

“The fire is under control but not totally extinguished,” Nunez told a news conference just outside Notre-Dame.

Prime Minister Theresa May sent her wishes to the French capital from her walking holiday with her husband in Wales, where she is spending the beginning of parliamentary recess.

She said: “My thoughts are with the people of France tonight and with the emergency services who are fighting the terrible blaze at Notre Dame cathedral.”