Paris fire brigade has released footage of the roaring blaze that engulfed the spire and roof of Notre Dame Cathedral on Monday night. The shocking video shows the Paris Fire Brigade working to clear the blaze working its way through the cathedral. Firefighters can be seen using a crane in an attempt to douse the fire. An aerial view also captures the extent of the damage to the cathedral’s roof, which collapsed along with the spire.

The inferno broke out around 6.30pm local time (5.30pm BST), was declared under control some nine hours after it started, and fully extinguished around 10am (9am BST) on Tuesday morning.

Officials said there is no sign of arson and the fire was most likely just a horrible accident.

A firefighter and two policemen were lightly injured while tackling the blaze.

Firefighters managed to save the 850-year-old Gothic building’s main stone structure, including its two towers, but the spire and roof collapsed. 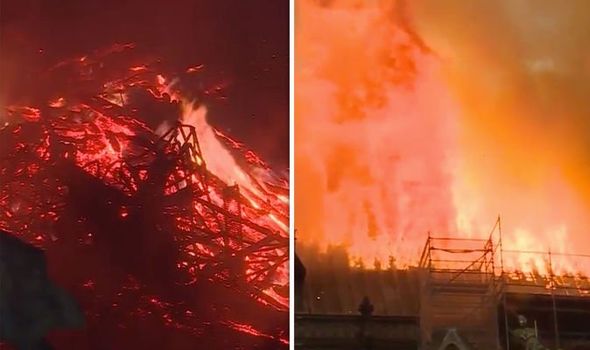 The European election campaign of French President Emmanuel Macron is being suspended for now following the cathedral fire, said French politician Nathalie Loiseau, who is spearheading the campaign.

Nathalie Loiseau wrote on Twitter: ”We are all going through a moment of extreme sadness. The ‘Renaissance’ list is understandably part of this moment of national unity. We are therefore suspending the campaign until further notice.”

President Macron’s ruling LREM party has put up candidates for the EU election under a list called ‘Renaissance’.

An Élysée spokesman said the French president will “express himself in due time”.

The spokesman said: ”We must respect this time of recollection and have the responsibility that this moment of great national emotion requires.”

The spokesman added the Council of Ministers will be totally dedicated to the aftermath of the fire.

Queen Elizabeth has sent a message to the President of France saying she was “deeply saddened to see the images of the fire which has engulfed Notre-Dame Cathedral”.

Paris’ deputy mayor said Notre Dame’s organ, one of the biggest and most famous in the world, remains intact after the fire.

Emmanuel Gregoire told BFMTV that a plan to protect the cathedral’s treasures had been rapidly and successfully activated.

The organ dates to the 1730s and was constructed by Francois Thierry. It boasts an estimated 8,000 pipes.

Mr Gregoire also described “enormous relief” at the salvaging of pieces such as the purported Crown of Christ.

France’s culture minister, Franck Riester, said artworks remaining in Notre Dame will be moved to the Louvre museum for safekeeping.