Number of Britons ill with Covid at 'highest level since JANUARY'

Number of Britons falling ill with Covid every day is now at ‘highest level since JANUARY’: Cases rose by 14% last week to 66,000, symptom-tracking app claims

The number of Britons falling ill with Covid jumped by nearly 14 per cent last week up to their highest level since January, according to a symptom-tracking study.

King’s College London scientists estimated 66,033 people were getting infected every day in the week ending October 2, up 13.6 per cent from 58,126 the week before.

Cases in children appear to be turning a corner but are still extremely high, with around one in 30 school pupils contracting the virus.

Professor Tim Spector, the epidemiologist who leads the study, said allowing Covid to ‘run rampant among them is a real gamble’.

The rising figures come despite Government data showing positive tests were still falling last week, with official cases only picking up for the first time in six days yesterday. 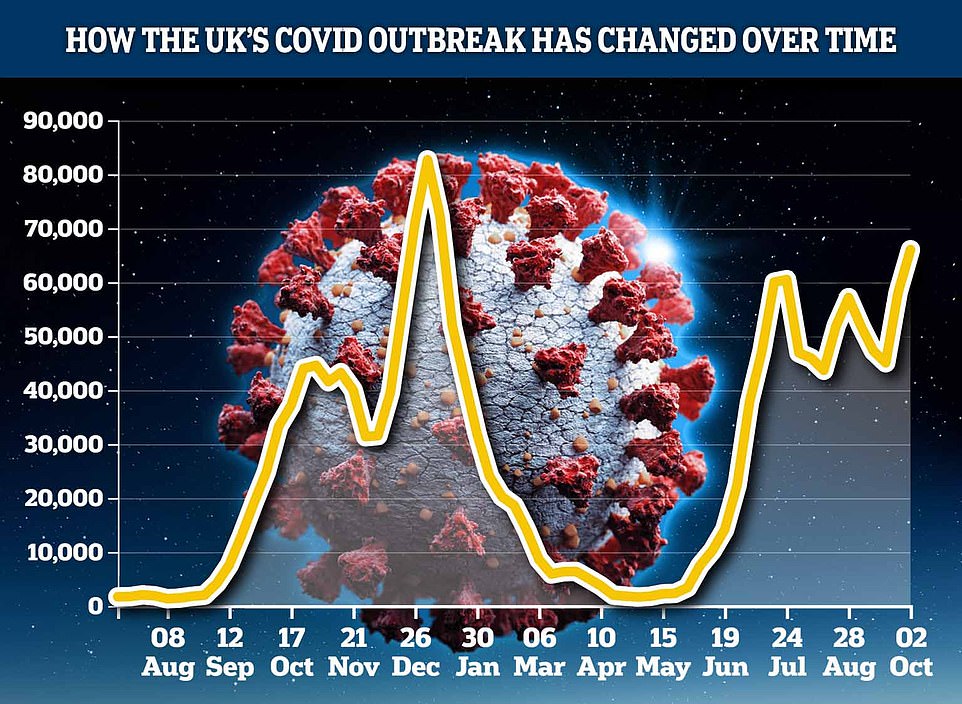 The number of Britons falling ill with Covid jumped by nearly 14 per cent last week up to their highest level since January, according to a symptom-tracking study 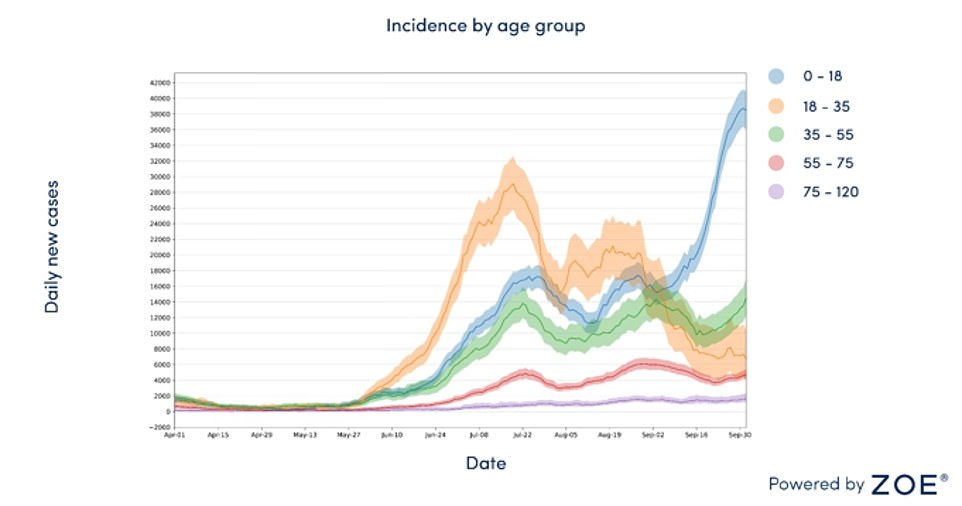 the number of daily new cases is continuing to rise quickly in under-19s and are rising in the 30- to 49-year-old age group, but at a slower rate

All regions but Scotland, are currently experiencing a rise in cases, particularly the Midlands. Cases are falling in Scotland

The  ZOE Covid Study incidence figures are based on reports from around 750,000 thousand weekly contributors and the proportion of newly symptomatic users who have received positive swab tests.

The latest survey figures were based on data from 44,958 recent swab tests done between September 18 and October 2.

They show the number of daily new cases was continuing to rise quickly in under-19s but may just be reaching a peak. They are rising in the 30- to 49-year-old age group, but at a slower rate.

Cases were low and stable in people over the age of 50. It is estimated one in 30 children aged between 10 and 19 currently have Covid.

All regions except Scotland are currently experiencing a rise in cases, particularly the Midlands. Cases are falling in Scotland.

Professor Spector said: ‘While Covid may be less severe in children, allowing Covid to run rampant among them is a real gamble.

‘With more than one in 30 older school-children now infected and as we predicted numbers rising, many will not escape long-term symptoms.

‘These are the highest rates since January 2021. Without vaccination or restrictions in this group, we can only hope that some kind of herd immunity will kick in and cases will drop.

He continued: ‘The good news this week is our latest research shows having a natural Covid infection before double vaccination means greater protection.

‘This is really positive news for overall immunity levels in the UK and means that large numbers of people will have effective and long lasting protection from Covid.

‘The evidence supports the need for vaccination, even for those who have already had Covid.

‘We need to be less complacent and without restrictions much more focus needs to be put on getting everyone vaccinated before winter to keep up with other countries’ efforts.’

Department of Health data yesterday revealed Covid hospitalisations increased 1.1 per cent to 666 on Saturday, the latest date data is available for.

It was the first time in 20 days the number of daily admissions had increased week-on-week.

But the number of people dying within 28 days of a positive test has continued to fall, with 143 fatalities recorded today.

Deaths were down 4.7 per cent on the 150 recorded last Wednesday, marking the twelfth day in a row the number of victims fell week-on-week.