Final salute to a hero: NYPD arrive by the thousands to honor fallen cop who was gunned down in cold blood – along with his rookie partner – in Harlem

Police officers arrived by the thousands in their finest dress blues on Friday, as a light snow drifted under an overcast sky, to honor their murdered brother Officer Jason Rivera – during the first of two funerals that again brought sorrow to the New York Police Department.

Later, the bag pipes played outside St. Patrick’s Cathedral, as Rivera, 22, was given a final salute along Fifth Avenue.

A week ago, Rivera and a partner, Officer Wilbert Mora, were fatally wounded on January 21 by a career criminal who ambushed them in a hallway as they responded to a family dispute in Harlem. Mora’s funeral is being held next week, also at St. Patrick’s.

Roman Catholic Cardinal Timothy Dolan presided over Rivera’s service, held in Spanish and English in recognition of his Dominican heritage. Many of the city´s top leaders were attending, including Mayor Eric Adams, Senator Chuck Schumer and Governor Kathy Hochul.

Adams, himself a retired police captain, told those gathered that he saw an echo of himself in the slain officer who had joined a department he had seen as flawed in hopes of improving it.

‘He did it for the right reasons — he wanted to make a difference,’ said Adams.

He went on: ‘there were days when I felt the public did not understand and appreciate the job we were [doing], and I want to tell you officers: They do. They do. These two fine men watered the tree of safety that allows us to sit under the shade from the hot sun of violence.’ 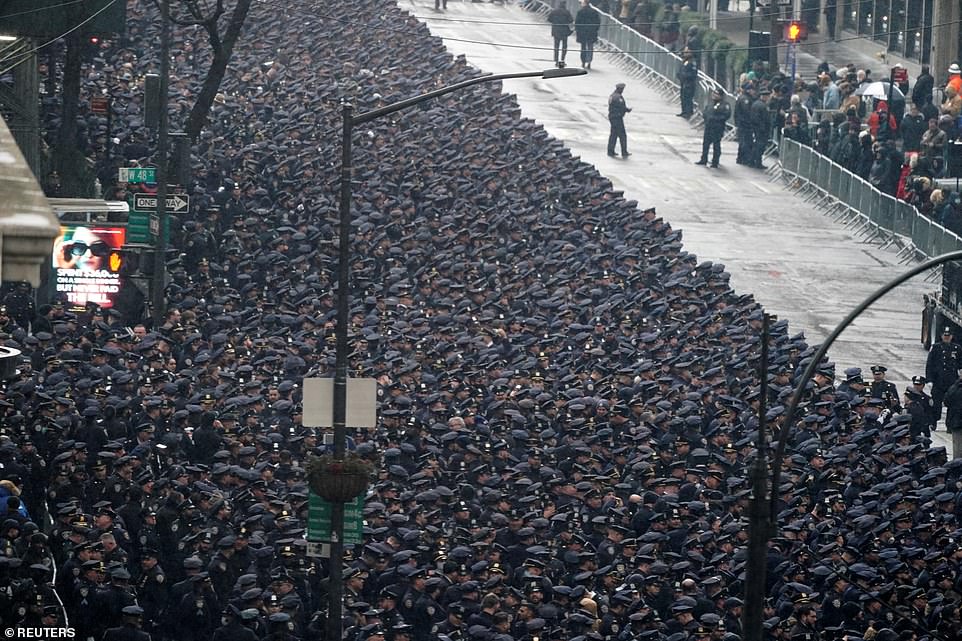 A sea of officers are standing shoulder to shoulder outside St Patrick’s Cathedral on a snowy Friday morning in Manhattan to honor their fallen brother, Officer Jason Rivera 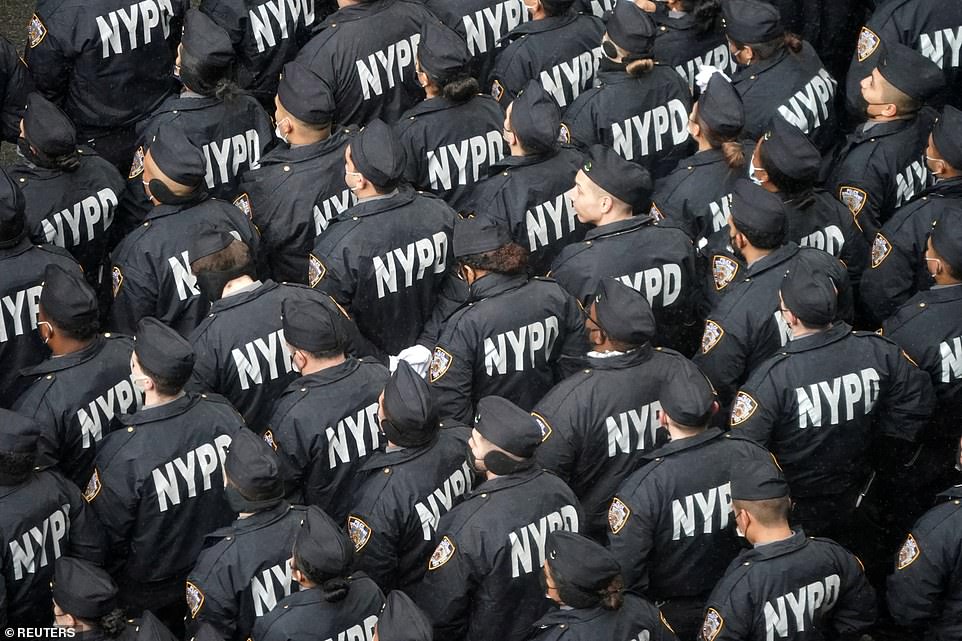 Members of the NYPD were out in full force to salute one of their own. Rivera and Wilbert Mora became the first officers to be killed in the line of duty by a gunman since 2017 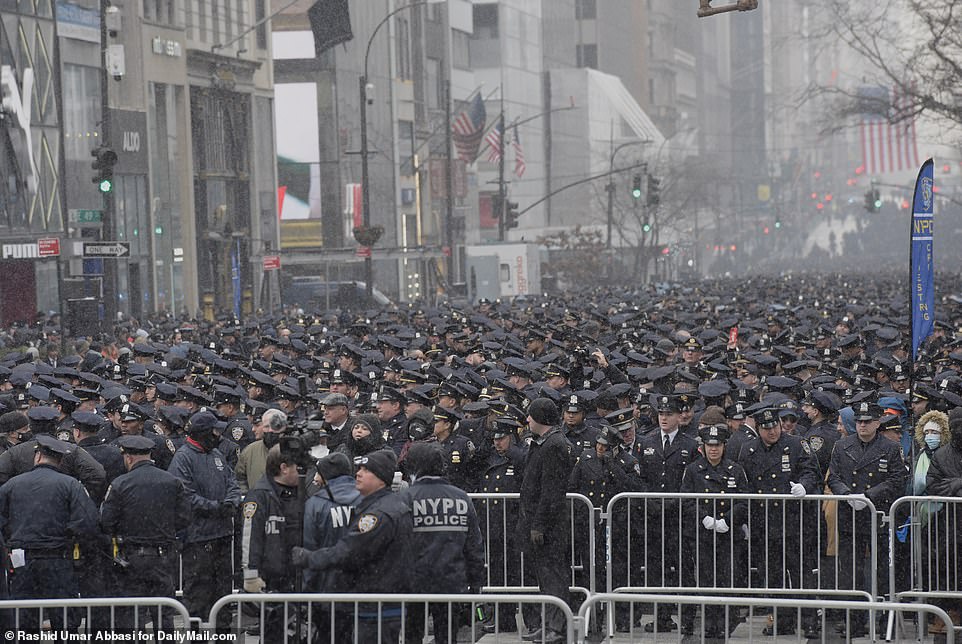 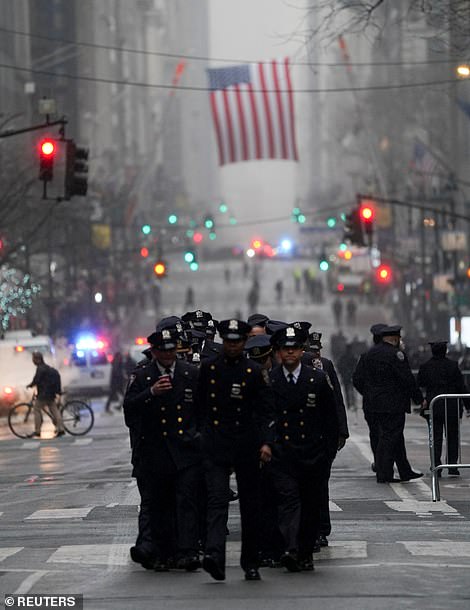 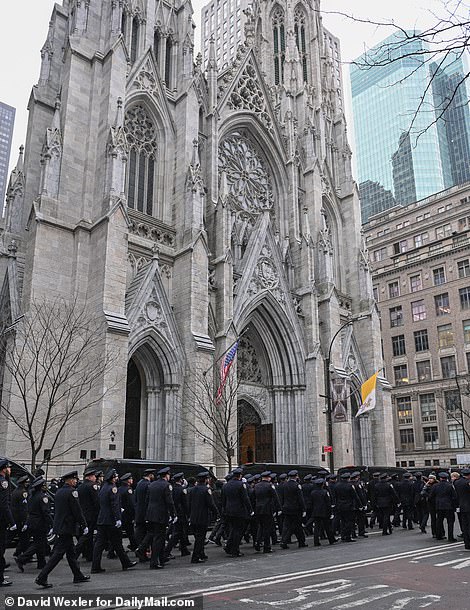 Members of New York Police Department arrive to attend the funeral service, a week after Rivera and his partner, Wilbert Mora, were fatally shot in the line of duty 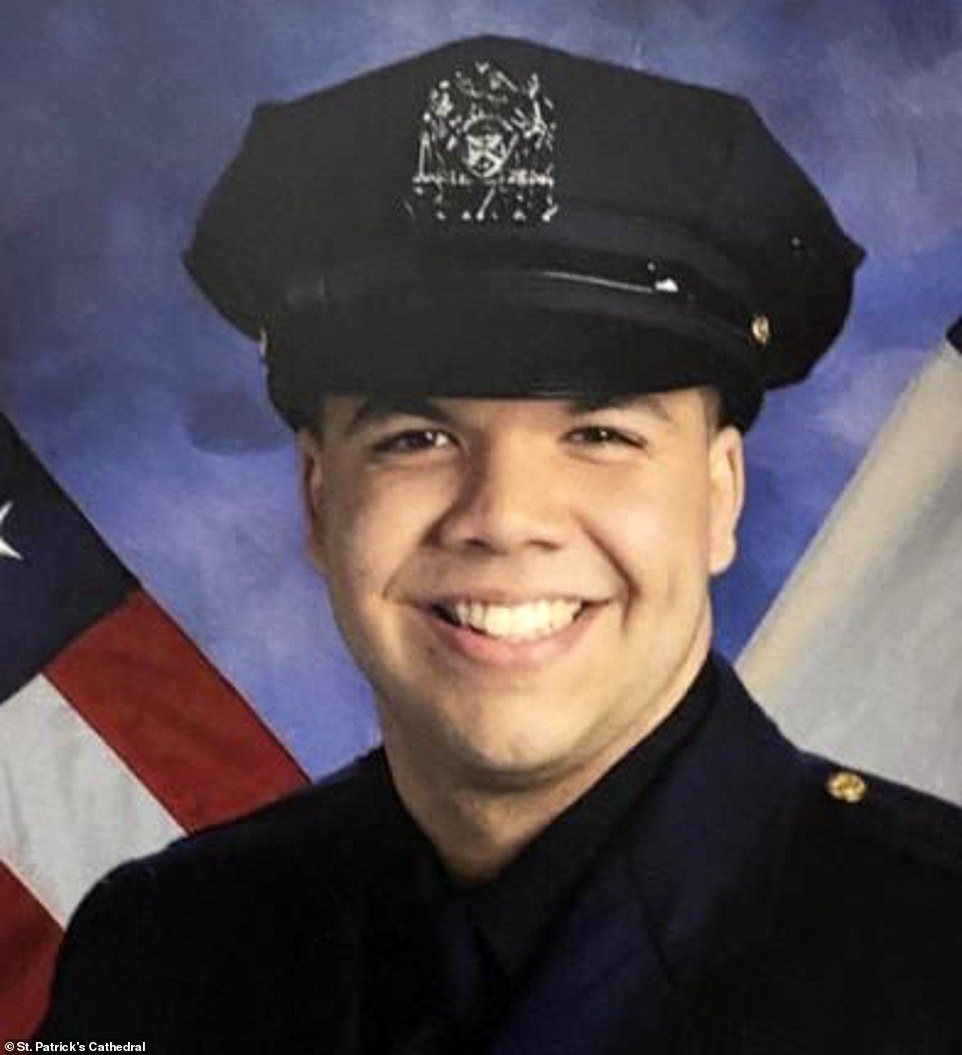 Officer Jason Rivera, 22, was a rookie cop who had been on the force in New York City for less than a year 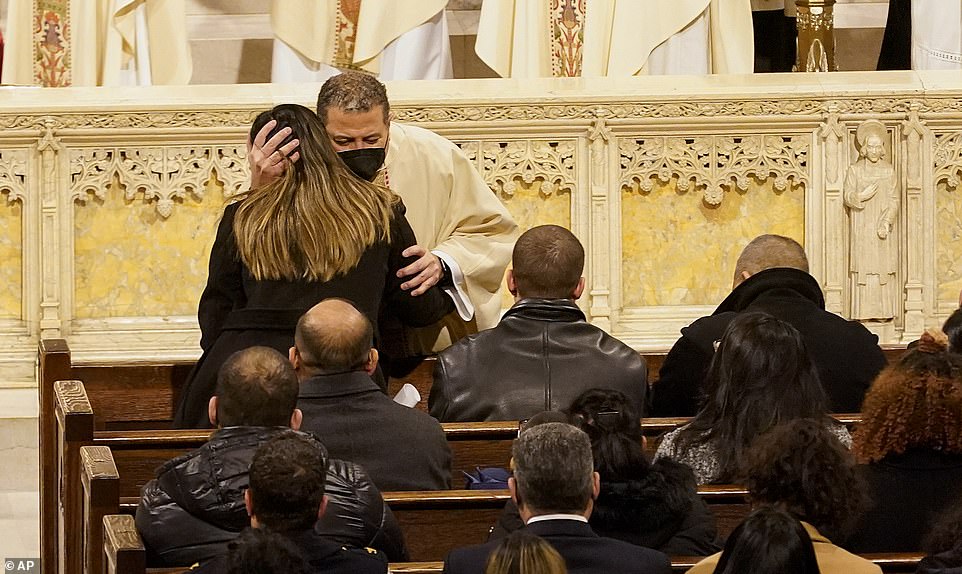 A pries hugs Dominique Rivera, the widow of Jason Rivera. In a touching tribute on Thursday, the 22-year-old woman called her husband of just three months her ‘sweet angel’ 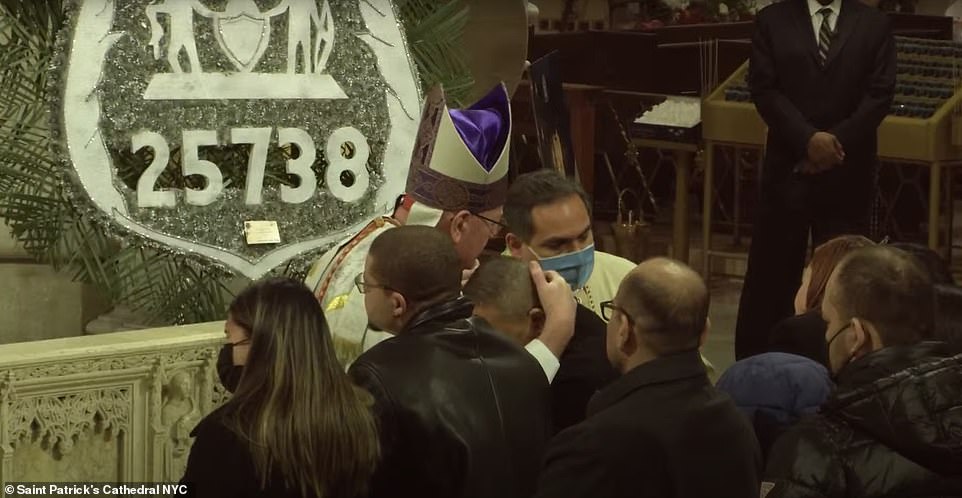 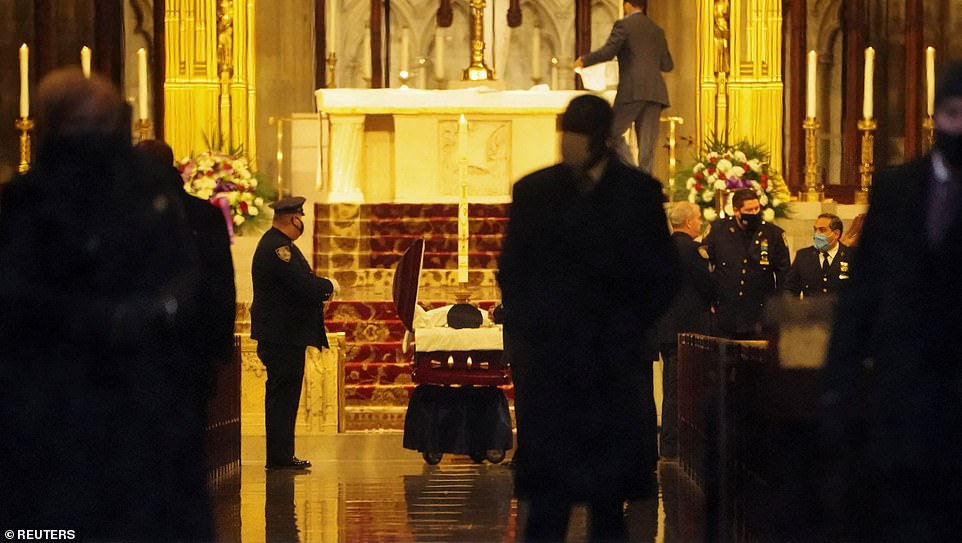 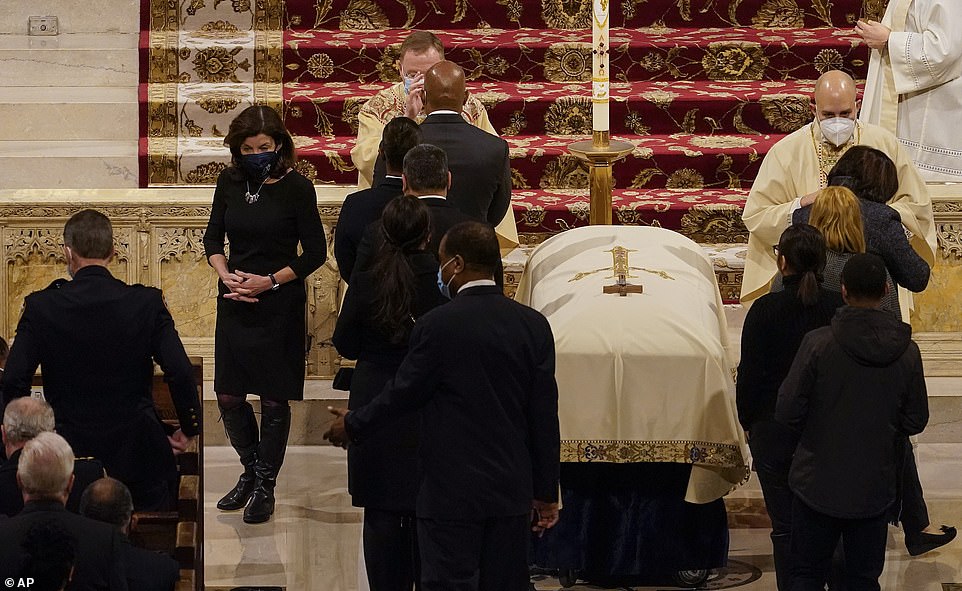 New York Gov. Kathy Hochul, left, walks back to her seat during the funeral. She said flags at state buildings would fly at half-staff from sunrise the day of Rivera’s funeral until sunset the day of Mora’s funeral on Wednesday 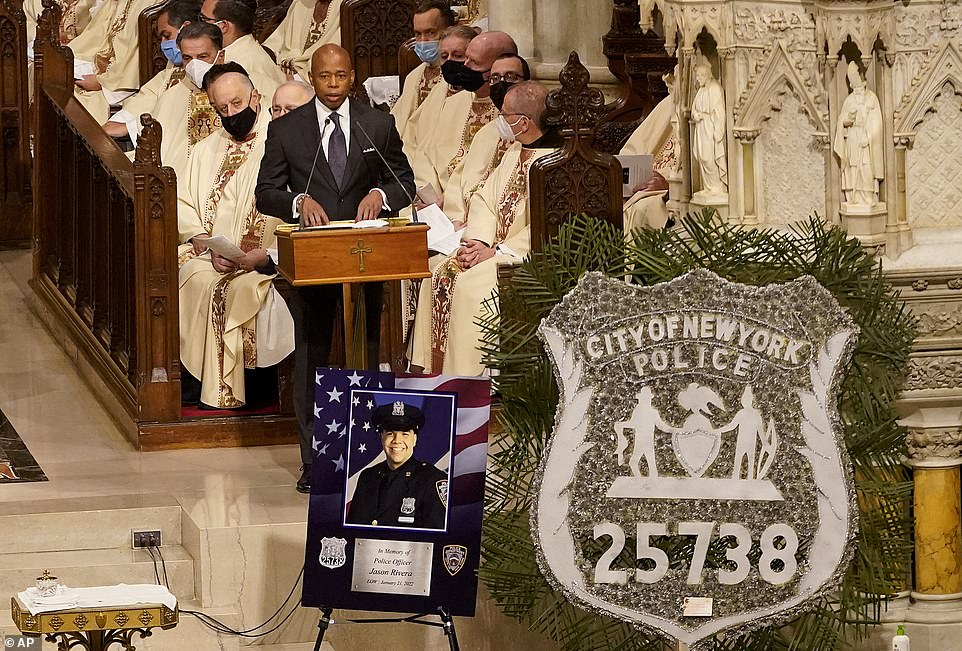 New York City Mayor Eric Adams, a former police detective who was voted into office after promising to crack down on gun violence, addresses mourners during Rivera’s funeral 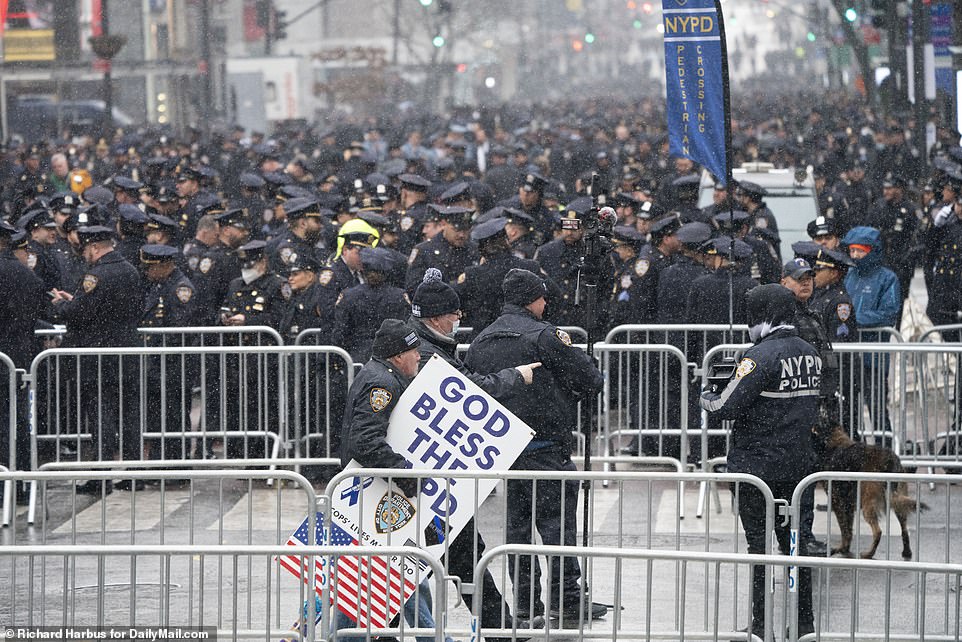 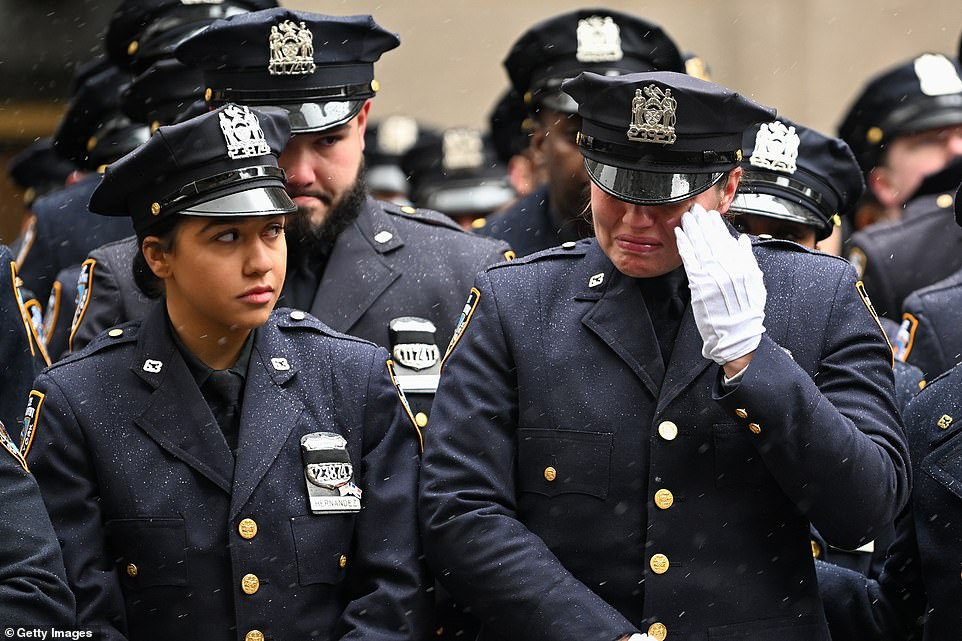 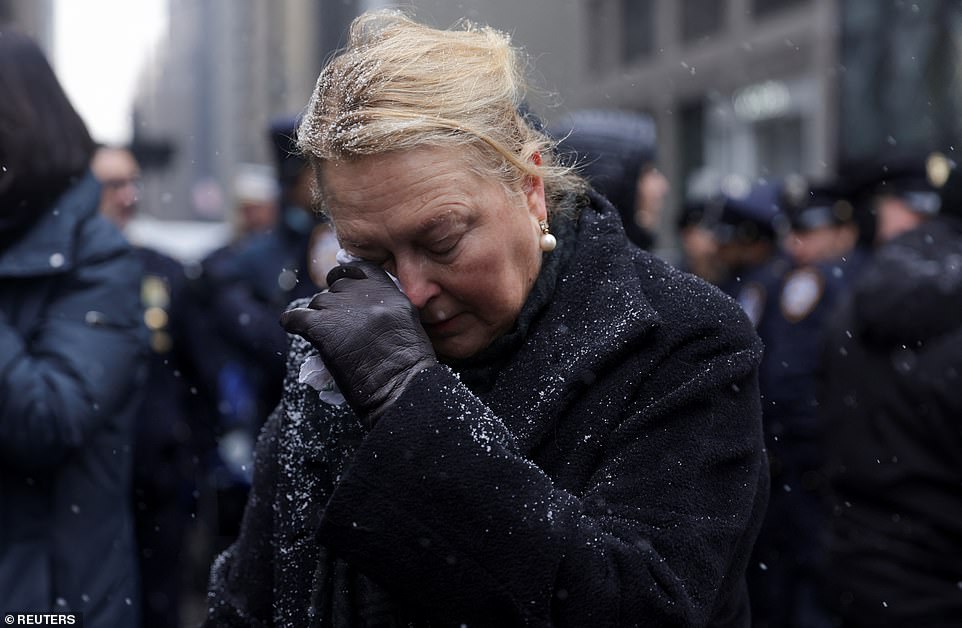 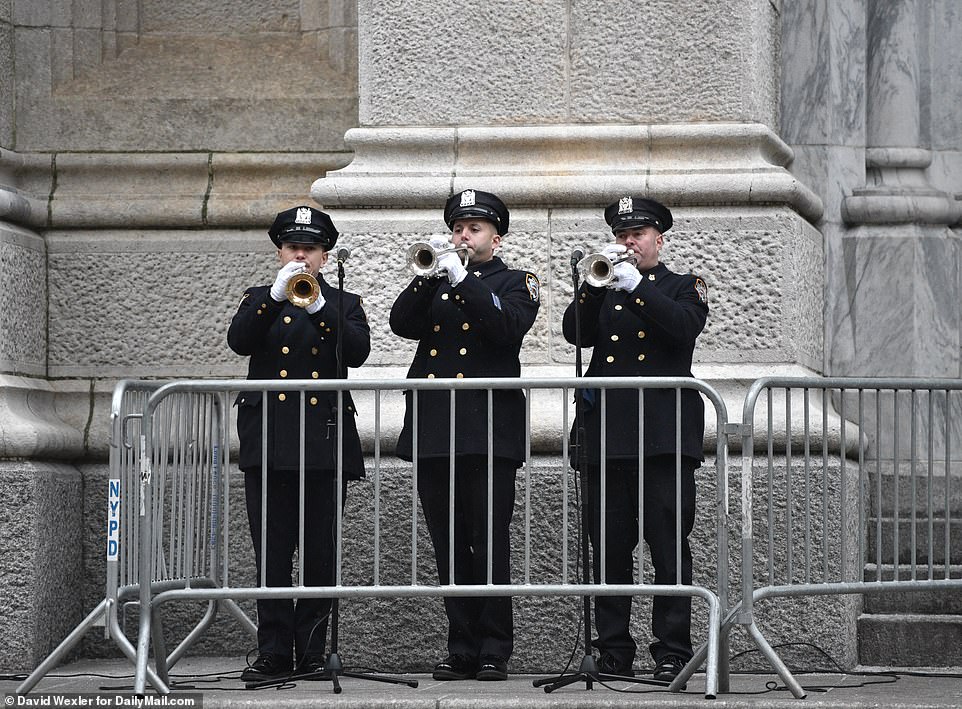 Taps is performed by a trio of NYPD officers outside St. Patrick’s Cathedral in honor of Rivera 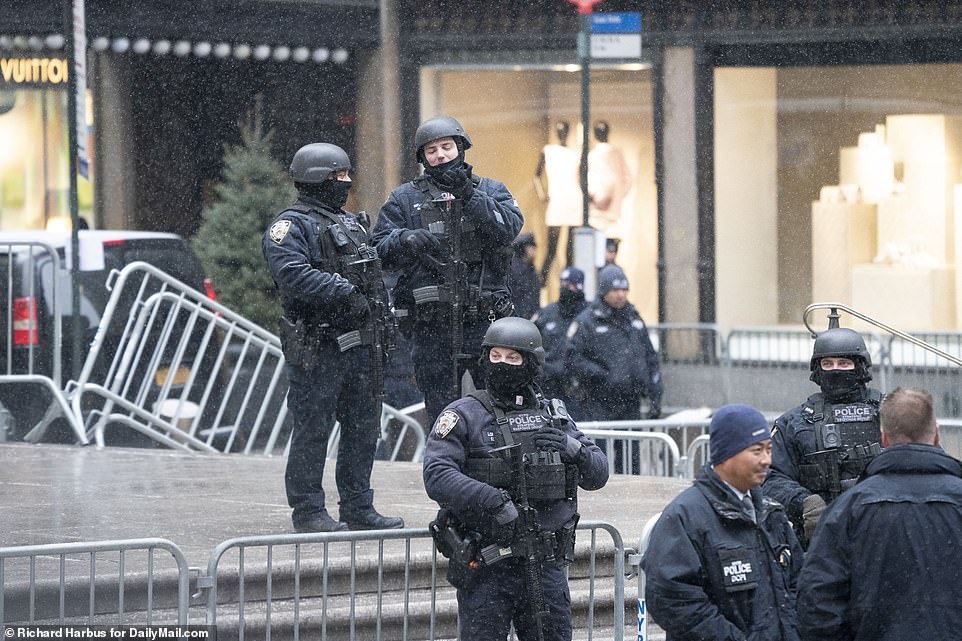 Hochul, a Democrat, said flags at state buildings would fly at half-staff from sunrise the day of Rivera’s funeral until sunset the day of Mora’s funeral on Wednesday. 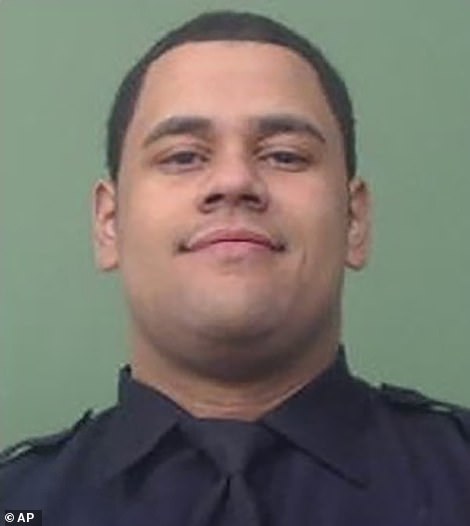 Rivera’s partner, Wilbert Mora, 27, died of his injuries on Tuesday. His wake and funeral will take place at St Patrick’s Cathedral next week

The officers came from near and far to honor Rivera, who, at age 22, was recently married and barely into his second year of service on the force.

‘It doesn’t really matter what uniform we wear,’ said Master Police Officer Tammy Russel. ‘We’re from Fairfax County, Virginia, but we’re here in New York City. These are all our brothers and sisters. … Sadness all around.’

Over the years, more than 500 New York police officers have died in gunfire, according to the Officer Down Memorial Page.

‘It’s an emotional time,’ said retired NYPD Officer Sean Flanagan, who played the bagpipes outside the cathedral. ‘We honor our own, we take care of our own.’

On Thursday, ordinary citizens joined thousands of uniformed officers at the cathedral for Rivera’s wake.

Patty Marsibilio, 61, traveled an hour by subway from the Bronx to pay her respects and pray for the safety of other New York City police officers.

‘This is something that was so terrible,’ she said. ‘He was 22 years old, married not even four months.’ 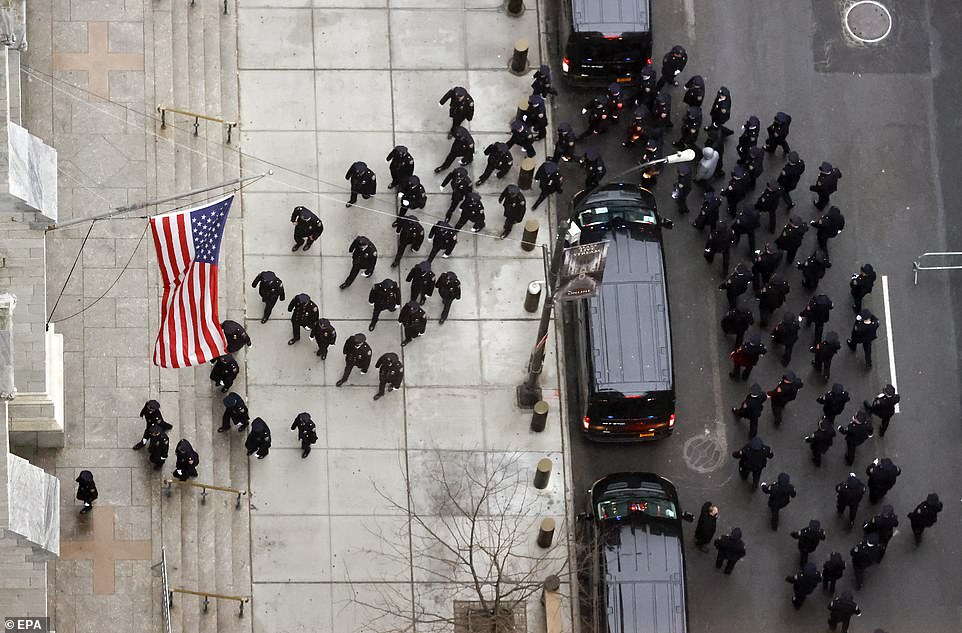 An overhead view of members of the New York City Police Department arriving to St. Patrick’s Cathedral for Rivera’s funeral service on Friday 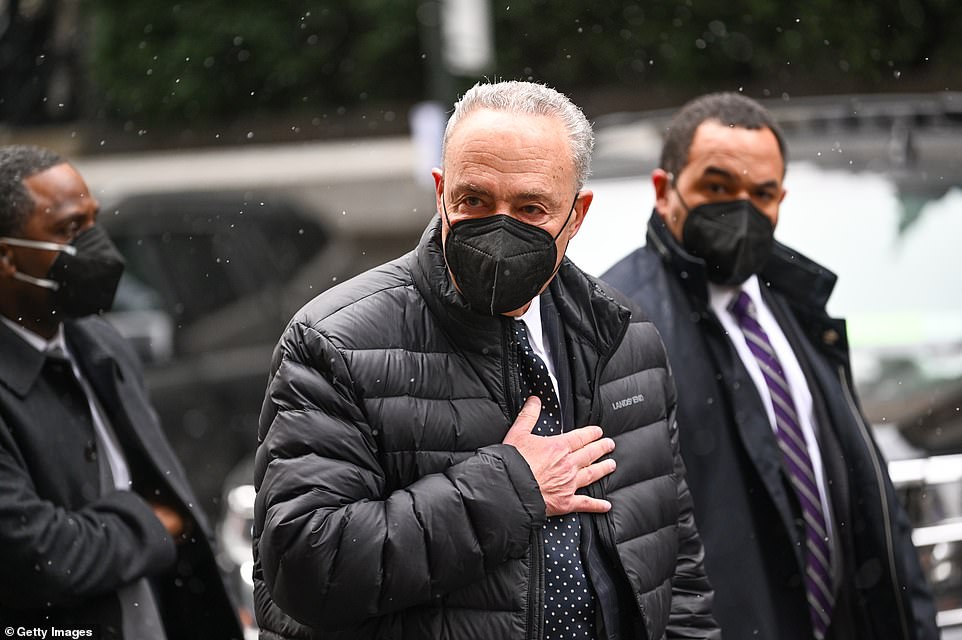 Sen. Chuck Schumer (D-NY) arrives for the funeral of Officer Rivera at St. Patrick’s Cathedral, a day after he attended the hero cop’s wake 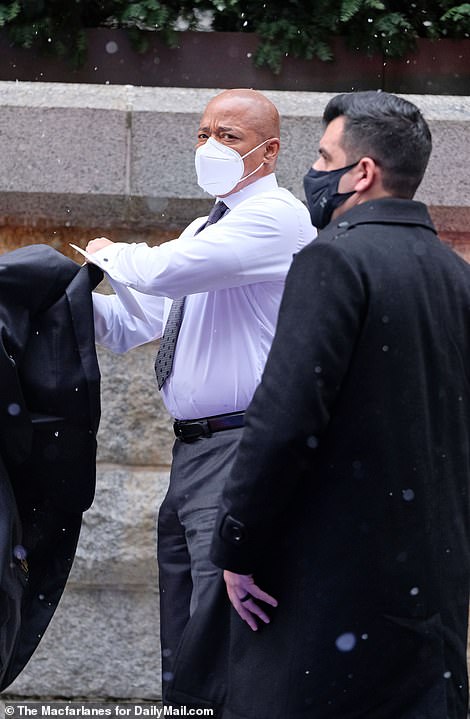 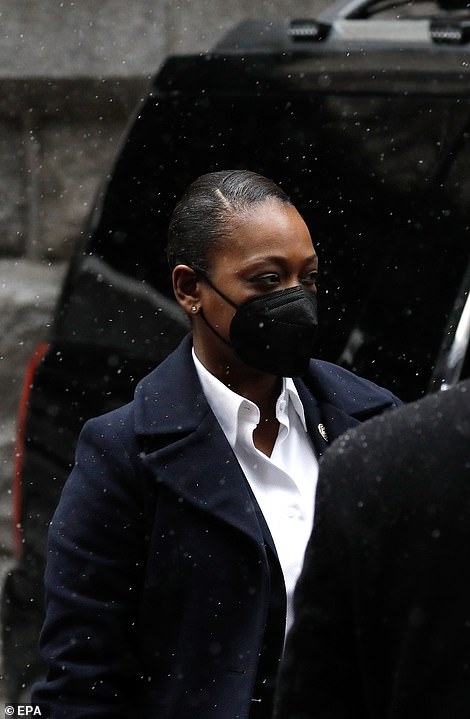 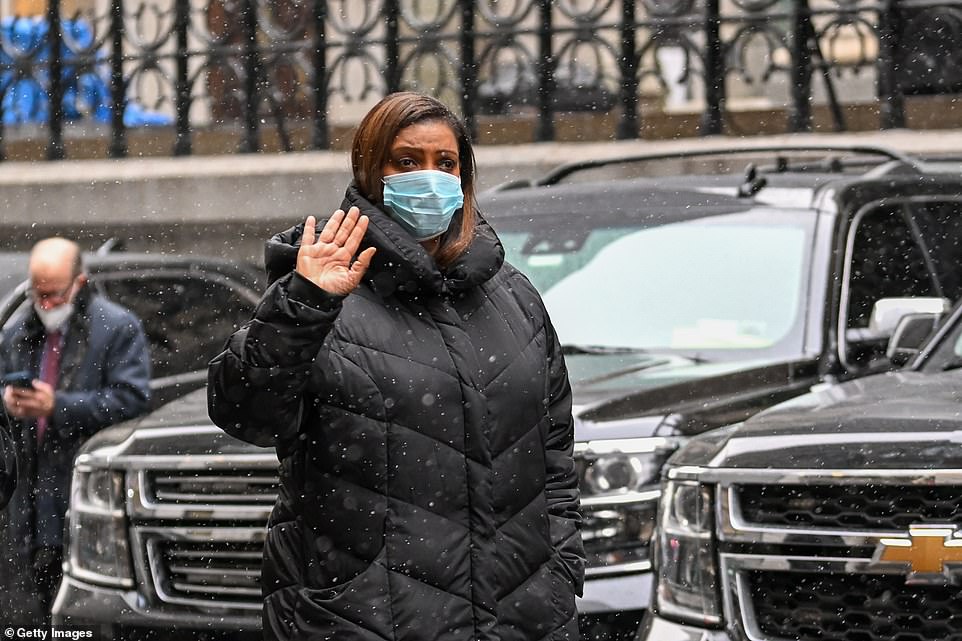 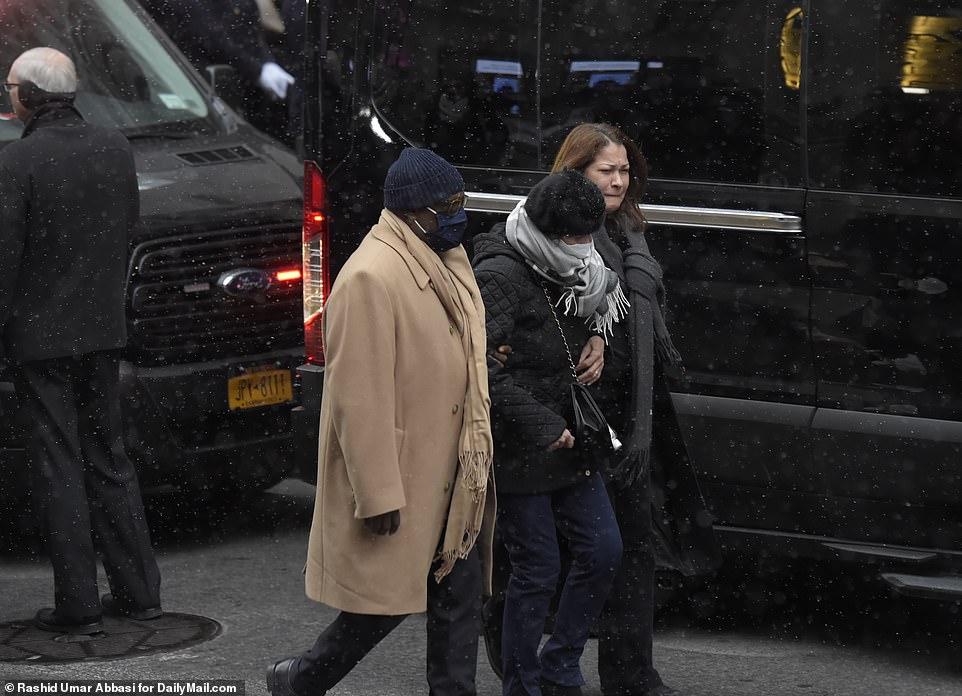 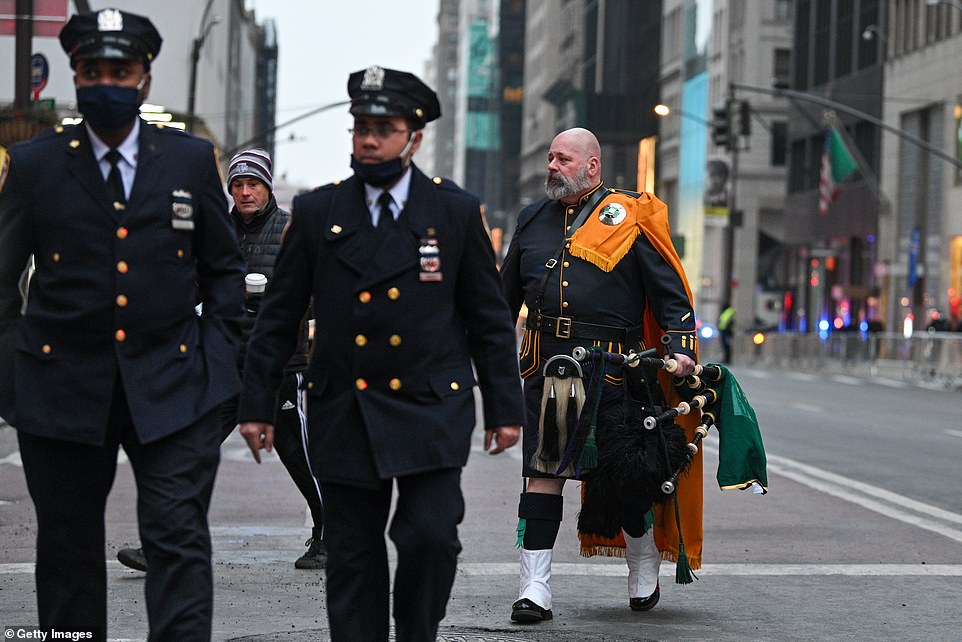 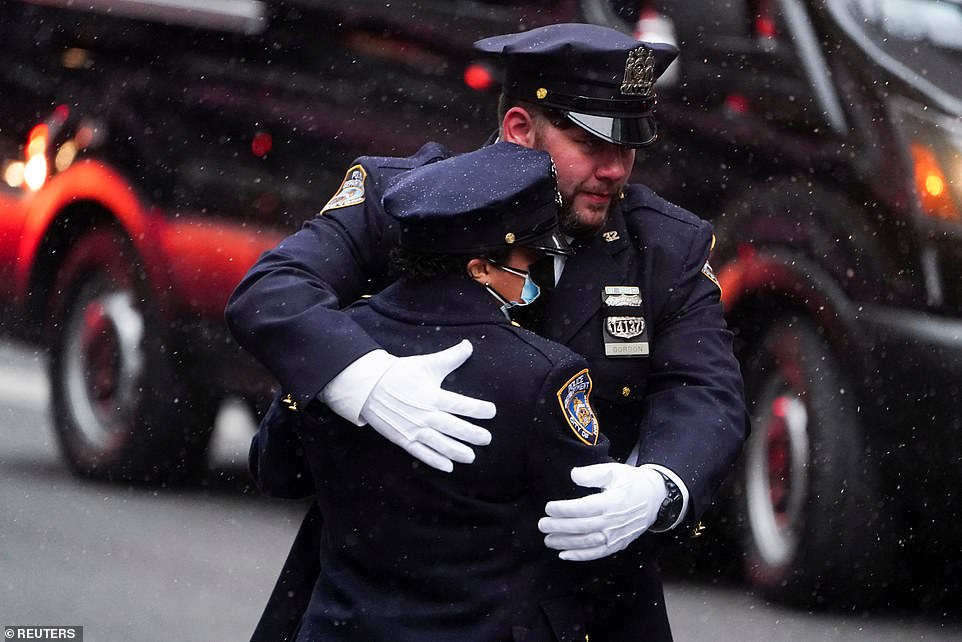 Throughout the week, friends and fellow police officers remembered Rivera and Mora as caring and dedicated. Both grew up in the city’s ethnic enclaves and, by many accounts, had hoped to help the department build bridges with the community. 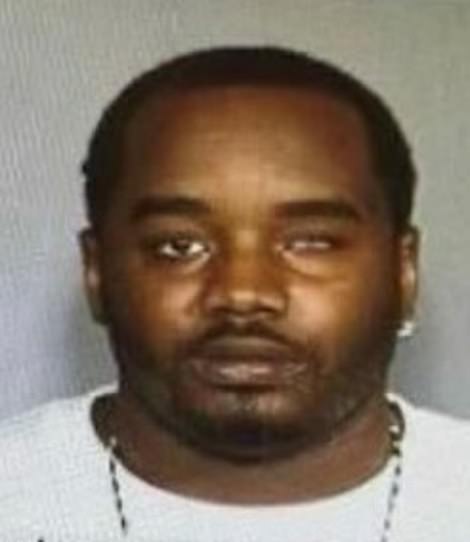 Lashawn McNeil, 47, who was shot by a third officer, died on Monday

The gunman, 47-year-old career criminal Lashawn McNeil, who was shot by a third officer, died earlier in the week. Authorities are still investigating why he fired at the officers as they responded to a domestic violence call in Harlem.

Rivera had been an NYPD police officer for less than a year. He leaves behind his newlywed wife, Dominique.

The couple met in kindergarten at age 5 and began dating each other when they were 15 years old. They got married on October 9, 2021.

‘That was her first love, her only love,’ Carmen Suarez, a fellow NYPD widow, told PIX11.

Mora was in his fourth year on the job. His wake and funeral Mass were planned for next week, also at the iconic Roman Catholic cathedral.

Before Friday, the last NYPD officer killed in the line of duty was Anastasios Tsakos, who was struck by a suspected drunken driver in May 2021 while assisting officers at the scene of an earlier crash on a Queens highway.

The last NYPD officer fatally shot in the line of duty, Brian Mulkeen, was hit by friendly fire while struggling with an armed man after chasing and shooting at him in the Bronx in September 2019.

In 2015, Officer Randolph Holder was shot and killed by a man riding a stolen bicycle in Manhattan and Officer Brian Moore died after he was shot by a man in Queens.

The year before, Officers Wenjian Liu and Rafael Ramos were fatally shot by a man who ambushed them as they sat in their patrol car in Brooklyn.

There have been 73 shooting incidents so far this year in the city – an increase of 23.7 per cent compared to last year. A total of 82 people have been shot as of January 23, up from 67 in the first three weeks of 2021.