An off-duty police officer allegedly shot at least three people when he fired into a crowd during a brawl at a carnival celebration in northeastern Brazil.

A bystander recorded the moment several carnival spectators exchanged punches and kicks in the middle of a street in Campo Grande in the Sao Bento region on Monday night.

A male, who has not been identified by the government of the state of Bahia, could be seen on the video firing one shot moments after another male attempted to kick another person and fell to the ground. 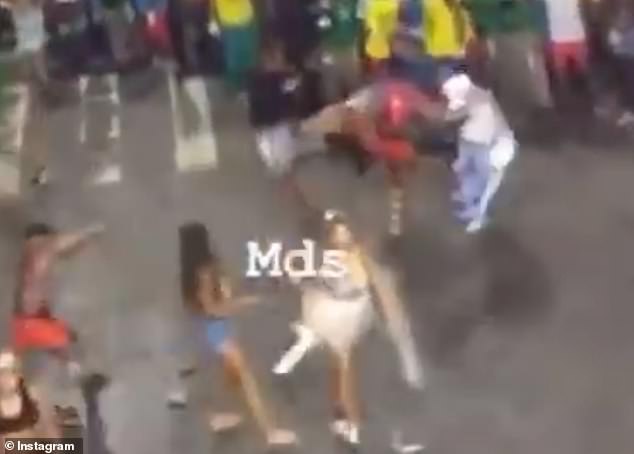 Authorities in the Brazilian state of Bahia are searching for an off-duty cop  (pictured left in orange shorts) who reportedly fired into a crowd of carnival spectators Monday. At least three people suffered gunshot wounds in their legs and have been released from a local hospital

He subsequently got up from the pavement and ran for cover along with dozens of other carnival visitors.

The suspected shooter, who government officials said is believed to be an off-duty police officer, retreated into the crowd and disappeared before the video came to an end.

The three victims received treatment for their leg wounds on site and were transported to State General Hospital, according to a statement released by the Bahia state government.

All three were released from the hospital, according to the Secretariat of Public Security.

Authorities were reviewing public security cameras in hopes of finding the cop, who was reportedly involved in the fight. 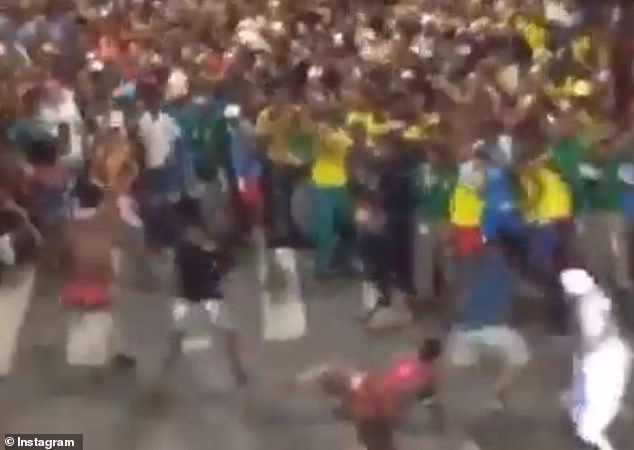 Several spectators at a carnival in northeastern Brazil were involved in a fight Monday, sparking a shooting that left three people wounded. No arrests had been reported as of Tuesday afternoon

No arrests had been announced as of Tuesday afternoon.

Monday’s incident was the second in two days that marred the festival.

On Sunday, 25-year-old Fernando Almondes was the victim of a homophobic attack when he was kicked and elbowed by a male spectator near a concert stage.

Almondes told Brazilian news outlet G1 that he was also kicked in the head and was treated at a local hospital where he received five stitches in his upper lip.

Billed as ‘the biggest carnival in the world,’ the Bahian Carnival in Salvador kicked off festivities last Thursday and will wrap up Wednesday afternoon.