Officials BAN local politician from riding along on council gritters

A councillor has been banned by officials from riding along on a gritter to provide updates on road conditions to his Facebook followers during bad weather.

Steven Bridgett, councillor for Rothbury in Northumberland, posts live videos to his 3,000 Facebook followers to highlight where the gritters have been.

But he has now been blocked by the council in a decision Cllr Bridgett has slammed as ‘petty politics’ which will threaten safety. 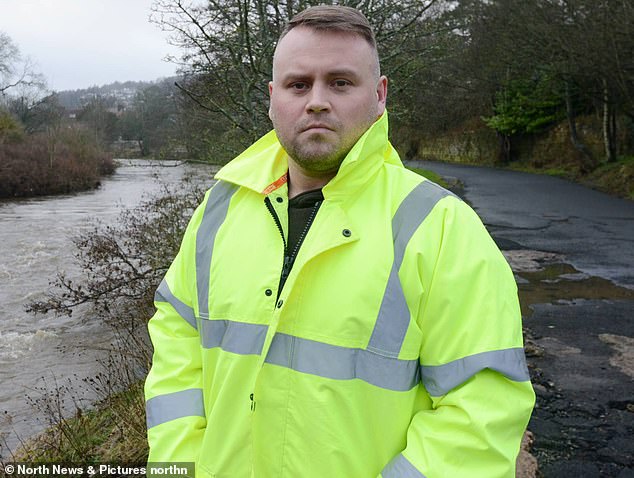 Steven Bridgett, councillor for Rothbury in Northumberland, posts live videos on to his 3,000 Facebook followers to highlight where the gritters have been

The 32-year-old, who has been a councillor in the area for 13 years, said: ‘This puts people’s lives at risk.

‘A number of residents have said the first thing they check before going or coming back from work is my social media to see if the road conditions are safe.

‘Residents not having that level of information in order to make informed decisions is dangerous. It’s putting their safety at risk.

‘I think this decision is health and safety gone mad.

‘It is bureaucracy and red tape wrapped up in petty politics. 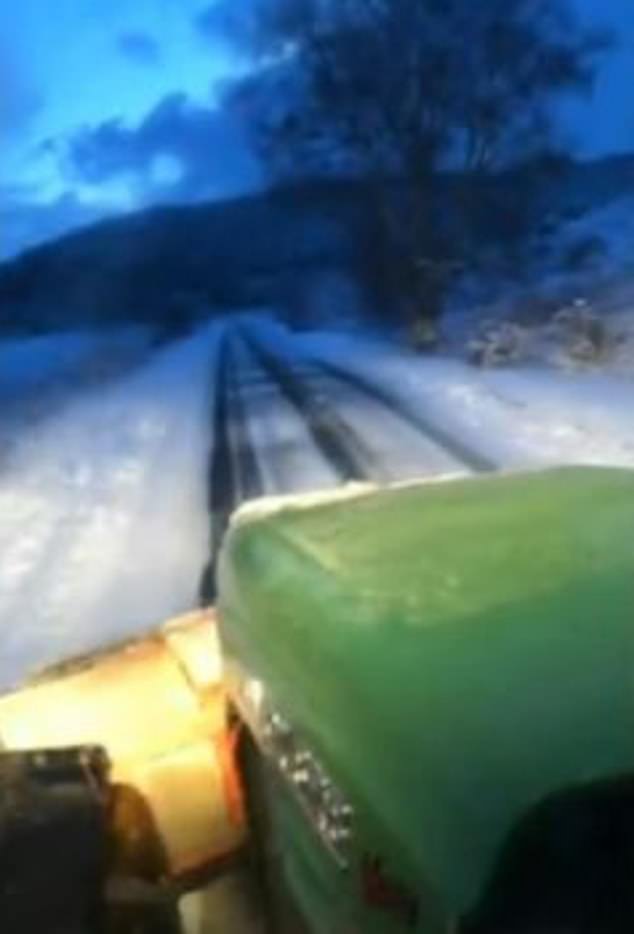 Councillor Bridgett, an independent, first began riding with the gritters three-years-ago and only does so in more extreme weather conditions. Pictured Cllr Bridgett as a passenger on the gritter

‘It is about being informed. If the council cannot or will not offer the level of information I do and have banned me from operating then they are neglecting their duty to the residents.’

Councillor Bridgett, an independent, first began riding with the gritters three-years-ago and only does so in more extreme weather conditions such as during the Beast from the East in 2018.

He said: ‘When we have had prolonged periods of snowfall, I have gone out with one of the local contractors or gritters. 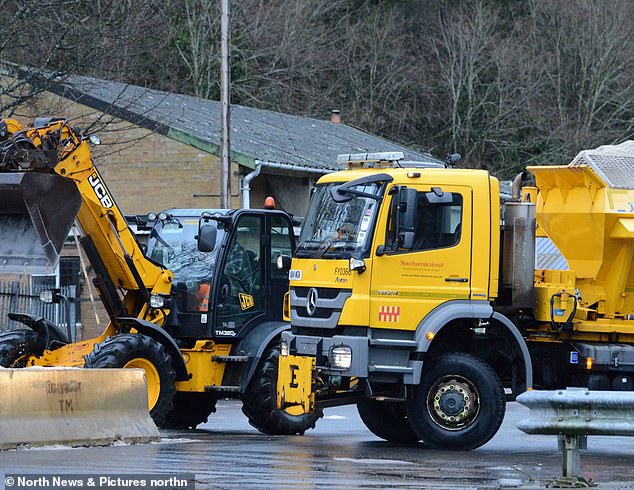 Councillor Bridgett said he updates his followers so they can see where the gritters have been. Pictured: Gritters at the depot in Rothbury, Northumberland

‘I have about 3,000 people following me on Facebook and I have done live broadcasts to my page so residents can see exactly where the gritters have been.

‘They work absolutely tirelessly through the nights. I do this so the the local residents are able to see the conditions on the roads.

‘The areas of my constituency really do have their own microclimates. The weather in Alnwick, Morpeth or even Longframlington can be different from what it’s like here.

‘The local residents rely on this service.

‘The council say they give social media updates but the other day there was more than 20 cars stuck between Rothbury and Moor House and they hadn’t put anything out about it.

‘Half the battle when you are a local councillor is communicating with your local residents. What I do helps assure residents.’

Cllr Bridgett says he heard a rumour he’d been banned and it was only when he contacted Northumberland County Council to check that the news was confirmed.

He added: ‘Nobody bothered to tell me that I couldn’t go out with the gritters.

‘When I got wind of it I had to contact the council officers to check with them.

‘That’s when they sent me an email confirming.

‘The council have said it’s because of insurance purposes, health and safety and complaints from staff. They’ve also said councillors should not be involved in the delivery of services, that our job is to decide on strategy.

‘I am happy to undertake any health and safety training and pay for it myself.

‘In terms of the complaints, it’s also transpired that none of the front line staff have had an issue.

‘If the council is worried about my safety on the gritter I’m happy to sign whatever waiver and disclaimer to say there would be no liability.

‘The council just aren’t prepared to compromise in any way.’

A spokesperson for Northumberland County Council said: ‘While we are keen for councillors to understand what the jobs of our frontline staff entail, we have always been clear they should not be involved in operational service delivery.

‘Our highly skilled team of drivers operate around the clock in often hostile weather conditions, which require complete and total concentration.

‘All have undergone comprehensive training on all aspects of the job, including rigorous health and safety training – none of which Cllr Bridgett has undertaken, nor would we expect him to. We have a duty of care not just to all our staff but all elected members.

‘Cllr Bridgett originally sought permission to travel in a gritter to understand how the service is provided, which we were happy to facilitate.

‘However, having gained an insight into the work, there is no real benefit in him or any other elected member continuing to ride as a passenger, as this creates an additional burden and distraction to our staff who need to focus on their duties in often difficult and dangerous conditions.

‘Cllr Bridgett was informally advised about this on a number of occasions but unfortunately it has now been necessary to make this more formal, as he had been approaching staff and contractors directly to gain access which is not appropriate.

‘The council provides regular gritting updates online and through its social media channels.

‘However with over 5,000 kilometers of road and often unpredictable weather conditions in the county, it is impossible for us to provide detailed localised updates for every individual community.

‘Where specific issues are identified, we work closely with the emergency services to provide bespoke updates and guidance to residents.

‘We are not stopping Cllr Bridgett from providing regular information to residents from whatever other sources he is using.

‘However, it is very disappointing he has chosen to encourage local residents to directly contact council officers who are working round-the-clock to co-ordinate a team of 100 staff and 29 gritters, at one of the busiest times of the year for our winter services team.