The nation raised a collective eyebrow earlier this month when Ohio Gov. Mike DeWine announced five $1 million lottery prizes for adults and five full-ride scholarships for teens in Ohio who are vaccinated. But it seems the unorthodox proposal is working.

Under the plan, unveiled on May 12, Ohioans ages 18 and older who have received at least one dose of the vaccine will be eligible for an Ohio lottery. For five weeks, starting this Wednesday, one name will be drawn from the lottery and that person will receive $1 million.

Vaccinated Ohioans under 18 will be entered into a similar drawing for full college scholarships, including tuition, room and board. 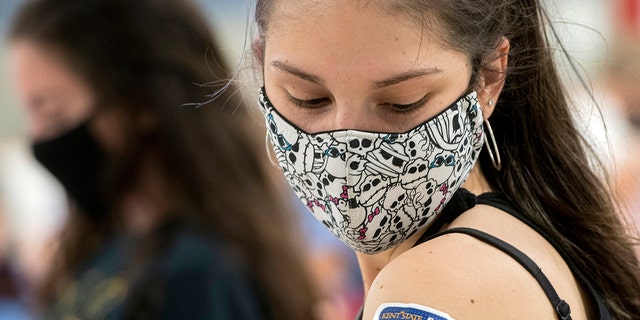 FILE: Kent State University student Regan Raeth, of Hudson, Ohio, looks at her vaccination bandage as she waits for 15 minutes after her shot in Kent, Ohio.
(AP)

The plan drew criticism from both Democratic and GOP lawmakers, who said it isn’t appropriate to use federal pandemic dollars for a contest.

But Andy Slavitt, President Joe Biden’s senior COVID-19 adviser, said anything that draws attention to vaccines is a good thing. He told CNN: “In general, I think we like the idea of contests.”

The first winner of the Vax-A-Million lottery will be announced Wednesday at 7:29 p.m.