On the ninth attempt, year 2 students finish their first full term in the classroom

As Jensen left school in Frankston South on Friday, the eight-year-old and his mother Rebecca May had more to celebrate than just the end of term one.

For the first time in Jensen’s school career – on the ninth attempt – he enjoyed a full term in the classroom, without one day of remote learning. 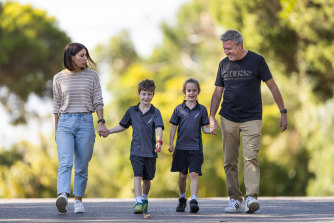 Rebecca May and son Jensen with Peter Clarke and daughter Bella. The children have just completed their first full term at school – but had to wait until grade two to do it.Credit:Jason South

“I had heaps of fun this term,” Jensen said shortly after the final bell at Woodleigh School. “Seeing my friends, playing at recess and lunch. Last year, instead of being in the classroom, we had to do Zooms. I didn’t like it as much.”

“I’ve noticed a lot of learning about how to navigate relationships, a lot of coming home when there’s been some conflict between him and his friends,” Ms Jensen said.

“Towards the end of the last lockdown last year he did get quite down, saying ‘when am I going to see my friends? When will this be over?’ From that perspective, I’m so happy he’s had a full term.”

As a part-time teaching student, Ms Jensen had a free-of-charge internship experience leading Jensen’s first two years at school – not one she’d necessarily want to replicate.

“He was a kid that was quite engaged with his learning, but it’s been pretty amazing having that little bit of space and time. Being able to see them after school, say ‘hey, how was your day?’ and enjoy our company, rather than being compressed together, has been nice,” Ms May said.

It’s hardly been a normal school term for parents and students, who have had to contend with masks, rapid antigen tests and contact-tracing notifications as COVID-19 cases soared, particularly at the start of term.

Jensen shares a classroom with Bella Clarke, who called this term “really exciting” because she got to meet new students.

“I played basketball for the school team. We played lots of games. And I like my teacher. She’s nice,” she said. 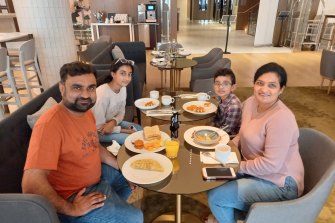 Father Peter, whose nine-year-old son Charlie also attends Woodleigh, said both his children were exhausted by the end of each school week this term.

“They were good at using technology to speak to each other and maintain some relationships, but it’s obviously not the same,” he said. “Especially for Bella, I think it was back to square one for some friendships.”

Mr Clarke said after two years of remote learning, Bella’s reading and writing skills were behind what Charlie’s were at the same age.

“It’s had an impact on their formative years. I think, all things considered, the education system has done pretty well though, and I suspect they’ll all catch up,” he said.

Dhaval Gadhvi welcomed his seven-year-old son Arhaan’s first full term in the classroom as a welcome shock out of the increasingly laidback work-from-home habits that would be familiar to many Melburnians.

“He and his [year 8] sister Aahna’s sleeping habits have changed. Last year they got relaxed knowing they didn’t have to wake up early, they had dinners later,” said Mr Gadhvi, who lives in Clyde in Melbourne’s south-east.

“Now they wake up looking forward to go to school. You can’t ask for more than that.”

The family is looking forward to enjoying the cinema followed by a trip to the Gold Coast together.

“The kids have their own time at school, and now that means we can enjoy our time together too,” Mr Gadhvi said.

Education Minister James Merlino said being back at school face-to-face made a huge difference to students’ learning, social skills and confidence.

“It’s been fantastic to see all Victorian schools back full-time throughout term one,” he said.