Almost half of all shopfronts in Docklands were closed or vacant in December, making it the precinct worst affected by the pandemic in the struggling inner city and surrounding suburbs.

A City of Melbourne report found 47 per cent of street-facing shops had shut their doors – 21.9 per cent of them vacant and 25 per cent temporarily closed – after rolling COVID-19 restrictions. 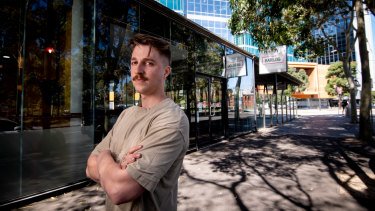 Docklands has been hit hard by work-from-home orders, the council said, with small businesses in nearby established residential areas – including East Melbourne, Port Melbourne, North Melbourne and Kensington – faring much better than areas relying on office workers for trade.

This week, with businesses able to bring back up to 75 per cent of staff at one time, there are hopes that grim picture could improve.

Vanessa and Connor Cunliffe, the mother-and-son owners of Barlog Espresso, haven’t bothered reopening their cafe since the second wave.

But they’ve decided they need to take the plunge in two weeks to make use of the rent they’ve been paying. They say they’re hopeful, but realistic.

“We might as well try and do something with it,” Mr Cunliffe said.

“We actually went there [on Wednesday] just to have a look at the area and it was very quiet … It’s just empty,” Mr Cunliffe said.

Ms Cunliffe said it was so “dead” looking towards the city up Collins Street she could count the number of people in view: 20 people “as far as my eye could see up the hill”.

“It’s going to take us years to get back to where we were pre-COVID. There’s just no one there.”

The number of workers commuting into Docklands last week was closer to the numbers seen during the second lockdown than 2019 levels.

Pedestrian trackers counted 376 people crossing the Webb Bridge between 5pm and 6pm on Wednesday, up from an average of 274 at the same time during Melbourne’s second lockdown.

But it’s way below an average workday in 2019, when 617 people were counted on the bridge between 5pm and 6pm.

Before the pandemic, Docklands was rapidly growing.

An extra 39,100 jobs were created in the precinct in the 10 years to 2019, when a total of 73,000 people worked in Docklands. Major employers had moved their offices to fill 458,000 square metres of new office space, largely thanks to Development Victoria’s renewal project.

That has been stunted by COVID-19, with just 31 per cent of CBD workers heading into their offices in January (up from 13 per cent in December and 8 per cent in October).

Office vacancy rates across the CBD reached 8.2 per cent in January, up from 5.8 per cent in July, according to the Property Council.

Saluministi business partners Peter Mastro and Frank Bressi have known each other since high school, and have become like family. So too are the staff members, the majority of whom are international students from Italy.

Last February, Mr Mastro and Mr Bressi had big dreams to further expand their growing hospitality empire into a third business (they also have a cafe in Flinders Lane). Then, COVID hit. 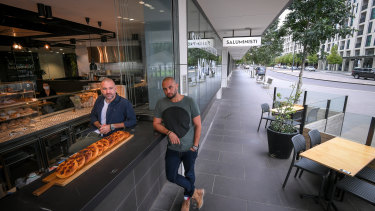 “For me to close the doors, they physically wouldn’t have been able to stay in the country, they would have had to go home, so that wasn’t an option.”

Instead, the business had to shift focus. They collaborated with other Italian restaurants such as Postmistress in Brunswick West to offer Father’s Day lunch packages. They branched out into homewares (gift boxes, hampers and crockery), and sold luxury pre-cooked food under their Saluministi A Casa (at home) banner.

Last year was a fight every step of the way to keep the doors open, but they did. And they kept every staff member on.

Johanna Maxwell, president of the Docklands Chamber of Commerce, can’t see workers getting back into their office five days a week any time soon. She’s expecting about half of local businesses to shutter for good.

“It impacts not only our cafes and restaurants, but it also impacts the smaller traders like our physios, the chiropractors, the [osteopaths], the dentist, the doctors, the chemists,” Ms Maxwell said.

“The other side of it is that there are no tourists. So we have a lot of accommodation providers down here where people come and stay … They then go and have breakfast and they shop and they have their tourist activities here in Docklands before they actually broaden out into the broader Melbourne area.”

City hotels in January had an occupancy rate of just 39 per cent, much of which could be attributed to hotel quarantine, a council report said.

At the same time, demand to live in Docklands has crumbled.

Rents have fallen 22.7 per cent since March last year, according to CoreLogic analysis. Unit values were down 5.1 per cent over the same period.

Tim Lawless, the head of research at CoreLogic, said demand for inner-city apartments was partially dependent on borders reopening for international students.

“But also inner city precincts recovering from the COVID hangover where a large portion of workers are still working remotely or under flexible arrangements,” he said.

Dr Peter Hurley from the Mitchell Institute estimated – using data from Home Affairs and the Australian Bureau of Statistics – COVID-19 has stripped 1090 international student residents from Docklands, 6.9 per cent of its population.

Melbourne lord mayor Sally Capp, who lives in the precinct, said: “As a passionate Docklands resident, I think the area has been unfairly maligned over a number of years.

“Docklands has been hit particularly hard by the pandemic, with tens of thousands of workers working from home for months on end.”

On Tuesday, councillors will consider how to reactivate shop fronts in the city and whether to offer free parking for the duration of the Moomba 2.0 festival in March.