One easy way to support trans people at work

As a young worker with a tertiary degree, numerous federal government and university scholarships and years of experience in my sector, I never expected to hear these words. “We’re letting you go.”

I had been a straight-A student, a worker since I was 14 and a problem-solver who took initiative in my career. To say I was shocked, would be an understatement. 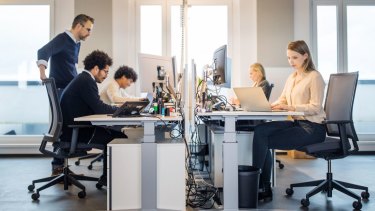 Using the wrong pronouns might seem insignificant, but for trans people it is a painful daily reminder that the world does not see you the way you see yourself.Credit:Getty.

So what made this employment experience so different? Well, this was the first time I ever came out as trans.

When I first came out at work, it was because I was tired of being referred to as ‘she’ or ‘her’ in the office. Whether it was in staff meetings or offhand comments, my co-workers all assumed I used she/her pronouns without asking. In fact, it was not an office environment in which people talked about pronouns at all. The continuous misgendering was so jarring I started dreading going to work. Eventually I decided that the only way to ease my discomfort was to let everyone know I used they/them pronouns.

First I approached my manager to explain my gender identity and pronouns. She seemed supportive and forwarded all staff some articles I provided on non-binary identity and pronouns. We both openly acknowledged that it would take time for people to get the hang of it and that making an effort was the most important thing. I was comforted when my team members immediately started correcting themselves and even had conversations with me about gender and sexual identity.

However, the CEO of my company never managed to use the correct pronouns. From referring to me as ‘she’ in meetings or calling me feminine pet names like “sweetie”, she misgendered me so many times over the next few months that I almost regretted undertaking the huge burden of coming out. She also rarely said sorry for misgendering me, even when I corrected her.

Using the wrong pronouns might seem insignificant, but for trans people it is a painful daily reminder that the world does not see you the way you see yourself. That people close to you refuse to make even the smallest change to their thinking and their language to recognise who you are, and make you feel comfortable. Being constantly misgendered by someone in a position of power was incredibly upsetting, but the fact that the CEO never used my correct pronouns was merely a broader reflection of the office culture in general.

The organisation focused heavily on hierarchy, micro-management, hyper-productivity and following orders. I found myself advocating for basic workplace rights, like my entitled award rate breaks, when I saw my manager taking notes on the amount of minutes I had been out of the office. What I saw as simple misunderstandings or miscommunications, were interpreted as my inability to follow directions, or rude and defensive behaviour.

There is no hard evidence to prove I was let go because I am a transgender person of colour. But how could the context of being fired immediately after enforcing my pronouns and workplace rights be left out of the equation? The CEO’s official reason was that I was “not a good cultural fit,” which begs the question, what kind of person would fit?

Being fired without even an official warning by a CEO who misgendered me for months speaks volumes about the reality of being an openly trans person of colour in the workforce. Employment experiences like this keep trans people closeted, causing immeasurable damage to our mental health, or puts us in material poverty and chronic unemployment for being proud of who we are.

The truth is that until employers are held accountable, until systemic changes to hiring and firing occur, until workers have the right to housing, food, and education without relying on the whim of managers, no trans person will be safe at work.

Bridget Harilaou is a freelance writer.