One quarter of Britons found the second national lockdown harder

More than a quarter of Britons found it harder to follow the second lockdown compared to the first, a survey has revealed.

The most common reasons for struggling were feeling fatigued by Covid restrictions, a belief measures were unjust and bad weather restricting people from going outside and seeing friends and family.

Experts feared that ‘lockdown fatigue’ would mean many Brits would defy the second shutdown and see loved ones anyway.

But King’s College London scientists found a ‘remarkable resilience’ in the British public, with 82 per cent still following the rules to the best of their abilities.

Of the Brits that admitted finding the rules tougher, 44 per cent said bad weather was the driving factor because it made it harder to see others and get outside.

Some 42 per cent said it was because they felt fatigued by the crisis, and 34 per cent said the restrictions had not being applied fairly.

A third blamed flailing trust in the Government or official advice as a reason for finding the second lockdown harder. 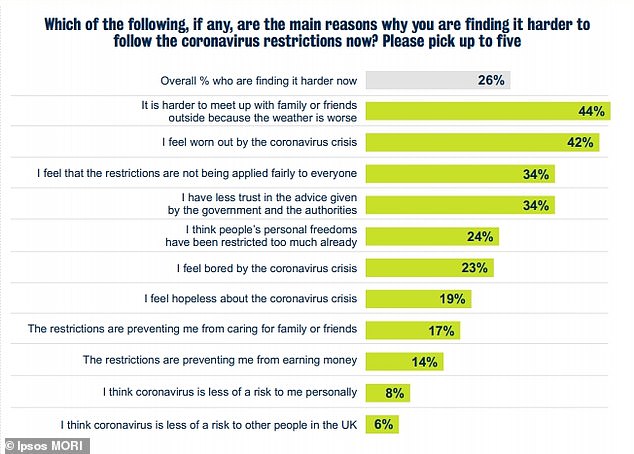 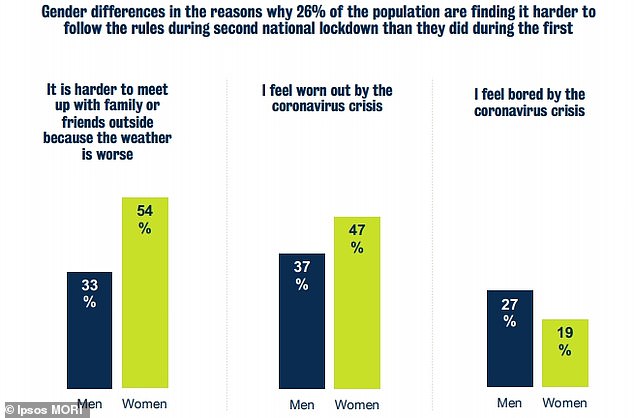 ONLY THREE HOSPITALS ARE BUSIER THAN THEY WERE LAST WINTER

Number 10 was today accused of running a ‘brainwashing PR campaign’ after MailOnline’s analysis of official data showed only three NHS trusts in England are busier now than they were this time last year — despite warnings the health service would be crippled by coronavirus without the revamped three-tier lockdown system.

Michael Gove sparked fury over the weekend when he claimed that every hospital in England would be ‘physically overwhelmed’ by Covid-19 without the Government’s new restrictions, as he tried to persuade MPs and the public to support the brutal curbs.

This figure does not take into account make-shift capacity at mothballed Nightingales, or the thousands of beds commandeered from the private sector.

A quarter – 24 per cent – said they felt people’s personal freedoms had been restricted too much already, 23 per cent felt bored by the crisis and 19 per cent said they already felt hopeless about it.

The KCL survey found women were more likely to find the second shutdown harder, with 47 per cent saying it left them feeling worn out compared to 33 per cent of men.

A majority of women who found the rules tough, 54 per cent, said this was because they missed meeting friends outside.

But men were most likely to say they found it tougher, 27 per cent, because they were bored.

The researchers interviewed 2,244 UK residents aged between 16 and 75 online between November 20 and 24 for the survey.

The attitudes survey was carried out for the first time by the university with pollster Ipsos Mori to monitor observance of national restrictions.

Professor Bobby Duffy, director of KCL’s Policy Institute, said the public has been ‘remarkably resilient’, with the majority saying they are following restrictions carefully during the second lockdown.

He continued: ‘But this isn’t everyone’s experience: one in six say they’re not being as careful in obeying the rules, and one in four have found it tougher to follow them this time.

‘Social isolation and a feeling of being worn out by the crisis are drivers of this, but so too is the official response to the pandemic.

‘A third of those who have found the latest rules more of a struggle say it’s because they feel the restrictions have not been applied fairly, and the same proportion cite reduced trust in official advice as a reason.

‘As we come out of this national lockdown and enter a new tiered system, the Government must rebuild confidence in its approach and clearly communicate what it is doing and why.’

Some 14 per cent of lockdown breakers said they had been pressured to break restrictions by a friend or family member.

And 16 per cent said they had accidentally broken the rules because they didn’t realise, which rose to 29 per cent for those aged between 16 and 34.

Over the course of the pandemic, almost three-quarters, 72 per cent, have felt disappointed by people not following recommended measures in public.

And one in six even said they felt there was ‘no point’ in following the measures, and were being less careful.

Kelly Beaver, managing director of public affairs at Ipsos MORI, said: ‘While the majority haven’t found this second national lockdown anymore of a struggle than the first one, it’s important to remember that women found the first lockdown harder than men.

‘And we see now that those who say they’re struggling more with being worn down by the crisis are also disproportionately women.

‘This research contributes to the body of work which brings to light the broader social impacts of the lockdowns which have been implemented this year.’

The Government’s second lockdown in England is set to end on December 2, and be replaced with the tier system.

It sees more than nine out of ten Britons banned from mixing with friends and family indoors as only Cornwall, the Scilly Isles and the Isle of Wight will fall into Tier One.

Ministers have faced criticism over the plans, but said the tiers will be reviewed every two weeks and if areas have falling infections they will be able to drop down the tiers. 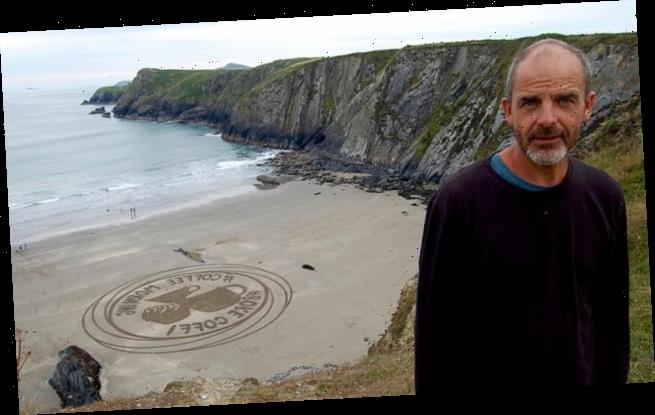