This is the touching moment a barn owl that had his wings scorched in the California wildfires was found by firefighters – before falling asleep in the arms of its rescuer.

The exhausted owl was discovered by Orange County Fire Authority firefighters in the Silverado Fire on Tuesday evening with most of its wing feathers destroyed.

Footage shows the bird being picked up by firefighters before it falls asleep on one of their laps inside a helicopter on the way to a rescue center. 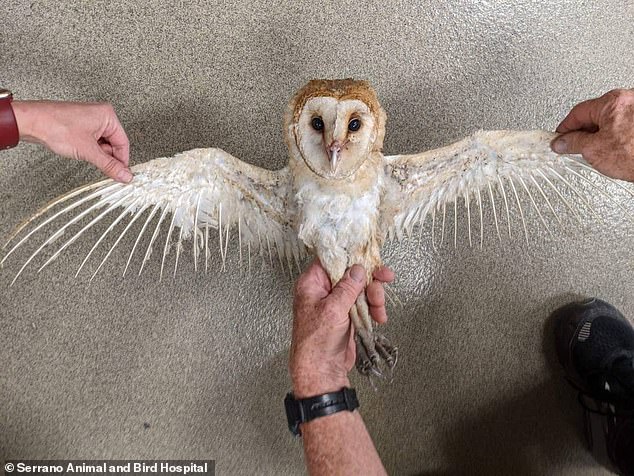 A barn owl that had his wing feathers destroyed in the Silverado Fire, was rescued by firefighters in Orange County, California 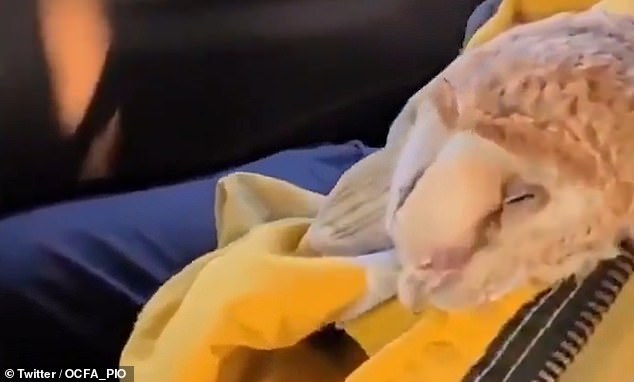 In the video, a firefighter wearing gloves wraps the injured owl in his jacket before picking him up.

Once inside the helicopter, the poor animal sleeps peacefully on his rescuer’s lap while a pilot

He says: ‘I’d like to put a request in for animal control for an injured owl that was picked up.’

Talking to the owl, one of the firefighters says: ‘We’ll get you some help, buddy.’ 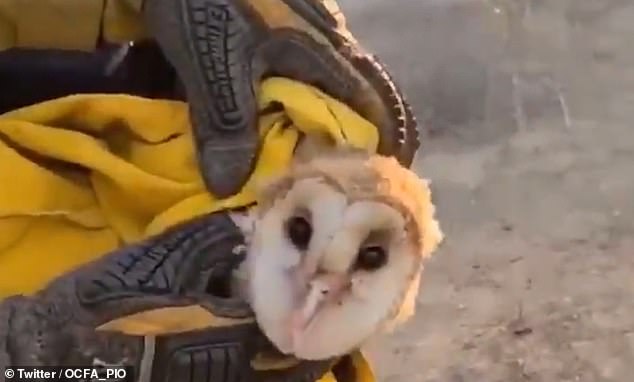 Yesterday, the Orange County Fire Authority said: ‘Earlier this evening one of our crews on a brush rig rescued a barn owl from the flames of the Silverado Fire.

‘He’s safe and sound and currently with animal control.’

The bird was taken to Serrano Serrano Animal and Bird Hospital for treatment, where he will likely spend a few months as his feathers grow back.

The hospital said later on : ‘This is our first victim of the Silverado Canyon Fires. 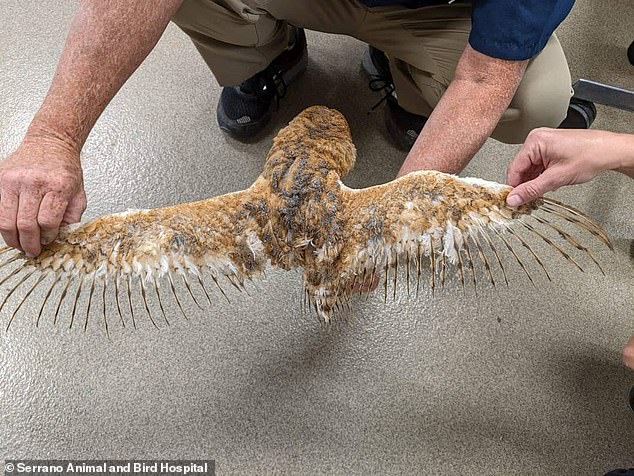 The bird was taken to Serrano Serrano Animal and Bird Hospital for treatment, where he will likely spend a few months as his feathers grow back

‘After an exam by our doctors, it was determined that most of his injuries are burned feathers. We are not sure how bad his smoke inhalation damage is.

‘We will have to hold onto him for a number of months until he molts new feathers.

‘Once he gets new feathers, he will be able to be released.’

The Silverado Fire is one of two wind-driver wildfires that began in Orange County Monday and forced tens of thousands of residents to evacuate their homes. 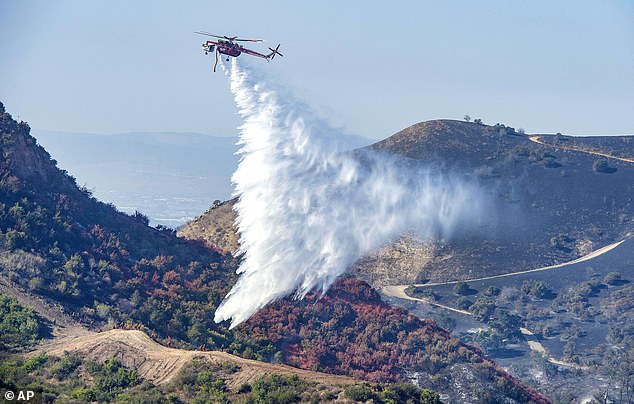 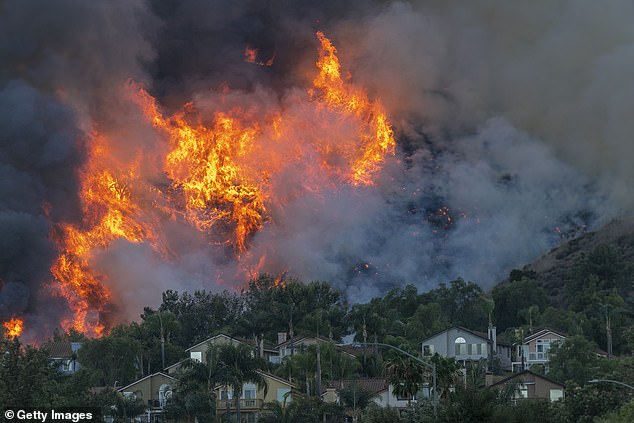 Flames rise near homes during the Blue Ridge Fire on October 27 in Chino Hills, California 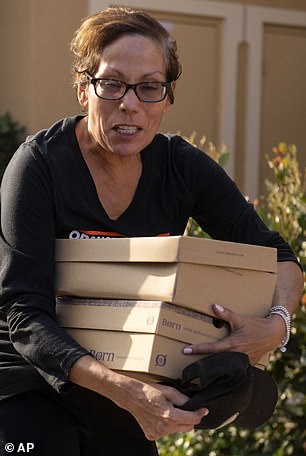 A woman in Orchard Hills near Irvine is pictured evacuating from her home on Monday due to the Silverado Fire. Two wildfires were approaching Orange County neighborhoods south of Los Angeles on Monday

The blaze, which is burning near Irvine and has seen tens of thousands of residents forced to evacuate, has burned 13,390 acres and is currently 40 per cent contained according to Calfire.

It has gravely injured two firefighters and was started by a cigarette that was tossed onto dry brush, authorities revealed Tuesday.

The smoker threw it out on Peterson Road and, helped by 30 mph winds, the blaze broke out Monday outside the Travis AFB South Gate near Highway 12 and Walters Rd in Solano County.

‘We did find a half burned cigarette butt that was indicative of the start of this fire,’ Suisun Fire Chief Justin Vincent said.

With the Blue Ridge Fire also starting on Monday near Yorba Linda, locals had to flee as both wildfires headed toward their neighborhoods.