Prime Minister Scott Morrison’s visit to the Pacific has buttressed some of Australia’s key alliances amid growing global concerns about China’s economic, military and political expansionism, which has been particularly evident in our region.

His three days in Vanuatu and Fiji last week pacified some of the regional neighbours he candidly confesses Australia has taken for granted, the biggest issue being global warming, which poses an extreme threat through rising sea levels and the increased frequency of catastrophic weather events. 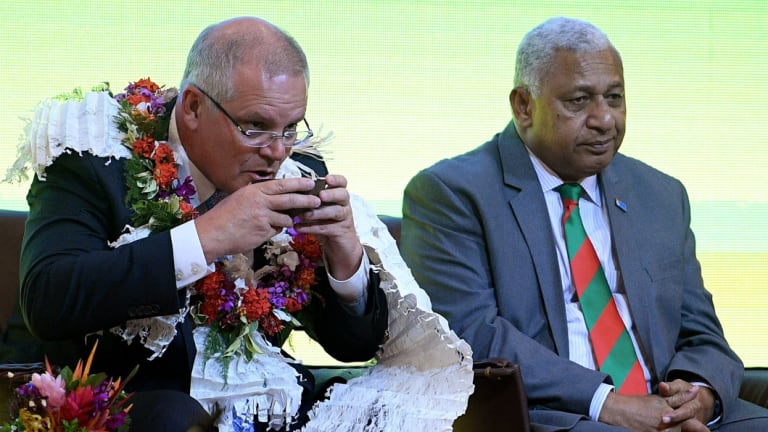 The visit was not only diplomatically and symbolically significant, it also heralded substantial developments. Mr Morrison and his counterparts announced a panoply of policy co-operation, overwhelmingly funded by Australia, on infrastructure, border protection, military co-operation, sport, economics and more.

The Prime Minister is seeking to balance complex, crucial issues. He wants to treat China, poised to become the world’s biggest economy and already the nation with which Australia does most trade, as neither an economic nor a political foe.

Nor, though, can he afford to ignore China’s efforts to increase its influence in the region.
China has been funding a wide range of infrastructure in Pacific nations, in what many analysts see as a bid to use debt entrapment to gain sway, as part of its global Belt and Road trade and infrastructure program.

Separately, it has been militarising islands in the adjacent South China Sea, some of which China created, in what is also widely viewed as a threat to freedom of navigation in one of the most critical shipping routes.

From an Australian point of view, Mr Morrison’s trip, which follows the establishment of a $2 billion regional development fund by his government, a move supported by Labor, can be seen in this Chinese context.

But from the perspective of Pacific nations, Australia is letting the region down through insufficiently robust policies to cut carbon emissions.

Fijian Prime Minister Frank Bainimarama said: ‘‘We cannot imagine how the interests of any single industry can be placed above the welfare of Pacific peoples and vulnerable people the world over.’’

Mr Morrison assured him Australia would meet its commitments under the Paris climate accord, and would, in the meantime, be funding projects to protect the island nations from the effects of global warming.

The Coalition government’s frequent claim of success in meeting carbon emissions is highly assailable. Research finds emissions reductions have been driven since 2005 by reduced land clearing and increased forestation, energy efficiency and a marginal reduction in power emissions as renewable energy grows.

Emissions reductions are forecast to stagnate. Australia needs to double its progress in this regard to meet the targeted aggregate fall of 26 to 28 per cent by 2030.

The cost to the world of failure in this challenge is beyond calculation. This they already sadly know in the Pacific.